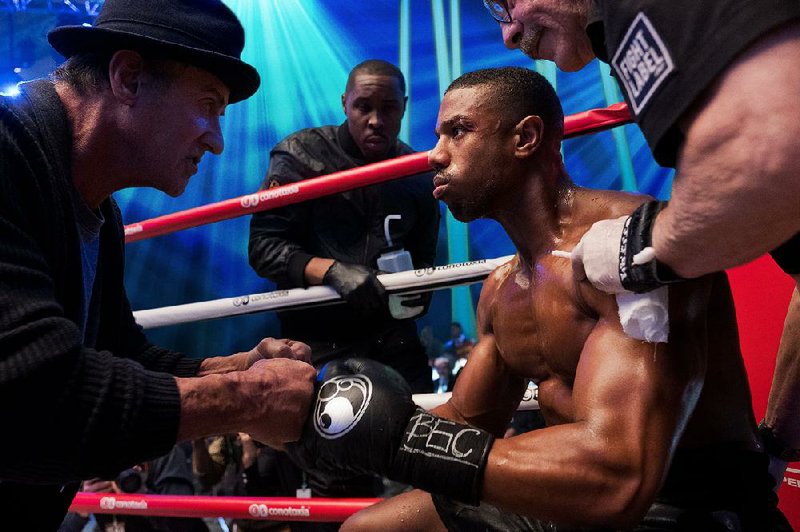 Ivan Drago (Dolph Lundgren) was always one of Rocky's most ridiculous villains. A refugee from a cut-rate wrestling circuit, he was a giant, steroid-fueled Soviet machine with a Detlef Schrempf hair buzz, and a perpetual sneer, along with his equally haughty hyper-buxom wife (Brigette Nielsen).

Rocky IV was less a narrative film than a hyperbolic comic strip, forgoing any of the original film's restraint and maturity in place of a big, dumb WWE-level good vs. evil spectacle. Having watched his friend Apollo Creed (Carl Weathers) literally get punched to death in the ring by this behemoth, Rocky (Sylvester Stallone) eventually takes to the rugged Russian outdoors, training by carrying logs up hills, and sprinting along frozen mountain roads in heavy workboots, while his Ruskie counterpart enjoys high-tech punching machines and a steady stream of steroid drips.

Rating: PG-13, for sports action violence, language, and a scene of sensuality

As with all fights in the Rocky series -- if not 99 percent of boxing movies in general -- the winner of a given bout isn't the biggest or strongest, or even the best prepared physically, it's the fighter who has his emotional life most in order, the one whose moral compass is most clearly pointed.

When Rocky beats the Russian -- and any longer camera shots showing the fight between the 5-foot-9-inch Stallone and the towering 6-foot-5-inch Lundgren resembled a sasquatch facing off against a feisty bear cub -- and earns adoring applause from the Soviet crowd, it wasn't because of his superior training, or his strategy of getting hit in the head nearly every time Drago threw a punch. It was because he was the better man.

Stallone has written five out of the now-eight film series, so you can clearly imagine the well has pretty much run dry in Creed II as far as plot mechanics go. Shortly after Adonis Creed (Michael B. Jordan) wins the heavyweight belt -- much less of an accomplishment in the era of alphabet boxing associations with nearly random title-holders, but still -- he is called out by Drago, and his thoroughly imposing son, Viktor (Florian Munteanu), a boxer of some repute in his and his father's cold and gray Kiev, where Ivan had been deposed shortly after losing his fight against Rocky.

Flying into the match without a clear sense of what he's doing or why, Adonis is quickly and brutally dispatched by the colossal Viktor, who breaks his ribs and ruptures the American's organs en route to being disqualified for a final punch after Adonis had already crumpled to the canvas.

Beaten, bowed and actually scarred, Adonis goes on a journey of soul-searching with his wife, Bianca (Tessa Thompson), and their baby daughter in tow -- coming after the fighter has left his Philadelphia hometown and moved out to L.A., which is just ugh -- but it's only when Rocky reappears in his life to offer bits of old-world wisdom and solid training tips, that things begin to come back together for Adonis.

Alluding to the first Drago film, Rocky takes Adonis out of the confines of a gym and to the desert, to train with a bunch of former-convict looking fellows, who apparently can't even afford proper heavy bags and use strings of hung spare tires instead. Slinging (literal) sledgehammers, and sprinting for miles down desolate desert highways, Adonis reaffirms his sense of self, even as Viktor and father are restored in triumph back to Moscow and train in a vast, nearly empty arena.

The interesting thing here is somehow Stallone and co-writer Juel Taylor don't fall prey to Rocky IV's penchant for black and white facileness. Instead of writing Viktor as yet another merciless Russian robot in his father's vein, the nearly wordless son is shown to have an equally heartfelt and compelling reason to win: To earn Ivan's love, and avenge what he sees as his father's unfair banishment from their home and the loss of respect for his family by the Russian oligarchy.

As such, the final fight between the two combatants back in Moscow doesn't quite square as easily in terms of your rooting interest. We know very little about Viktor (he literally doesn't say a single spoken word for the first half of the film, and maybe speaks three lines the rest of the way), but we see the burning love he has for his father, as beaten and washed up as he seems to be, and that feels no less worthy than Adonis' quest for masculine fulfillment and the restoring of his own father's name.

The film also offers an interesting commentary on how the series' racial politics have shifted: The bedrock of the original films was always Rocky, an undervalued white guy against a series of increasingly unlikely villains -- from Apollo's shuckster showmanship and Clubber Lang's animal ferocity, to the Soviet menace. With the charismatically approachable Jordan, though, the idea of "other" has been neatly turned on its head. While I suspect Stallone and Taylor go out of their way to make Viktor palpably more human -- in a world without simplistically defined racial and cultural boundaries the lines between the heroes and the villains gets deeply smudged.

Beyond that, the rest of the film's beats run more or less exactly as you have come to expect from the series (meanwhile, Stallone is busy filming Rambo 5, and The Expendables 4 -- the man truly knows how to bleed a franchise). This leaves the film, despite the best efforts of the always hard-working Jordan, more than a little emotionally flat. In Creed, director Ryan Coogler reinvigorated Stallone, and the franchise as a whole, by making it afro-centric and decidedly more downbeat and serious, so as to make the audience earn the thrilling climactic fight, and injecting the aged franchise with a jolt of much-needed juice in the process. Now, with Coogler having moved on to the Marvel Comics Universe and beyond, Stallone seems content to revert the series back to the well-worn path of loss and redemption he has written countless times before.

It's not entirely without its merits -- as much as seems rote, it's still a far cry from '80s-style cartoon buffoonery -- but just as quickly as Creed sprung up out of nowhere, this revised series already feels more than a little played out.