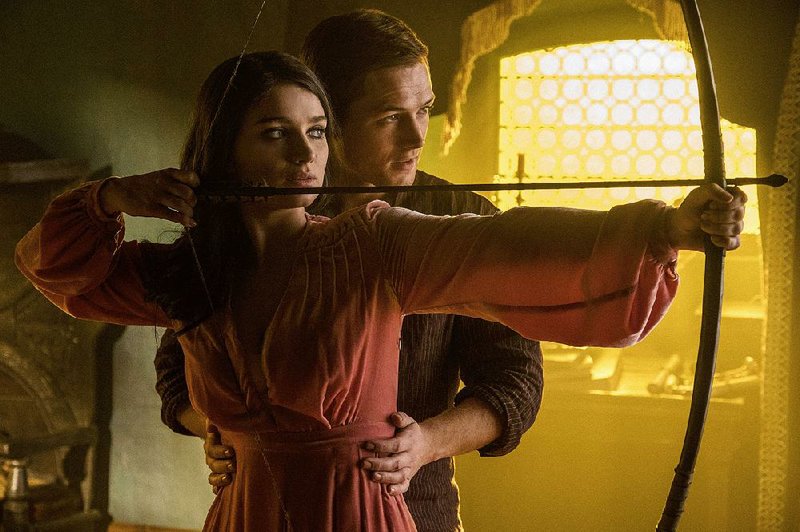 Every generation gets the Robin Hood it deserves, and the 2018 Robin Hood is sleek, modern and retrofitted for a radical political landscape. Take in that Shepard Fairey-inspired wanted poster, the woodcut-style closing credits sequence rendered in shades of red and black, our masked, hooded hero hurling Molotov cocktails, and you just might wonder: "Is Robin Hood an anti-fascist?"

But Robin Hood has always been anti-fascist, robbing from the rich and giving to the poor, living with his pals in Sherwood Forest while battling against the tyrannical Sheriff of Nottingham and disrupting abusive systems of power. He's the very definition of a radical leftist activist. The new iteration maintains the medieval setting while bringing the classic story to a contemporary thematic landscape, using a street art aesthetic and early Soviet cinematic references to position the landed lord of Loxley as a proletarian hero.

Rating: PG-13 for extended sequences of violence and action, and some suggestive references

Played by the beguiling Welsh actor Taron Egerton, this Robin Hood is younger than most actors who have taken the hood, suited in trim quilted leather and minimalist robes, sporting a clean, sharp 'do. He also has a traumatic backstory, having been conscripted to fight in the Crusades, taken from his land and love, Marian (Eve Hewson). The holy war also gets the modern treatment, as soldiers engage in guerrilla street warfare against their enemies. There are no pitched battles in sight -- this looks more like the cinematic depictions of Operation Iraqi Freedom, but with bows and arrows.

It's in battle that Robin meets his best ally, who starts as an enemy. Jamie Foxx plays a Moor warrior who stows away to England to enact revenge for his son's death, and engages Robin to help him do it. He lets Robin call him John and trains the young lord to infiltrate the inner circle of the Sheriff (Ben Mendelsohn) while robbing the coffers blind, disguised as The Hood. The idea is to take the whole enterprise down from the inside, choking off the church's funding of the war earned through brutal taxation. There's even a fun little Reagan-era Iran-Contra twist to that too.

The first time Robin Hood appeared on film was 110 years ago. The tale necessarily requires a thorough overhaul. Writers Ben Chandler and David James Kelly hew to the original lore while drawing out the parts of the character's story that make him the most sympathetic, while director Otto Bathurst gives the project a visual makeover and a jolt of adrenaline. Foxx also enlivens the proceedings, especially in the first half of the film, during the rapid-fire training montages. His breathless enthusiasm for vengeance is far more compelling than the mooning over his ex Marian that drives Robin to action.

The second half of the film loses the energy as John fades to the background while Robin, Marian and a love rival, Will Scarlet (Jamie Dornan), struggle for control of a jumbled uprising. Stylistically, it seems to take its cues straight from Sergei Eisenstein's revolutionary 1925 film Strike with plenty of high-contrast images and low angles, the action racing along the rickety, scaffolds of the mining community crushed under the Sheriff's boot. It is certainly visually striking, though the story loses steam. And while it plays fast and loose with loaded political iconography, this Robin Hood has brought a whole new dimension to this age-old tale. 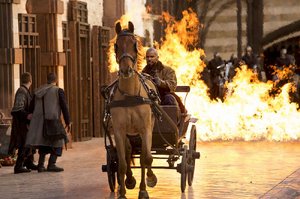 Little John (Jamie Foxx) is a Moorish veteran of the Crusades who joins forces with the title character in Robin Hood.