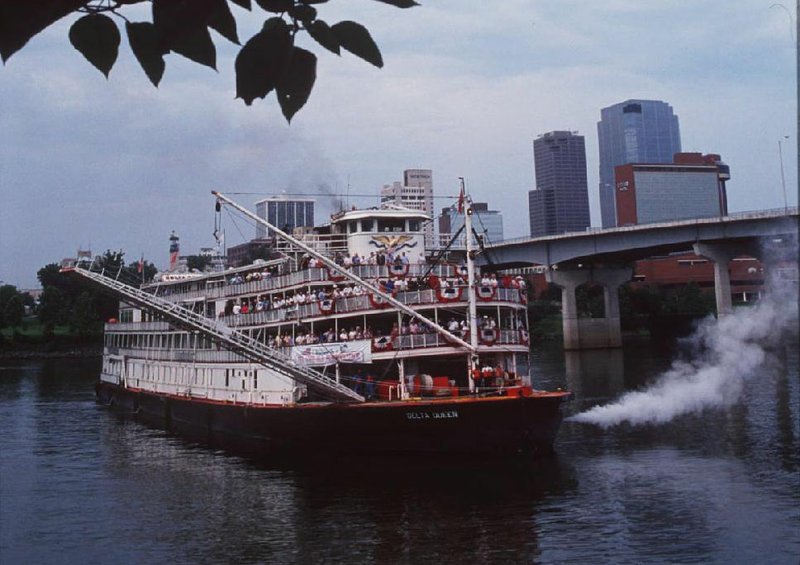 The Delta Queen readies for docking at Riverfront Park in North Little Rock.

WASHINGTON -- Siding with travel enthusiasts and history buffs, the U.S. Senate this month voted to exempt a wooden 1920s steamboat from a 1960s federal fire safety law, despite objections from public safety officials.

If the House adopts the same provisions and the White House signs on, the way would be cleared for the Delta Queen to resume overnight cruises after a decadelong hiatus. The legislation is the latest of several attempts to get the exemption through Congress.

Built before the Great Depression, the ship has been a National Historic Landmark since 1989. In 2016, the National Trust for Historic Preservation placed the Delta Queen on its annual list of America's 11 Most Endangered Historic Places.

Martin has been working since 2012 to obtain an exemption to the law, sometimes referred to as the Safety of Life at Sea Act. Over the years, he's made dozens of trips to the nation's capital in an effort to sway lawmakers.

"I spent a lot of time here nurturing this effort and trying to convince folks in Washington to help support us," he said.

The Delta Queen is based in Houma, La., and would need millions of dollars in improvements before it would be ready to ply the waters again.

But the money is worth spending if an exemption is granted, Martin said.

"Being a National Historic Landmark, a national treasure, she's still very viable and she's got too much history to just give up on," he added.

In 1966, Congress passed a law prohibiting passenger vessels with rooms for 50 or more people from plying the waters overnight unless those vessels are made of fire-retardant materials.

According to its website, deltaqueen.com, the boat can accommodate 176 passengers in "88 well-appointed climate controlled staterooms." Much of the Delta Queen is made of wood.

For decades, Congress periodically approved exemptions so the Delta Queen could continue carrying passengers along the Mississippi and its tributaries.

The last exemption ran out in 2008. The steamboat occasionally traveled up the Arkansas River and was last in Little Rock in 2007.

The new exemption, which would last until December 2028, was included in the Senate's version of the Coast Guard reauthorization bill, despite safety concerns raised by the Department of Homeland Security; U.S. Sen. Ben Cardin, D-Md.; and others.

"The Delta Queen is an old ship made of wood," Cardin noted during Senate debate. "I understand that supporters of this provision are concerned about the historic preservation of this ship and the economic opportunities that operation of the ship could bring to its home port, but we should be concerned first and foremost with the safety of the people who will work on the ship and vacation on the ship."

The legislation, with the exemption included, passed the Senate 94-6 on Nov. 14.

The Senate had already approved a stand-alone piece of legislation in April 2017 authorizing an exemption for the Delta Queen. That measure, which was co-sponsored by U.S. Sens. John Boozman and Tom Cotton, both R-Ark., passed by a vote of 85-12, but has been bottled up in the House. Similar legislation passed the House in 2013, but stalled in the U.S. Senate.

Martin said $10 million to $12 million in upgrades are planned, including installation of new, modern boilers, generators, and an improved heating and air conditioning system. The paddlewheel would also be rebuilt. Additional exit routes would be added.

If the Delta Queen returns to the water, it will journey along the Mississippi River, with periodic trips along the Arkansas River as well, Martin added.

U.S. Rep. Rick Crawford, a Republican from Jonesboro whose district includes the Delta, said he hopes to see the steamboat resume its travels.

"It's got historical significance and it certainly has a multiplying effect in our rural economies," he said. "This boat can go up and down the river and create an economic impact that we might not otherwise receive."

Boozman, a longtime supporter, said he's hopeful that the Delta Queen will clear any remaining hurdles and return to work.