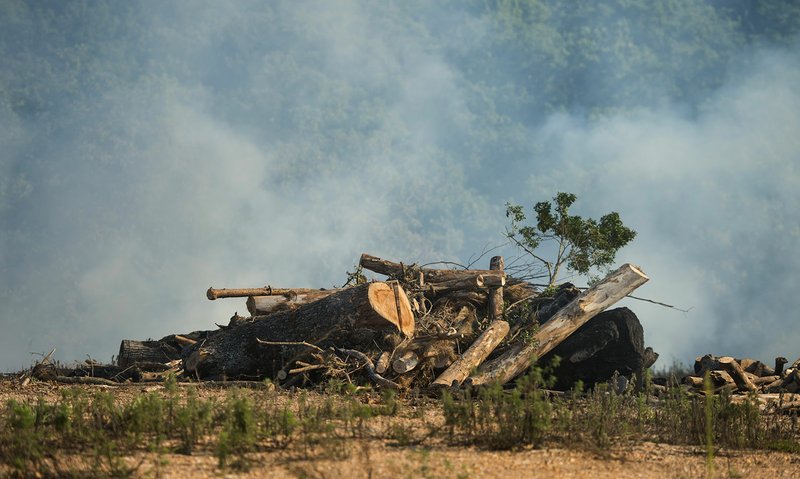 BELLA VISTA -- A family sued a tree care company Tuesday, claiming an underground fire at a former stump dump it owns is responsible for respiratory illnesses and creating a nuisance damaging the value of their property.

The lawsuit, filed on behalf of Curtis and Tiffany Macomber and their sons, Ezra and Trevor, accuses Samuel Care Enterprise, doing business as Brown's Tree Care, of negligence for causing the fire and failing to properly manage it and creating a nuisance because hazardous smoke emitted by the fire is coming onto their property.

Prior to Brown's Tree Care acquiring the property on Trafalgar Road from Bella Vista, the site was used to dump various kinds of waste, including hazardous substances, according to the lawsuit.

The family claims respiratory problems they experienced wouldn't have occurred without the fire. The suit demands the company extinguish the fire and pay unspecified monetary damages.

The Macombers are represented by the Bailey and Oliver Law Firm.

Frank Bailey said the harm caused by this fire, which started in early August, hasn't been fully investigated. He said residents have experienced respiratory illness.

"This is just a tragic occurrence that happened to the residents there in Bella Vista, and we're trying to remedy that in any way we can," he said.

Fire Department personnel previously said the fire started because of a controlled burn on the property and trying to fight the fire, which may be burning more than 50 or 60 feet underground, could wash ash into the nearby watershed.

Cletis Wilkins, owner of Brown's Tree Care, has denied having a controlled burn on the property.

Wilkins previously said his workers have dumped red clay on the smouldering ground and packed it down to smother the fire and he believes it's mostly out.

The Arkansas Department of Environmental Quality ordered the company to cease any dumping activity at the site earlier this year.

Earlier this month, personnel from the federal Environmental Protection Agency collected air quality samples at the request of ADEQ.

Once a lab has analyzed the samples, it will send data to the Arkansas Department of Health, which will make recommendations to regulatory agencies based on whether the data show a significant amount of harmful compounds. Results are expected this week.