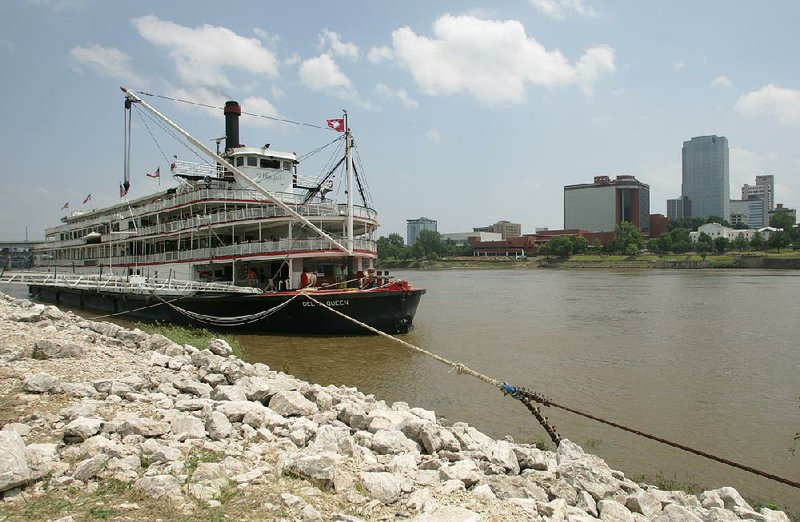 The Delta Queen, shown on the North Little Rock shore of the Arkansas River in 2007, will once again be able to ply the Arkansas and Mississippi rivers on overnight cruises after the U.S. House voted Tuesday to exempt the largely wooden steamboat from federal fire safety laws. The 1920s-era paddle-wheeler, now docked in Houma, La., will have to undergo extensive restoration.

The provision was included in a U.S. Coast Guard reauthorization bill that sailed through the House. The legislation containing the decade-long exemption had passed in the U.S. Senate earlier this month.

The Delta Queen, which made regular trips on the Mississippi River and occasional journeys on the Arkansas River, is in Houma, La., awaiting repairs.

Its last exemption expired in 2008.

By a voice vote, the House concurred with the Senate changes.

"We're thrilled, of course. This is a victory that's 10 years in the making. A lot of people deserve a lot of credit," he said shortly afterward.

Once the bill is signed into law by President Donald Trump, Martin can focus on raising the $10 million to $12 million it will take to restore the paddle-wheeler, he said.

Among other things, the company plans to replace the ship's boilers and its generators. The paddle wheel will be rebuilt from the shaft up. A new heating-and-air-conditioning system will be installed. Safety systems will also be upgraded.

Martin said he plans to resume trips up the Arkansas River once the steamship returns to service.

In order to qualify for the exemption, the Delta Queen will have to warn prospective passengers that the vessel "does not comply with applicable fire safety standards due primarily to the wooden construction of passenger berthing areas."

It's a warning the Delta Queen had previously offered its passengers, Martin noted.

The ship's owner or operator also must "make annual structural alteration to not less than 10 percent of the areas of the vessel that are not constructed of fire retardant materials," according to the bill.

The goal is to avoid the kind of catastrophe that destroyed the SS Yarmouth Castle more than a half-century ago.

Just after midnight, on Nov. 13, 1965, the vessel caught fire while traveling between Miami and Nassau, Bahamas. Because of its wooden superstructure, the flames spread quickly; 88 passengers and two crew members lost their lives. Hundreds were rescued by other ships.

In 1966, Congress passed a law prohibiting passenger vessels with rooms for 50 or more people from plying the waters overnight unless those vessels are made of fire-retardant materials.

The Delta Queen's owners sought and eventually obtained a series of exemptions to the law, allowing the ship to continue carrying overnight passengers despite its largely wooden superstructure.

Critics say the exemptions are unwise.

The Department of Homeland Security objected to the latest proposal, according to Roll Call, a Capitol Hill newspaper. The U.S. Coast Guard has also voiced concerns.

In 1976, the U.S. Department of Transportation encouraged then-President Gerald Ford to veto a similar exemption, saying it had "consistently opposed legislation to prolong the service of the Delta Queen on the ground that the vessel, constructed primarily of wood, and operating in the overnight passenger trade, presents an unacceptable risk in regard to fire safety."

The White House even drafted a "memorandum of disapproval" for Ford to sign laying out the rationale for scuttling the bill.

The documents were posted online by the Gerald R. Ford Presidential Library.

"The fire hazard inherent in a wooden passenger vessel is too high a price to pay for yet another five years of exemption from the applicable safety laws," it stated. "I understand that there is no practical way that the Delta Queen can be modified to make her acceptably safe for overnight cruises, despite efforts to apply modern technology to the problem."

Ford ultimately decided to sign the legislation, saying it would "preserve a splendid reminder of America's past."

The exemptions have been politically popular. Lawmakers from states bordering the Mississippi River have repeatedly championed them, arguing that the ship's owners had taken appropriate safety.

News releases issued by the Delta Queen's Senate backers this month refer to the vessel as a "historic, wooden American steamboat."

The ship's overall composition is slightly more complex, according to Martin.

While the superstructure is largely wooden, the Delta Queen, by weight, is 75 percent steel, Martin noted.