Transit deal to assist homeless in central Arkansas; aim is free rides to work to help get people off streets 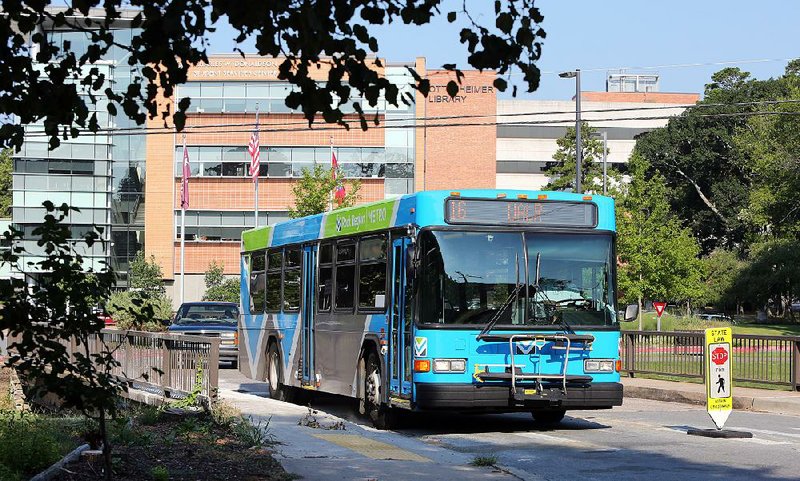 A Rock Region Metro bus makes its way through the University of Arkansas at Little Rock campus in this 2017 file photo. ( Jeff Mitchell)

Rock Region Metro has agreed to partner with a coalition of homeless organizations to address what people on the street say is their most vexing barrier to getting a job and, in turn, a home -- access to transportation.

Sandra Wilson, president of the Arkansas Homeless Coalition, said a survey of homeless people in central Arkansas found that the lack of transportation overwhelmingly is the most common hurdle homeless people say they face.

Other communities have provided free bus passes to homeless people. Lexington, Ky., for instance, began such an initiative earlier this year. But Wilson said she knows of no other community that integrates transportation access into a plan to help get homeless people off the street.

"I think that part may be unique," she said after the meeting. "I think that's what is going to make ours effective."

Not just anyone on the street would be able to obtain a bus pass. A person would have to be working toward getting his life stabilized and eventually into a home to qualify.

Wilson explained the plan using the following example: Someone goes into the emergency shelter at Our House, one of the providers that is part of the homeless coalition. Our House personnel then develop a plan beginning with the organization's career work center, to help the person find employment "and then you can move along into getting housing and actually getting your life stabilized," Wilson said.

"There you've got the connection from the person living on the street to the service provider," she said.

Our House then "would go in and put in the referral that this person needs that monthly bus pass to be able to work their plan exiting homelessness," Wilson said.

Details on a final agreement remain to be worked out, but she and transit officials say they would like to have the plan in place by January.

B.J. Wyrick, a Little Rock city director who helped broker the agreement between the homeless organizations and Rock Region, said it is part of a broader effort to not only aid people on the street but get them off the street.

"It fits with the Arkansas Homeless Coalition's plan to start in identifying and taking care of the problems that keep people from being able to eliminate homelessness," Wyrick said. "This starts the process.

"We will be looking at individuals who are on a certain path to eliminate homelessness, like those who are seeking education, those that are looking for jobs. We're going to target a group to take care of the transportation piece. We have a lot of things to work out in regards to how the bus passes will be set up, how we'll manage them."

The proposed agreement was listed as an "item for discussion" for Tuesday's meeting, and no vote by the transit agency's board was expected. But acting Chairman Bentley Wallace suggested that the board hold a vote to avoid delaying implementation and provide the agency's director, Charles Frazier, broad authority in executing the final agreement. As a result, the board won't hold a regular meeting next month.

Among the details to be decided is which organizations will be part of the final agreement.

All are nonprofit organizations that represent smaller providers who serve different homeless populations.

"We don't want anyone left out," Wilson said. "We have a lot of small providers who are vital to the total system, but they are usually left out because the big guys are the ones that get the glamour. But those little guys, we can't go forward without them because those little guys are out there really doing this" work.

The fare agreements have produced 278,000 passenger trips since 2016, although Justin Avery, the agency's assistant finance director, said some who are using the passes under the fare agreements may already have been riding the buses.

Print Headline: Transit deal to assist homeless in central Arkansas; aim is free rides to work to help get people off streets