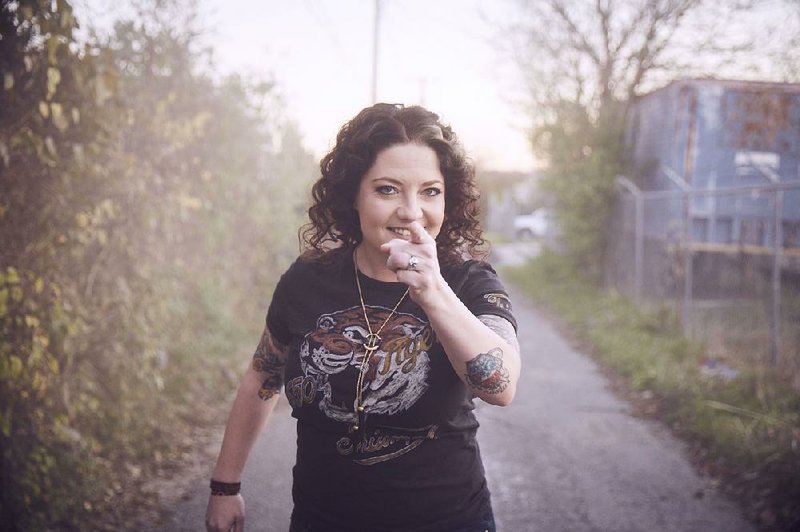 Ashley McBryde has been trying to get rid of her for a while now, but it seems the fat, bikini-clad baby devil isn't going anywhere.

"It's the most embarrassing tattoo I have," the inked-up singer-songwriter says with a chuckle. She's talking about her first tattoo, which she got when she was an 18-year-old music major at Arkansas State University at Jonesboro.

"I hate to call them tramp stamps," she says of its spot on her lower back, "but that's the location."

"I've asked people to cover it up, and even Nancy says 'Absolutely not. I'm not covering that tattoo.'"

All of this comes to light at the end of a nearly 20-minute interview with McBryde, whose breakout album, Girl Going Nowhere, has her going lots of places, including a tour stop with her band at Little Rock's Rev Room on Friday. Alabama singer-songwriter Dee White will open.

The 35-year-old McBryde, the youngest of six siblings, grew up on her family's cattle farm in Mammoth Spring.

"Nothing huge. We had about 35 to 40 head of cattle and we worked really hard," she says. "I wouldn't trade the way I grew up for anything."

There was no Internet and only three channels on TV, but there was the radio and McBryde would listen to disc jockey Mike Crase play the hits in the afternoon on K-Country 95.

"That's part of the reason I stand on a stage every night with a guitar," she says. "My heroes -- Patty Loveless, Lorrie Morgan, Trisha Yearwood, Mark Chesnutt -- they all came through my radio thanks to Mike Crase."

She sings about this on Girl Going Nowhere's "Radioland," which name checks Townes Van Zandt and Johnny Cash, and is a celebration of the joys of local radio.

The album could be the soundtrack to a rural Saturday night with a bottle, and maybe a little something stronger, in the glove box. There are songs about heartbreak ("Andy (I Can't Live Without You)"), drug abuse ("Livin' Next to Leroy") and getting out even when everyone says you never will (the inspiring title cut).

It's McBryde's Warner Bros. debut after a couple of self-released efforts and 2016's indie EP Jalopies & Expensive Guitars. The record is country with an undeniable rock 'n' roll streak and has gotten her comparisons to Miranda Lambert, Brandy Clark and Eric Church. The songwriting is smart and manages to avoid hoary, mainstream country cliche, especially on tracks like "Livin' Next to Leroy," whose dark subject matter -- junkies, death -- is wrapped around a disarmingly upbeat arrangement broken by a blistering guitar solo.

McBryde worked at a Guitar Center in Memphis before moving to Nashville, where she wrote songs and played wherever she could. She had a loop of biker bars, sports bars and other venues in surrounding states, including Arkansas, that she would tour monthly in her pickup, learning how to perform in front of all kinds of crowds.

Buzz really started building around McBryde last year with the release of the single "A Little Dive Bar in Dahlonega," a tribute to resilience and the power of music. She was praised by The New York Times, the Los Angeles Times, NPR, Rolling Stone and others. She has performed on Late Night with Seth Meyers and Jimmy Kimmell Live! and sold out her first headlining show in England.

"It's a mixture of feelings. Some I expected, some I did not," she says of all the attention. "There's a side no one told me about. You've gotten all the 'nos' you're going to get for a while and you're in a period of 'yesses.' It's good stuff, but somewhere in your mind somebody pushes the I'm-not-worthy button and you go, 'Oh, man, are we good enough to deserve this?' It's a strange balance between staying humble and remembering why you are here and accepting that you are here. And just because there's a certain amount of success doesn't mean the work is done."

If you want to know about what kind of performer McBryde is, look up the video of her debut at the Grand Ole Opry from June last year.

There she is, sporting a vest over a short-sleeve Johnny Cash T-shirt, alone with her guitar in the spotlight singing "Girl Going Nowhere," which she co-wrote with Jeremy Bussey.

The song is about proving wrong all those people who said you'd never amount to much, who told you to give up on your dream of making music for a living. It's a song of well-earned defiance and steely confidence that can make the hair on the back of your neck stand up. It's like the Rudy of country songs.

During that Opry performance, an emotional McBryde gets choked up and flubs a verse, but it doesn't matter. The crowd cheers her on, giving her a standing ovation as she finishes triumphantly.

It was, she says, "like a religious experience. I came offstage that night and said to the band, 'We just changed our lives.'"

They've returned to that stage often, but it never gets old.

"We just did our eighth Opry performance, and it always feels important."

Coming back to Arkansas is always fun, she says, adding that she's looking forward to seeing not only her fans but a certain artist as well:.

"The whole band is going to see Nancy Miller to get new tattoos," she says. "We lost one of our good friends, Randall Clay, a few weeks ago. He was a brilliant songwriter and also a former professional clown with Barnum & Bailey, so we're talking with Nancy about getting a clown drawn up for us in his memory."