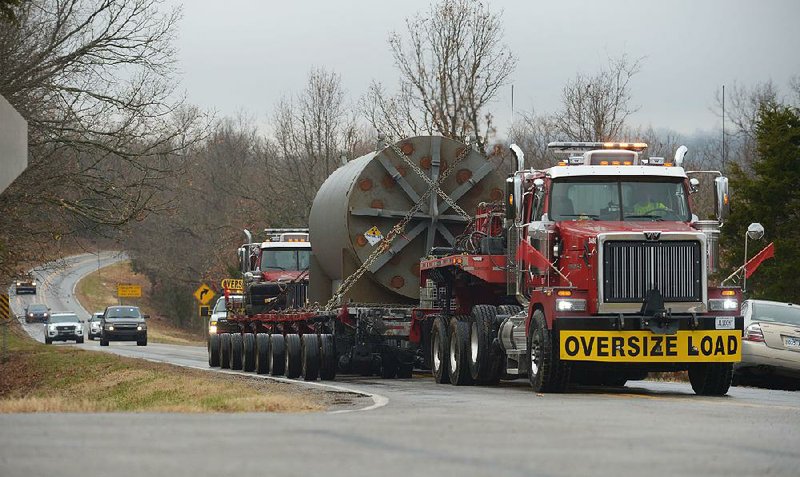 A truck transporting a part of the long-decommissioned University of Arkansas experimental nuclear reactor makes its way Thursday along Arkansas 265 to Arkansas 170 near West Fork in Washington County.

FAYETTEVILLE -- State Highway Police issued a citation Thursday morning to a driver transporting an oversize load of material from a former nuclear reactor test site, a spokesman for the state Department of Transportation said.

Material from the Southwest Experimental Fast Oxide Reactor in Washington County was headed out of state after leaving the former reactor site about 20 miles southwest of Fayetteville, said Danny Straessle with the Transportation Department.

"The driver got off-route, and we issued a citation," Straessle said.

While on Interstate 49 northbound at Greenland, south of Fayetteville, the truck hauling the oversize load failed to take Exit 58 to avoid driving over a bridge, Straessle said. The truck, a push truck behind and the load were listed on a permit as weighing 407,000 pounds.

"It was not recommended to put that load on that overpass," Straessle said.

The state-issued permit specified that the driver should "ramp-off, ramp-on," taking the exit before the overpass and then getting back on the highway after passing the span, Straessle said.

Permit information described the truck-trailer configuration as 18 feet wide and just over 158 feet long. A large, cylinder-shaped object rested on the trailer bed.

The transport marked another milestone in cleanup efforts at the former reactor site, which stopped operating in the early 1970s. Dean Wheeler, project manager with the company overseeing the cleanup, Energy Solutions, has said that nuclear fuel was removed after the reactor ceased operations.

Since 1975, the site has been owned by the University of Arkansas, Fayetteville.

In October, the reactor vessel -- the radioactive heart of the site -- was placed into a specially designed containment vessel scheduled to eventually be moved to the Nevada National Security Site. The load transported Thursday could not be confirmed as being that vessel, which was described by Wheeler in October as shaped "like a big soup can."

The Highway Police is a division of the state Transportation Department, Straessle said. The citation was not issued immediately in Greenland but at another planned exit as the truck made its way north toward Missouri, Straessle said.

The permit described escort vehicles for the large load. The escort vehicle Thursday did not take the assigned route bypassing the overpass.

"Ultimately, the transport driver is responsible for following the permit," Straessle said. "He should have taken the exit regardless of what the lead escort was doing."

The citation is similar to a traffic ticket, Straessle said.

"Whatever court takes it on has to decide if the driver needs to appear or just pay the fine," Straessle said.

The transport truck left the reactor site about 9 a.m., and Straessle said it traveled along U.S. 71, reaching the Missouri state line about 11 a.m.

The permit was issued to Barnhart Crane & Rigging, with a Memphis address listed for a company that has sites in multiple states.

Chris Teague, the company's marketing director, said there were no other issues related to the transport.

"As to what led up to the citation, we are investigating that right now," Teague said.

A $10.5 million U.S. Department of Energy grant announced in October 2016 jump-started cleanup work at the reactor site, with additional federal funding paying for a cleanup estimated by the university to cost $26.1 million.