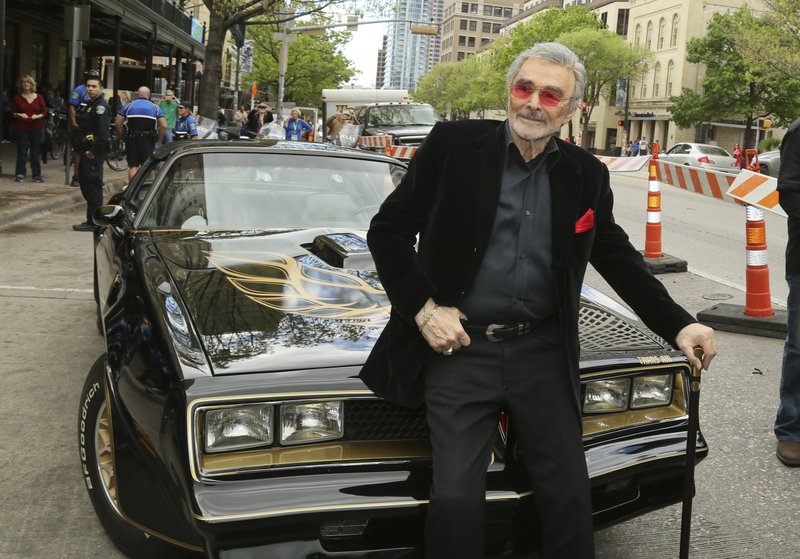 FILE - In this March 12, 2016 file photo, Burt Reynolds sits on a 1977 Pontiac Trans-Am at the world premiere of "The Bandit" at the Paramount Theatre during the South by Southwest Film Festival in Austin, Texas. Hundreds of fans in Trans Ams made it to Atlanta to celebrate the 40th anniversary of "Smokey and the Bandit." About 350 cars retraced actor Burt Reynolds' wild ride from the Texas-Arkansas line to Atlanta in the movie that roared into pop culture in 1977. (Photo by Jack Plunkett/Invision/AP)

"Eastbound and down" took on a literal meaning Sunday as members of the Small Business in Transportation Coalition headed in exactly that direction to continue their tribute to the late Burt Reynolds.

The trucking industry trade group organized a local tribute to the film actor, who died Sept. 6 in Jupiter, Fla.

With Smokey and the Bandit having been one of Reynolds' most successful films, the group chose to start the homage in Texarkana and end it in Atlanta — mainly because the Twin Cities fictionally served as the collection point in a beer bootlegging operation while Atlanta served as the fictional drop-off point. The movie not only was the second-highest theater box office attraction in 1977, when it was released, but also became a perennial favorite flick for truck drivers.

Before leaving, Lamb estimated the journey to Atlanta would take more than nine hours.

He added that this salute to Reynolds marked his first visit to Texarkana since hearing about it in the movie, around 40 years ago.

"Texarkana looks a lot more developed than I imagined it would be, but we had the best time here," Lamb said.

Upon the caravan's departure from the Texarkana Convention Center by noon Sunday, they had at least 15 tractor-trailer rigs as well as a collection of motorcycles heading east.

Truck driver Karen LaRochelle and her husband, David, both from Jacksonville, Fla., said they had never been to Texarkana before Saturday,

"Texarkana didn't look like the town the movie had standing in for it, in Georgia, but we found the people here to be very friendly," she said.

Sandra Grover of Wichita Falls, Texas, said she worked in Texarkana as a trucker in 2005 and found the Twin Cities to have greatly improved its commercial growth in the last 13 years.

Truck driver John Shipman of Tyler, Texas, said that when he first came through Texarkana as a boy with his father, it didn't look like the town he had seen in Smokey.

"I was surprised, but it looks like Texarkana is headed in the right direction," he said.