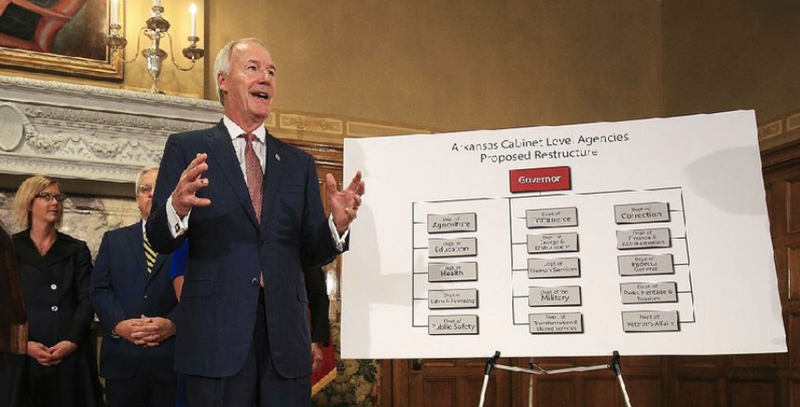 Gov. Asa Hutchinson on Wednesday proposed a state government reorganization plan that would consolidate the 42 state agencies that report to him to 15.

With about a month to go before the Nov. 6 general election in which he's up for re-election, the Republican governor unveiled what would be the most sweeping reorganization of state government since 1971. At that time, then-Gov. Dale Bumpers, a Democrat, led a successful effort to reduce the number of state agencies reporting to him from 60 to 13.

"This transformation will be done using existing resources and without decreasing staffing levels," Hutchinson said. "It improves the delivery of services to Arkansas taxpayers by breaking silos within state government and by combining agencies in a way that will allow for increased coordination within similar programs of the agencies. It improves management control ... and it provides more support and accountability to the vast numbers of boards and commissions we have in state government."

The number of full-time employees in executive-branch state agencies is 25,122. The number in the state's higher-education institutions is 28,450, and those in other constitutionally independent agencies total 5,019, said Scott Hardin, a spokesman for the Department of Finance and Administration.

Executive-branch state agencies' and regulatory boards' operating budgets are $18.5 billion in the current fiscal year, and those at the higher-education institutions and independent agencies total $10.2 billion, he said.

Hutchinson said he is seeking feedback from the public and state employees about his proposal, and "there is going to be technical corrections [and] there are going to be something that we might have missed, so we'll be listening and we'll be adjusting, as need be.

"But I think this framework is the right direction," with 15 Cabinet-level departments, he said.

If he's re-elected, Hutchinson said he plans to present his proposal to the General Assembly for its approval during the regular session, which starts Jan. 14. He said he wants his proposal to go into effect in fiscal 2020, which will begin July 1, but it won't affect the state's budget until fiscal 2021. That fiscal year begins July 1, 2020.

Hutchinson said the savings from this reorganization will be provided "through shared services, lease and rent savings, and you'll see that it maintains the independence of where appropriate for specialized state agencies or departments."

He said the state Department of Finance and Administration conservatively estimated that the savings will be about $15 million a year, starting in fiscal 2021.

"You have others in the Legislature that have bigger dollar signs in their eyes," Hutchinson acknowledged.

"I don't want to put arbitrary numbers to the savings that will be created at this point. I think it is going to take a lot more time and evaluation on it, but I think you will see as time goes on and the longer the transformation takes place, then the savings will escalate," he said.

"No decisions will be made on persons, individuals that will go into those [15] Cabinet positions until we see that the legislation has passed and then you can start planning for the future," Hutchinson said.

"Whenever you determine good policy, it should be not based on personalities, and that's an important thing for all of us to remember as we debate this historic transformation of state government," he said. He said he expects that most of the directors of the 15 departments will be called secretaries. That is similar to the federal government.

"I have full confidence in [my current] Cabinet, and they are going to have a role in my next administration if November turns out OK," Hutchinson said.

House Speaker Matthew Shepherd, R-El Dorado, who serves on the governor's Transformation Advisory Board, told reporters that "it seems to me that this [proposal] is a proper first step.

"There is more that hopefully in the future we can do, but at the same time you have to set the table at the outset," he said. "I think that this is a plan that a majority of the Legislature can support. ... There is nothing that stands out in my mind as being particularly controversial."

Sen. Bruce Maloch, D-Magnolia, said in an interview, "I'll approach it with an open mind.

"I've got some concerns and some of my concerns have been in the [Agriculture Department] and making sure we keep funds separate and keep those boards and commissions in place," he said. "I am a great supporter of career education, but I want to make certain, if it's put in one big agency, that it doesn't become a stepchild."

Under the governor's proposal, the Department of Commerce would be created by consolidating the Economic Development Commission with the Development Finance Authority and the Aeronautics, Workforce Services, Insurance, Securities and Bank departments. That would allow "for a look at efficiencies down the road from space to human resources," the governor said.

The departments of Parks and Tourism and Arkansas Heritage would be merged into the Department of Parks, Heritage and Tourism.

"We looked at a lot of those, but in our listening tour and the comments [received] we didn't think dividing Parks and Tourism was a good idea and that they are really integrated and so we kept them together. But we put that with Heritage into the Department of Parks, Heritage and Tourism so that's the fit that was a consensus that will provide efficiencies and continuity of mission," Hutchinson said.

He said he wants to merge the departments of Higher Education and Career Education into the Department of Education, which also would get the Martin Luther King Jr. Commission and Arkansas Better Chance pre-kindergarten program to improve coordination. 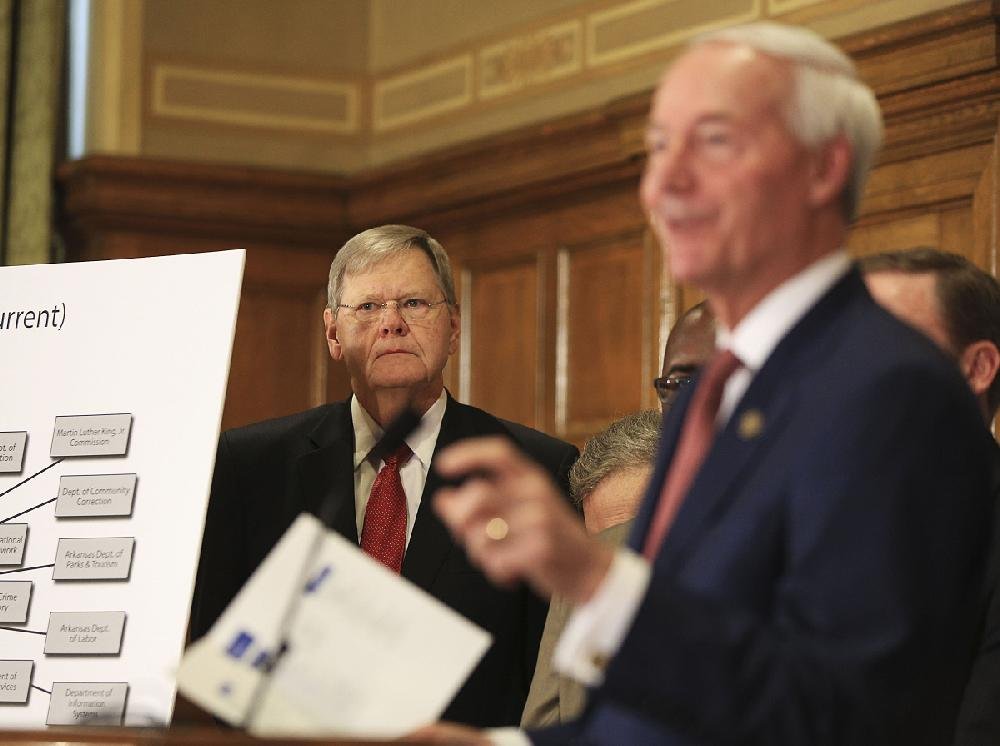 The governor said the Department of Agriculture would maintain its consistent mission supporting the farming industry, and the Natural Resources Commission would be merged into that department to allow for more coordination.

The governor said more than 200 boards and commissions would be placed under larger umbrella departments. For example, he said various health-related boards, such as the state Board of Optometry and Nursing and Medical boards would be placed in the Department of Health.

"It is important to note that these boards and commissions will maintain their supervisory licensing authority, along with their commission as they do now, and their special revenues will stay in place," Hutchinson said.

He said he is proposing the creation of the Department of Labor and Licensing to merge occupational and professional licensing commissions and boards.

The Department of Finance and Administration would continue to be the lead state department on budget, revenue and administrative matters and add the Assessment Coordination Department under this proposal, while the Department of Human Services would have minor changes, Hutchinson said.

Some agencies will remain independent and not be in a Cabinet agency: the Claims Commission, Arkansas Educational Television Network, Disability Determinations for Social Security Administration, Public Defenders Commission and State Board of Election Commissioners.

"Of course, we recognize the independent constitutional authority of the Game and Fish Commission and Highway Commission," said the governor, who appoints the members of the two commissions. The proposal also doesn't affect constitutional officers such as secretary of state and attorney general.

In 2003, Republican Gov. Mike Huckabee led the last major effort to reorganize state government. He won the state Senate's approval for his bill to realign 53 agencies into 10 departments, but the measure failed to clear the House of Representatives. The Democrats controlled the Senate and House back then. Republicans have controlled both chambers since 2013. Also, the Health Department merged with the Human Services Department, but then were separated again.

Through attrition, reorganization of state government and improved delivery of services, Hutchinson said he's reduced the number of employees in agencies under his control by 1,500, to a total of about 25,000 state employees.

Both of Hutchinson's election rivals criticized his proposed reorganization.

"Arkansans deserve bold leadership that solves our problems, not rearranges them," Democrat Jared Henderson said in a written statement. "It's clear Gov. Hutchinson is still stuck in the 40-year-old political debate of bigger government versus smaller government rather than tackling our state's most critical problems."

Libertarian Mark West said in a written statement that "our Governor has had 4-years to come up with a plan and I'm disappointed that this shuffling of the deck was the best he could come up with in that time.

"He recognizes overlap and redundancy but fails to really manifest them into sizable cuts. His big government allies aren't going to lose much sleep over his plan," West said. 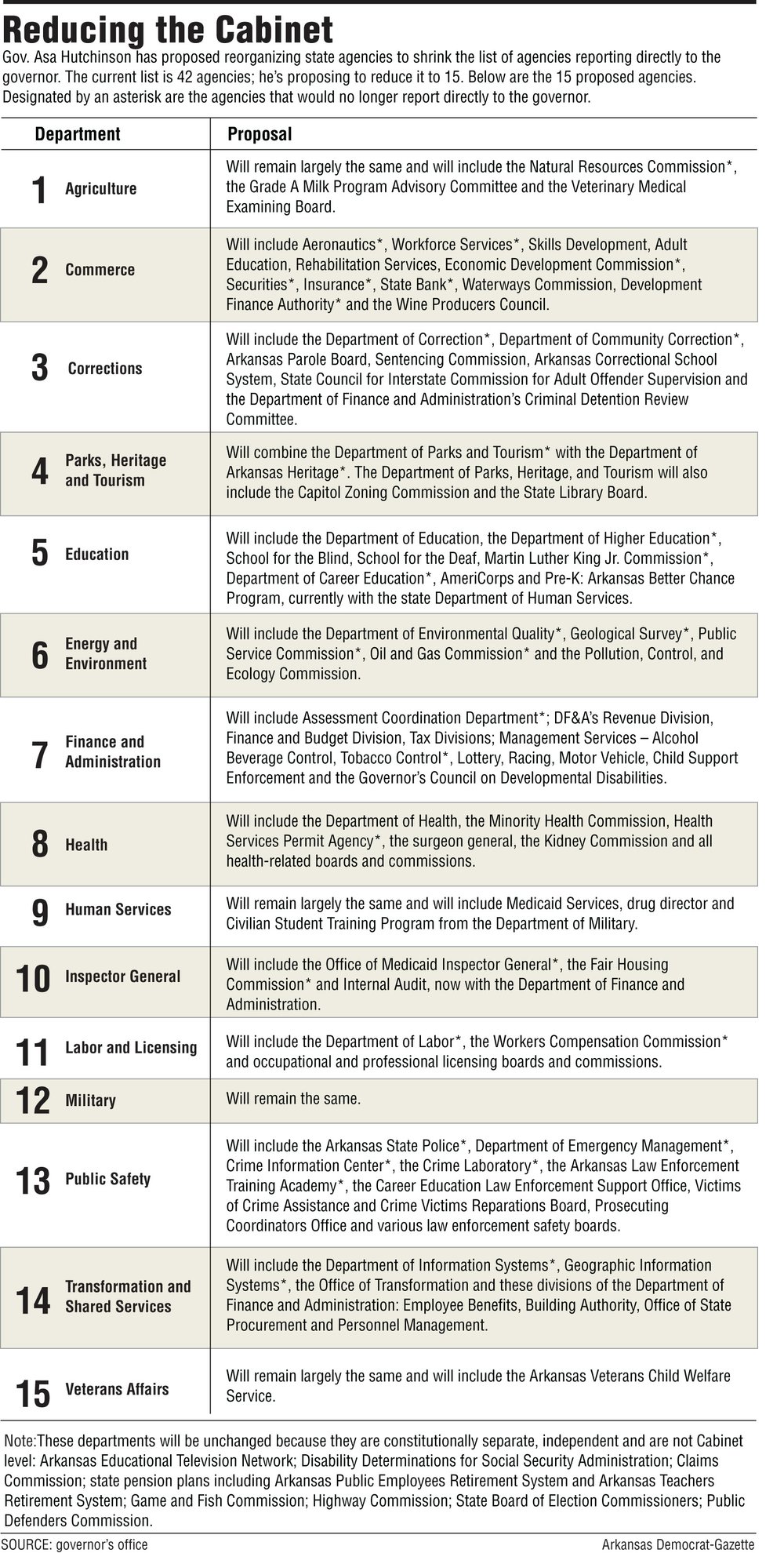