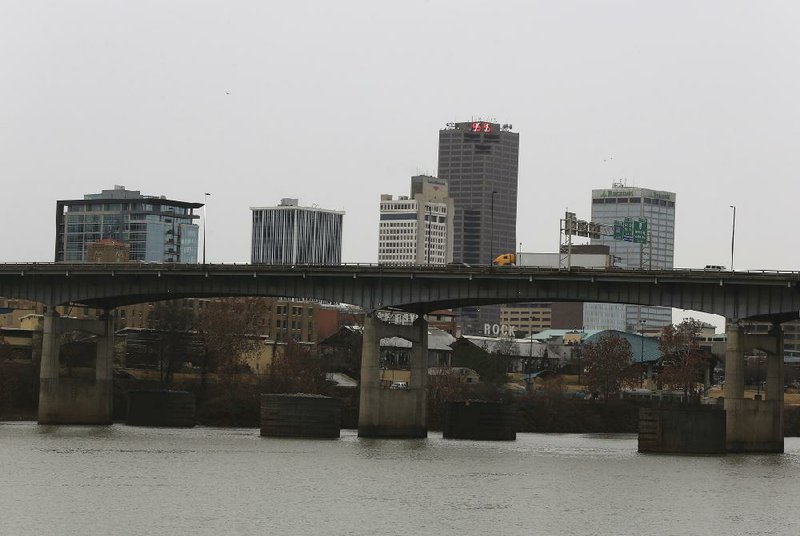 FILE — The Interstate 30 bridge over the Arkansas River is shown in this 2014 file photo. ( Staton Breidenthal)

The Arkansas Department of Transportation has yet to finalize the nearly 4,000-page environmental assessment of the $630.7 million project to renovate the Interstate 30 corridor through downtown Little Rock and North Little Rock.

As a result, the department sought a modification of the transportation improvement plan for central Arkansas to allow money identified for the project to be obligated in the federal fiscal year that began Monday. The plan had anticipated it being obligated in the previous fiscal year.

Staff at Metroplan, the long-range transportation planning agency for the region, called the modification "appropriate" at the agency's monthly board meeting Wednesday. It did not require a board vote.

"We're notifying the board because of the high-profile nature of this project," said Casey Covington, the deputy director for Metroplan.

Ben Browning, a top official at the state Transportation Department, said trying to wrap up the work before the ending of the previous federal fiscal year left them with too little time.

"It was really tight before," he said. "The federal fiscal year ends at the end of September. If we didn't hit that end-of-September deadline, we were going to have to move it to 2019. Of course, it's October so we missed it.

"We still hope to get everything done prior to the end of the 2018 calendar year, but it is in the 2019 fiscal year."

The department is seeking Federal Highway Administration approval of the environmental assessment, which would clear the way for the project to be built.

Part of the approval process is a federal review of the department's responses to comments for and against the project that came in during and following a public meeting in July, nearly three months ago. More than 350 comments were submitted, according to the department.

"They sent back some comments on our comments and so we're resolving those now," he said. "So in the next couple of weeks we're going to to submit the environmental assessment to them officially."

Once the environmental assessment is submitted, the federal agency will consider whether a more intensive review, called an environmental impact statement, is warranted for the project, Browning said.

"It is still going to be an environmental assessment at this point," he said.

Browning said he doesn't expect the latest delay to affect when construction will begin, likely some time in the second half of 2019.

Given the many moving parts of the largest infrastructure project the department has undertaken, deadlines have been soft. A year ago, for instance, federal approval had been anticipated in March.

Four years in the making, the project is designed to ease congestion and improve safety in the corridor, where six major highways or interstates come together in less than 7 miles. The I-30 bridge over the Arkansas River, built for $5 million in the 1950s and carries 124,000 vehicles daily.

The 10 lanes include six through lanes that the section has now and four additional lanes for local traffic between Little Rock and North Little Rock.

The project also will eliminate the partial cloverleaf interchange used to funnel traffic to and from downtown Little Rock, and replace it with a split diamond interchange farther from the Arkansas River bridge.

Under the preferred alternative, I-30 will have continuous frontage roads between East Fourth Street and Interstate 630 and some changes will be made to Little Rock streets, including widening East Second Street to four lanes and re-striping East Fourth to three lanes.

Browning said he hopes to have a recommendation on the team that will complete the design and build the project in time for the Arkansas Highway Commission to consider at its Jan. 9 meeting.

Transportation department staff has been working with three potential teams on their requests for proposals. Once the team is picked, the department will have up to six months to refine the final agreement to ensure all the environmental commitments and commitments to the cities of Little Rock and North Little Rock are incorporated into the agreement, Browning said.

"We've allotted up to six months to do that," he said. "We don't think it will take that long. You're not going to see major changes, just refine it working with that one team that is selected. That just simplifies the process in making sure all commitments are incorporated into the project."