Cooper will geek out about Star if you let him 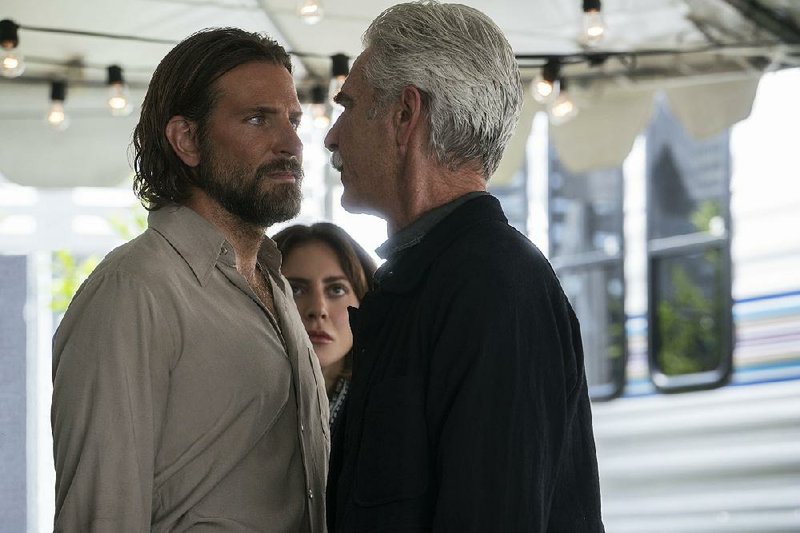 Jackson Maine (Bradley Cooper, left) is confronted by his brother, Bobby (Sam Elliott) while Ally (Lady Gaga) looks on in A Star Is Born.

Bradley Cooper sits hunched over his phone, eyes glued to the screen. He will find the stills he saved from Lady Gaga's screen test for A Star Is Born, even if it takes all morning. Only he calls her by her real name, Stefani, of course.

"It's very distracting. Where is it?" he says, scrolling through photos. "I really wanted to show you this. Sorry, it's such a beautiful -- you'll understand what I'm talking about."

It is a Wednesday morning in mid-September, and Cooper apologizes a few more times for his scattered mind. He recently returned from the Toronto International Film Festival, where his rendition of A Star Is Born, the fourth (or fifth), earned reviews even more positive than the ones from its Venice debut. As he sips on a double espresso in an ornately decorated room off the Jefferson Hotel lobby -- he describes the space as "Eyes Wide Shutty" -- palpable passion for discussing his directorial debut emerges victorious over sleep deprivation.

Oscar buzz is nothing new to Cooper, 43, who joins the likes of Gregory Peck and Marlon Brando in being one of just 10 actors to receive nominations three years in a row. But this awards season will be his first as a director -- and one who even skeptics are starting to take seriously. Gone is the humbly handsome Bradley Cooper known for playing sidekicks and jerks. Here comes the humbly handsome and potential auteur Bradley Cooper known for starring in Oscar-nominated movies of the "American" variety and, now, for rejuvenating a jaded Hollywood narrative.

With A Star Is Born, which opens today, Cooper steps into shoes worn before by Fredric March, James Mason and Kris Kristofferson in playing the male lead. Jackson Maine is a hard-drinking, pill-popping musician who discovers and quickly falls for a struggling singer named Ally (Gaga, who follows Janet Gaynor, Judy Garland and Barbra Streisand). Her career takes off as his crumbles, a process sped up by his battle with addiction, and tasteful melodrama ensues.

Cooper's version of the film strays from its predecessors in terms of its specific plot and characters, but he made sure to include subtle Easter eggs, such as Ally humming "Somewhere Over the Rainbow" as an homage to Garland. The newly minted director says he has always admired the deeply personal yet epic nature of Hal Ashby's work, and the framework of A Star Is Born allowed him to create a similar kind of world that he long dreamed of creating.

"I've always thought in those cinematic terms, just because I loved film so much growing up," Cooper says. "Cinema was the place where I felt I could excavate and find those personal things inside of me that I wanted to share with people, because movies for me were very healing -- and are healing, to this day."

A Star Is Born stewed in development hell for so long that years ago, the plan was for Clint Eastwood to direct Beyonce in the titular role. The singer exited the project in late 2012 due to scheduling problems, and the project sat on the Warner Bros. back burner until early 2015, when news broke after Eastwood and Cooper worked together on American Sniper that the latter would be handed the directing reins.

Cooper puts a lot of stock into his dreams, a few of which he mentions this morning. He recalls one from the night he and Eastwood watched Annie Lennox perform a cover of "I Put a Spell on You" so passionate that it inspired him to re-up the idea of remaking A Star Is Born, which Eastwood no longer wished to direct.

"I woke up and called Greg Silverman, who at the time was the head of Warner Bros., and I said, 'Can I pitch you this crazy idea before it leaves my brain?' " Cooper says casually, as movie stars of his stature do. "I came in and was jumping around the room, talking about different things with the camera, and he said, 'OK, go write it.' And that was it!"

Warner Bros. confirmed Gaga's involvement in August 2016, but not before requesting a screen test so they could share Cooper's confidence in her ability to take on such a hefty role. Though Cooper says he avoids most articles related to his work, he happened upon a recent Los Angeles Times profile of Gaga that begins with a story of Cooper greeting her at the test with a makeup wipe in hand: "Completely open," he reportedly said. "No artifice."

At the Jefferson, Cooper laughs for a bit about how the story makes him seem like a "crazy person" who attacks people with makeup remover. The context, he says, is that they needed to shoot a 10-page scene he wrote that begins with Ally waking up in the morning. He grabbed a wipe from Gaga's makeup artist and asked if he could take the singer's makeup off because Ally, as he explains in a detailed spiel, wouldn't have gone to bed with it on.

"And that was the story," he says. "Does that make sense? Not so creepy?"

No, not so creepy.

Cooper says the stills of a makeup-free Gaga would clear things up even more, returning again to his phone's photo library. The chemistry between the two is undeniable, and they seem to publicly praise each other every chance they get. Today, he likens her to a soul mate.

Cooper says his esophagus hurt for the first few months of doing Jackson's deep voice, which is intended to serve as "the base note" to complement Ally's "popping up and down in the soprano." It is quite startling to hear the gravelly twang coming from a clean-shaven guy in a Philadelphia Eagles hat, as opposed to a bearded country-rock star dressed in neutral tones.

While training for the movie's live performances, Cooper also worked with dialect coach Tim Monich to choose someone after whom to model Jackson's hybrid accent. Cooper settled on Sam Elliott, the Sacramento, Calif.-born actor with Southern heritage, known as much for his drawl as for his thick mustache.

Inspired by Bruce Springsteen remarking in his autobiography that he "took his father's voice," Cooper rewrote his script to include a similarly tense story line between Jackson and his brother turned manager, Bobby, whom Elliott would hopefully play. Cooper then asked Elliott to come over, and played him an audiotape of himself imitating an interview Elliott did at Sundance two years before.

"I didn't know if he was going to think I was an idiot or be mad at me or run out the door because I was a crazy sycophant," Cooper says. "I pitched him the whole story line. He said yes, thank God."

Regardless of his modesty, Cooper is the kind of person with enough clout to randomly call people up and offer them a role in a big studio picture. He is also the kind of person who nonchalantly rattles off the names of famous musicians whom he knows personally, and who inspired Jackson as a character: Bono, Lenny Kravitz, Lars Ulrich, Eddie Vedder and even Noel Gallagher, who Cooper hopes will watch his performance in the movie and "not, like, laugh at me."

'DID RIGHT BY IT'

But even more than any of the idiosyncratic musicians, Cooper wants those who have struggled with addiction to watch the movie and believe that he "did right by it." The actor himself has been sober for years, having dealt with similar problems in the past, and says the movie "couldn't be anything but brutally honest."

A concern to get things right for himself and depicted communities takes over "all of my brain and soul," Cooper says. The positive reactions, which he felt were stronger in Toronto than in Venice, were just an added bonus.

"I said this to Stefani -- I've never had a reception like that," he says. "I've been part of incredible films that people seem to really react to, but there was something about this."

At the mention of her name, Cooper picks up his phone and continues his tireless search for the audition stills as he discusses how he wouldn't have been able to make such a personal film if he didn't have an on-screen partner willing to be as open as she was. He felt vulnerable in Venice, showing his "feelings and contemplations and ideas" to the world.

"And then there was a blackout for 20 minutes in the middle of the movie," he says, laughing. "Which I actually loved, the blackout part... . Life on life's terms."

The conversation draws to a close, and Cooper promises to text the photographs whenever he finds them. Ten minutes later, he does. There is Lady Gaga, lying in bed with the sun shining behind her in one, gently reaching over to turn off the alarm clock in another. The black-and-white images are gorgeous and remarkably peaceful.

They are worth the wait.

Print Headline: Cooper will geek out about Star if you let him