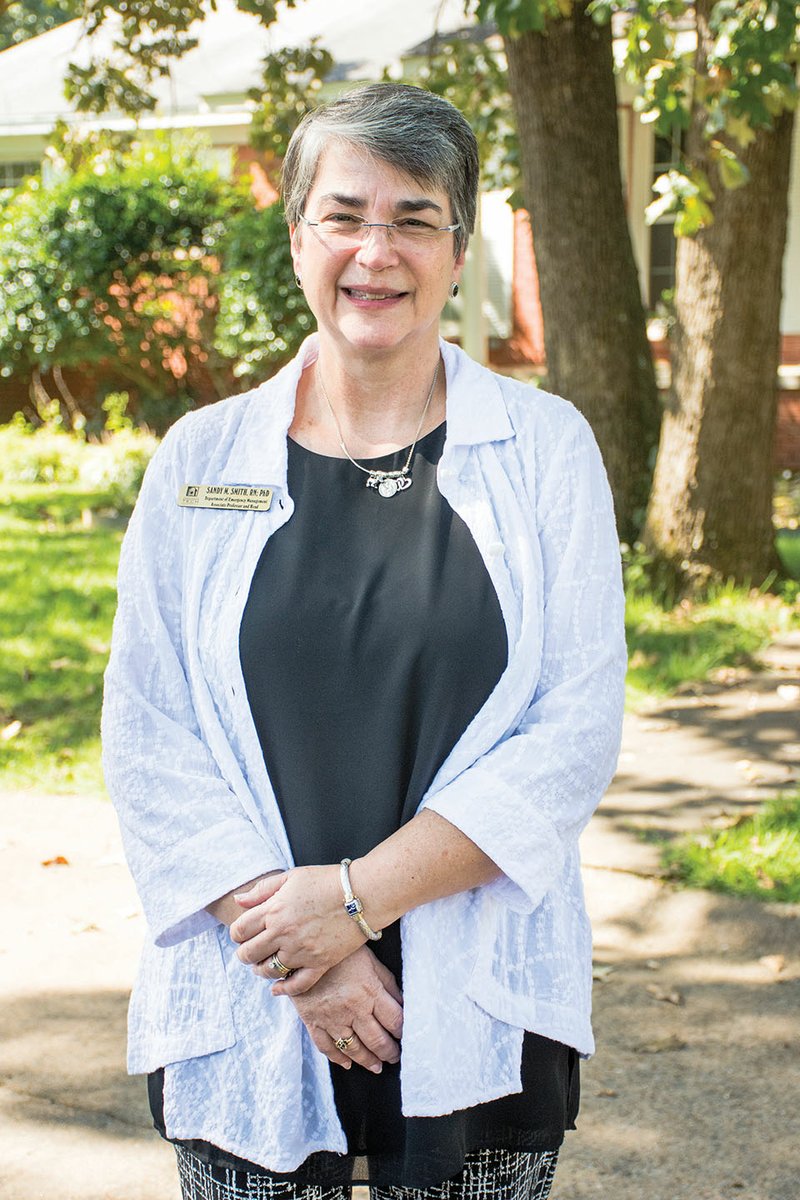 Sandy Smith of Russellville started her career as a registered nurse, and she has taught at Henderson State University, the University of Arkansas at Little Rock and Arkansas Tech University, where she is associate professor and head of the Department of Emergency Management — and in September, she was appointed interim associate dean for the Graduate School.

Sandy Smith, head of the Department of Emergency Management at Arkansas Tech University in Russellville, said it was a natural disaster that sparked her interest in preparedness.

In 2008, her family lived in Little Rock when a tornado hit the area. She had successfully herded everyone downstairs into the safe room, and the electricity had gone off when they heard the tornado passing over their home.

“We had a transformer out, limbs down across our gate, roof damage … just minor stuff,” she said. Homes a few blocks away were uninhabitable.

She said it sparked her passion for being prepared.

Smith said she had a few supplies, but not enough if they were trapped for any length of time.

“That was a touchstone for me,” Smith said. “There were things I thought of, that I went, ‘We’ve got to think this through. It’s great to have this pillow to protect you, but what about our documents? … How do we take care of ourselves for 72 hours?”

Her advice is to assemble a to-go kit with food and other items and to put important documents on a flash drive.

Smith, who started her career as a registered nurse, has been at the helm of the emergency management department since only 2012. She is well-acquainted with its history, however.

“We’re celebrating the 20th anniversary of the first graduates on Oct. 16,” she said.

The sixth annual James Lee Witt Emergency Management and Homeland Security Conference is set to begin at 8:30 a.m. that day on campus in the Chambers Cafeteria west dining room. Registration is available online at atu.edu/emhs or at 8 a.m. the day of the conference.

Witt is a former Yell County judge and, most notably, was appointed by then-President Bill Clinton as director of the Federal Emergency Management Agency.

“Other than James Lee Witt, and Mary Ann Rollans and Kay Goss, who began the [emergency management] program, all the speakers are graduates of the program,” she said.

One of those is Jason Jackson, senior director of emergency management for Walmart.

Smith, who grew up in North Carolina, the second of four girls, said she was influenced to do good works by her father, a real estate agent and county commissioner, and her mother, “a supreme volunteer.”

“She would take us to do volunteer stuff,” Smith said.

Smith attended Duke University and earned a degree in nursing.

“I loved helping people. I felt very called into nursing, and I gravitated toward community health. … I really loved working with people in their own homes,” Smith said.

She married Roy, a Duke Divinity School graduate and United Methodist minister, and the couple moved to Pansy, then to Pine Bluff in summer 1982, and she worked at Bradley County Memorial Hospital in Warren. Then she took a position at Jenkins Memorial Center in Pine Bluff, a program for developmentally disabled children.

“I had a fabulous experience,” Smith said.

She and her husband adopted their son, Andrew, now 32, and 3 1/2 years later, their daughter, Martha, now 29, both as infants from the Gladney Center for Adoption in Texas. Smith stayed home until Martha started to kindergarten in Prescott.

“I was enticed into being an adjunct clinical instructor at [Henderson State University in Arkadelphia],” Smith said. “I had been approached by a nurse in our church who had a master’s who said, ‘Have you ever thought about teaching nursing?’”

Smith hadn’t, but she liked the idea. She started her master’s-degree journey at the University of Central Arkansas in Conway.

Roy was appointed to Malvern First United Methodist Church, and the family moved to the community in 1995 and stayed 10 years.

Then they moved to Little Rock, and Smith worked for the Arkansas Department of Higher Education for 18 months, beginning in 2006, which was also the year she earned her doctorate in nursing. She was over the Arkansas Course Transfer System, known as ACTS.

“I loved it,” Smith said. “There were just a lot of projects, but nothing where I could say I was making a specific difference for college students. I said, ‘I’m going to go back to teaching.’”

She taught community health and psychiatric nursing at the University of Arkansas at Little Rock, and from there, she went into hospice nursing.

The couple moved to Russellville in 2010, and now they also have a home in Little Rock because Roy is pastor at Trinity United Methodist Church there.

Arkansas Tech didn’t have an open position in the nursing program when they moved to Russellville, and she was doing consulting work for the University of Arkansas for Medical Sciences in Little Rock.

Smith agreed to be the speaker for a United Methodist Women meeting one day, and it changed everything.

“It was fortuitous because from that, one of the people who heard me speak said, ‘I can tell you’re a teacher. Have you ever thought about teaching emergency management?’”

She hadn’t. That man was Ed Leachman, who was interim head of the department. Smith went to discuss the possibilities.

“I said, ‘Oh, my gosh, it is so similar to community health; it’s all about preparedness,’” Smith said.

She was offered a visiting-assistant-professor position in both nursing and emergency management.

In January 2012, she became head of the Department of Emergency Management — and, on Sept. 6, she was tapped to be the interim associate dean of the Graduate College. Her teaching is on hold for now because there are just so many hours in a day.

“My head is spinning,” Smith said, laughing. “There’s always something to be done.”

Smith said she has had many mentors, and Mary Gunter, chief of staff at Arkansas Tech, is one of those.

“As the former graduate dean, I had the privilege of working with Dr. Smith as she assumed the leadership role in emergency management,” Gunter said. “She was a member of the Graduate Council, where I saw firsthand her visionary leadership and diligence in working toward serving students at both the graduate and undergraduate levels. … She brings wisdom, enthusiasm and high expectations in her work.”

Smith said her goal for the Department of Emergency Management is “to continue to be the leader in emergency management education — that’s No. 1.”

An experience that happened when she was about 5 years old made a lasting impact on Smith: Her family’s next-door neighbor had a house fire.

“My parents woke us up and said, ‘Follow me, you’ve got to get out of the house,’” Smith said.

They went to the safety of another neighbor’s house while her father fought the fire with a garden hose.

“The daddy [who lived in the house] went back to get his children, but he was overcome,” she said. The man died, but someone had already rescued his children.

After that, “I always made certain to have a pair of shoes by the bed that were easy to slip on,” Smith said.

She’s not paranoid; she’s just prepared. She practices what she preaches — and she prays that people listen.