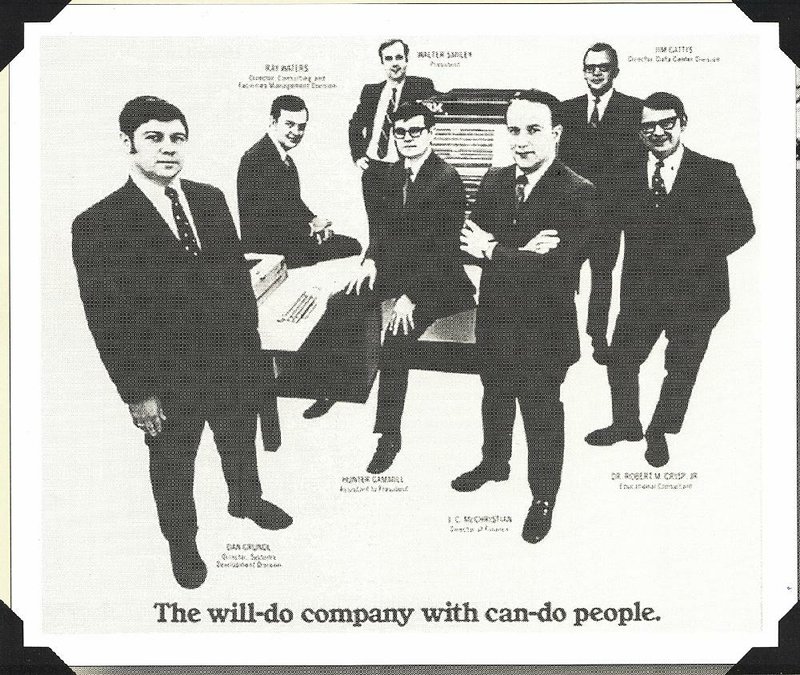 As a vice president with First National Bank of Fayetteville in the late 1960s, Walter Smiley kept running into the same problem.

Smiley had worked for IBM and came to the bank to install a computer system.

At the time, the bank and other similar banks in Arkansas had access to computers, but usable banking software didn't exist.

"As I worked through it, I began to find colleagues all over the state who were having the same problem I was," Smiley said. "We had scraps [of software] put together from here and there, but it was horrible."

He and several of his colleagues decided to start a company, the 80-year-old Smiley said last week from the west Little Rock office of Smiley Technologies -- also a bank software company -- which his children started.

Seeking funding, Smiley and his colleagues went to the presidents of banks where they worked, but the bankers were spooked, Smiley said.

"Bankers are not risk-takers," Smiley said. "You can't be a risk-taker if you make loans."

After that, Systematics started building software on Oct. 1, 1968.

Meanwhile, the reason Stephens Inc. invested in Systematics, Jacoby said, was that he and Jack Stephens had decided to invest in computer service companies. They wanted at least one in Arkansas to take advantage of a computer system Stephens Inc. had at Union Life Insurance Co.

"That was the basis of Systematics," Jacoby said. "When Jack Stephens said, 'Let's go ahead and start the company,' I said, 'Before we start, let me find somebody to run it.'"

Jacoby talked with several people and was told he should talk to Walter Smiley.

"I came up with the name Systematics and Walter did everything else," Jacoby said.

Systematics' first customer was First National Bank in Fayetteville, which later was sold to what is now Bank of America.

Its second customer was First Arkansas Bank & Trust of Jacksonville, which is still with the company 50 years later, Smiley said.

FIS Global, the successor of Systematics, will celebrate the 50th anniversary of the business on Thursday at FIS' west Little Rock offices.

Gary Norcross, FIS' chief executive officer and a native Arkansan, will be there as well as local dignitaries, and other FIS executives, current and past employees. The highlight of the celebration will be the unearthing of a time capsule buried 25 years ago in 1993.

The celebration will continue for the entire month of October, said Norcross, who began his career 30 years ago with Systematics as an entry level programmer.

The company is honoring 50 FIS executives over the month and will ring the opening bell on the New York Stock Exchange on Tuesday, Norcross said. And it will open the time capsule in Little Rock.

"The bottom line is we're doing celebrations around the world," Norcross said. "It'll be a fun celebration."

FIS has a presence in more than 100 countries with more than 53,000 employees and annual revenue of almost $9 billion. About 1,300 FIS employees are in Little Rock.

Most of the first six or seven people with Systematics were in sales but were really more the systems engineer types, Smiley said.

"We were more 'how do you make these things run,' not just 'how do you sell them,'" Smiley said. "That's how we all got together; we were all fairly technical."

Basically, that first group of employees was just a bunch of guys who knew each other, Smiley said.

"We didn't have a business plan," he said. "We didn't know anything about what we were doing. We just knew there was no software."

Every IBM office had a line down the middle, Smiley said, dividing the systems engineers and the salesmen.

"The systems engineers were the people who knew how to make computers run," Smiley said. "And the salesmen sold them."

An early Systematics newspaper advertisement showed seven company executives in dark suits standing beside an IBM 360 model 30, a giant state-of-the art IBM computer with -- believe it or not -- only 64k of memory.

In the ad, Smiley stood in the back beside the front of the computer, where all the lights are. The computer was almost as tall as Smiley's shoulders.

"You had to be real careful about how you wrote programs -- or you'd use all the memory up quickly," Smiley said.

Systematics went public in 1981 with about 1,500 employees, which dropped Stephens' ownership to about 60 percent.

Bank presidents in Arkansas trusted Systematics because of the Stephens backing. But in many places outside Arkansas, that didn't work.

"It was clearly the right thing to do," Smiley said. "We went public primarily for that reason and it changed our world. Suddenly, once we had gone public, we were viable in places that wouldn't have talked to us before."

Systematics built the buildings on its west Little Rock campus within a three or four year window of the company going public.

"Those two things changed the world for us," Smiley said. "The buildings were tangible proof that we were going to be here. I never would have believed the difference those buildings made. And secondly, being public. Because we wound up with a national reputation and we made a lot of money for shareholders."

By the time Systematics sold to Alltel Corp. in 1990 for about $540 million, Systematics had about 3,500 employees, Smiley recalled. By then, Systematics was one of the two or three largest banking data facilities management firms in the country.

Scott Ford, the former chief executive officer of Alltel, called Alltel's purchase of Systematics "a great transaction for everybody."

"The business was an important value driver for our shareholders in and of itself and also a source of innumerable talented individuals that helped Alltel grow across all of our business lines," Ford said.

The transaction itself provided a secure, long-term home for the employees and customers of Alltel Information Services, Ford said.

"It generated growth capital for the expansion of Alltel's wireless business at a critical time and set Fidelity [National] up to become an international leader in the financial services data processing industry," Ford said.

Fidelity then rebranded itself as Fidelity Information Services, Norcross said.

Fidelity went public in 2005 and now is known as FIS, which is its ticker symbol, Norcross said.

Smiley said he is most proud that Systematics produced employees who still want to have reunions.

"Three or four years ago, we had a reunion of just the original Systematics employees," Smiley said. "And I think something like 250 people showed up. When you run into one of them on the street, they will say, 'That's the best place I ever worked.' And I think they mean it. It was a unique place."