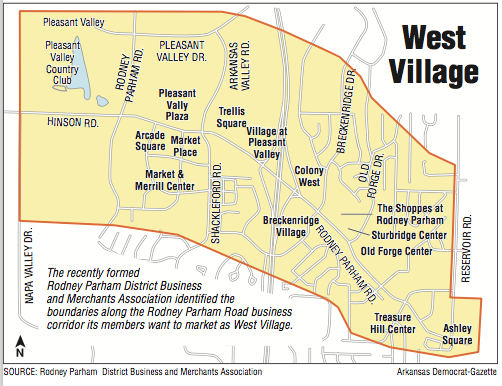 The best days of the Kmart on North Rodney Parham Road in west Little Rock were long past when it closed last year.

Even Chris Moses, president and chief executive officer of Newmark Moses Tucker Partners, minced no words in describing the vacant discount store that opened to great fanfare 43 years ago as a "blighted" site.

Across the busy thoroughfare, the Whole Foods in the Village at Pleasant Valley shopping center has been gone three years.

Altogether, the two vacant buildings amounted to 150,000 square feet of empty retail space that seemed to epitomize how the once bustling retail corridor along Rodney Parham Road had fallen on hard times.

Even before Moses' company announced on Sept. 27 that a group of physicians had purchased the Kmart site at 10901 Rodney Parham Road for $12 million with the intention to spend another $23 million to redevelop it into a medical complex, a vibrancy to the corridor seemed to be returning.

Grub's Bar & Grill, a popular eatery on Fayetteville's Dickson Street, quickly snapped up the old Chili's restaurant space as its first foray into the Little Rock market. It is expected to open early next year.

Another empty storefront in the Village at Pleasant Valley, once occupied by a Dixie Cafe, will be the new home for the Mehfil Indo-Pak Cuisine restaurant, backed by the same partners that started Tour of India in Conway and a restaurant in Houston. It is scheduled to open in November.

Even before that, there were signs that the retail corridor was going through a transition rather than hard times.

But the vacant Kmart stuck out.

Deborah Sefcik, an executive with Iberia Bank, said the empty building prodded discussion about what could be done to improve the corridor between Reservoir Road on the east and Hinson Road on the west.

"We needed to form some type of group to get together," she recalled.

At the same time, others approached the Little Rock Regional Chamber of Commerce to discuss the subject.

Soon, the groups met. The result: Formation of the Rodney Parham District Business and Merchants Association. Sefcik is its board president.

The name of the organization is a mouthful and board discussions soon turned to another name for the area. The board settled on West Village, a nod to the East Village development across town on the other side of Interstate 30.

Board members believe the West Village complements, not competes with, East Village and other entertainment and retail districts.

"Naming is very much about our brand identification," said Jim Alley, the board's vice president and owner of Guillermo's Coffee, Tea and Roastery in the Village at Pleasant Valley. "If you take a look around Little Rock, we have a multitude of great neighborhood merchant associations: Hillcrest, Heights, SOMA, Argenta, East Village.

"East Village is a great name for exactly where they're located. Why not continue the momentum of great associations and name it West Village?"

The association claims no credit for Premier Gastroenterology Associates' decision to redevelop Kmart into the Premier Medical Plaza, which is expected to be completed next summer. Rather, it believes the redevelopment recognizes that the area is a vibrant place.

"It's great for numerous reasons just in what this area still holds in value for wanting to bring in something like that and wanting to be part of our community," said Drew Laning, an executive with Flake and Kelley Commercial Real Estate who heads the board's finance committee. "It helps everything. It helps the shops, it helps the restaurants. It's going to help the neighborhoods."

Jake Keet, one of the Petit and Keet owners, said the physicians group provides the corridor the beginning of a good mix of professional services to complement the retail and dining offerings.

"The hope is that with the businesses that do come here, you can make this a true professional corridor," he said. "We need more professionals moving into the area, into the residential areas as well, to really spark growth out."

The Village at Pleasant Valley might be a microcosm for what can happen in the corridor. In addition to the Grub's and Mehfil restaurants, there are signs that something is in the offing for the vacant Whole Foods building. Flake and Kelley recently sought and won a variance from city ordinances to allow the building to be expanded.

Hank Kelley, a principal in the real estate firm, recently became majority owner of the Village at Pleasant Valley. John Ramsey, the owner of The Crown Shop, which is at the shopping center, still has a stake.

"I can tell you it would be a ... welcome addition to the property and the neighborhood," Kelley said.

The changing landscape of the shopping center reflects the need to meet the expectations of the changing demographics, Alley said.

Alley said the association has 175 members but expects more after a membership drive kicked off last week. A merchants' launch party is scheduled for Nov. 7 at the Pleasant Valley Country Club. He and other board members anticipate holding at least two events annually designed for the public.

He and other board members say the corridor's momentum is building.

"The energy is starting to turn around in this area," Keet said. "You're starting to see an uptick in activity because people like what's happening. It's not for no reason."