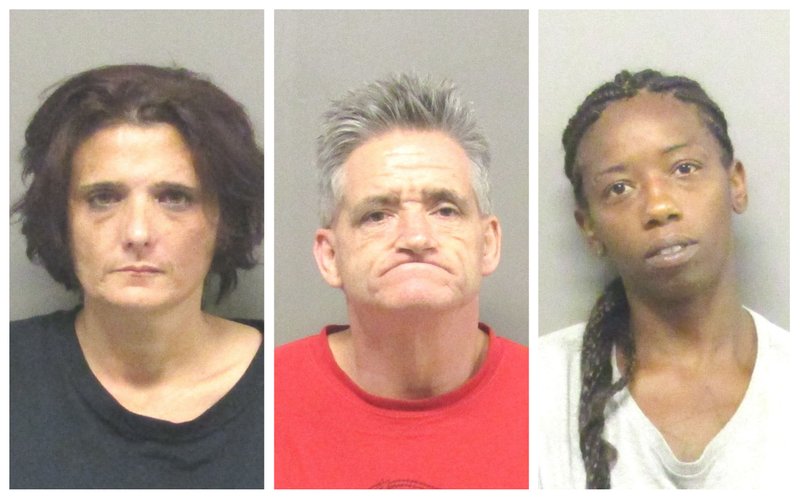 Authorities said an apparently accidental 911 call led to the arrest of three Arkansans late Sunday after drugs were found in their vehicle.

According to a probable cause affidavit, a Hot Springs police dispatcher received a 911 call from a phone number belonging to 54-year-old Robert Thomas Dark around 10 p.m. The dispatcher noted the call was still ongoing and she could hear a man talking about stealing items from various stores and apparently making a deal to purchase meth.

The call was traced to the area of Grand and Central avenues, police said. Court documents show Sgt. John Tinney located a blue Chevrolet Spark at Exxon, 1200 Central Ave., with 43-year-old Wendi Yvonne Barfield in the driver's seat, Dark in the front and 28-year-old Oceaonna Nikita Robinson in the back seat.

Tinney noted that when he arrived Dark opened the passenger door and leaned over "as if placing something under the vehicle." Authorities said that when they searched the underside of the car, officers found a cloth bag containing three used syringes.

In the center of the floorboard, officers found a plastic bag with what later tested positive for meth enclosed in a gum wrapper, according to the affidavit. Another baggie of meth was found in the center console, police said.

All three Hot Springs residents were taken into custody shortly before 10:30 p.m. and each charged with possession of a controlled substance, meth, and possession of drug paraphernalia.

Dark, who is on parole, was also charged with three additional counts of possession of drug paraphernalia, and Robinson had warrants for two counts of failure to appear and one count of failure to comply, authorities said.

Records show all three remained at the Garland County jail Tuesday afternoon: Barfield in lieu of $7,500 bond; Dark in lieu of $12,500 bond; and Robinson in lieu of $8,000 bond.