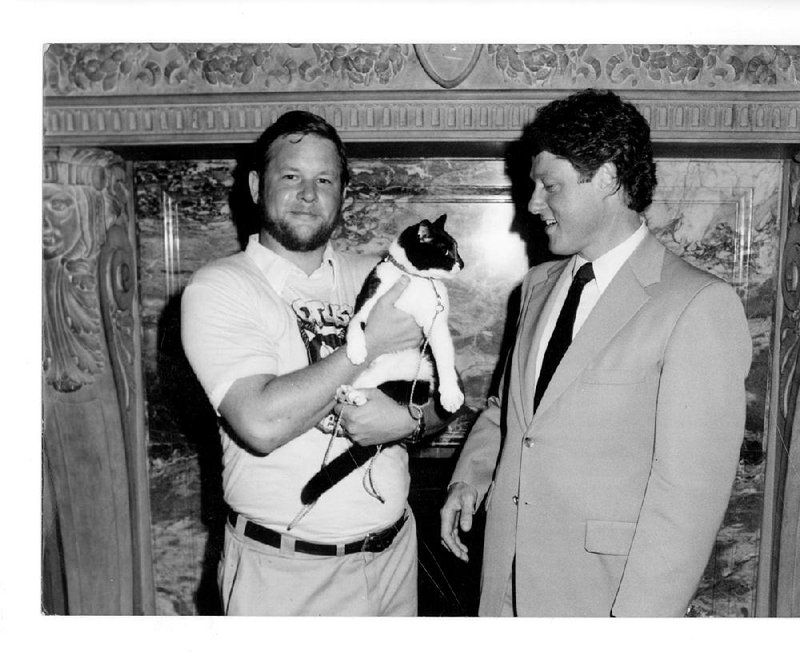 Michael Storey and Otus the Head Cat meet then-Gov. Bill Clinton at the state Capitol in 1984.

Storey was taking a nap in an old armchair and died in his sleep, said Celia Storey, his wife.

She suspects he died of heart disease. He had quintuple bypass surgery in 1998 and had a seizure after dinner on Sept. 30.

Michael Storey, 69, was an associate editor and columnist for the newspaper.

He grew up in Little Rock and earned a bachelor's degree in English literature in 1970 from what is now Rhodes College in Memphis. He was a photographer for the U.S. Air Force from 1970 to 1974.

Storey remained at the newspaper for over 40 years, until his death.

He held several different positions at the paper, including copy editor, graphic designer and television columnist.

But he may have been most famous for writing a weekly satire column under the guise of a cat named Otus.

Otus the Head Cat first appeared in the Arkansas Democrat on Feb. 25, 1979.

Celia Storey said John Robert Starr, who was the Arkansas Democrat's managing editor, asked what he could do to make Michael happy, and she said to let him write about his cat.

Her name was Celia Loyall at the time, and she said she was "stalking" Michael Storey. She toilet-papered his house. She stole his ceramic cat and shot photos of it in various places.

"Obviously, everybody knew I liked Michael and was always messing with him," she said. 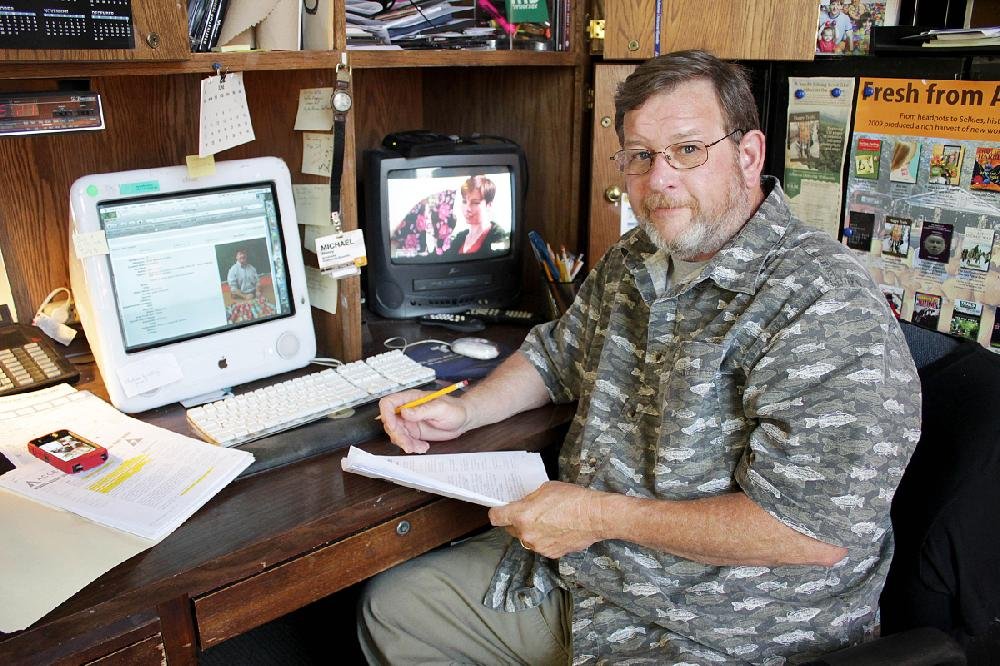 They were married in 1981, and they have a son named Ben Boisvert-Storey, who is now 36 with a family of his own. It was Michael Storey's second marriage.

Lyndon Finney, former assistant managing editor at the Arkansas Democrat, said it was "a pretty giant leap for a newspaper to allow a column written by a fictitious cat."

The column purred along.

Otus was a talker and complainer, wrote Storey.

"I like to think I was only taking his dictation," he wrote.

Otus continued to write his column after his death. A halo appeared above his mugshot.

Frank Fellone, former deputy editor at the Democrat-Gazette, used to field calls from readers, many of whom didn't realize the cat column was satire.

At some point, a tagline was added at the end of the column saying: "Disclaimer: Fayetteville-born Otus the Head Cat's award-winning column of humorous fabrication appears every Saturday."

But some people apparently didn't read that far.

Fellone said some readers were concerned when Otus wrote that there were piranha in Felsenthal National Wildlife Refuge in south Arkansas.

"The water was churning like crazy and in a matter of minutes there was nothing left but a bag of bones and a 12-point trophy rack. My friend Wallace took it home and mounted it in his den," wrote Otus, quoting one of the hunters.

But the Interstate 30 bridge in Little Rock would have to be closed for two months "to be raised six feet to allow the ship to be carefully maneuvered into place," wrote Otus.

"On Monday, after that column ran, I got a call from the Arkansas Hospitality Association telling me they liked most of what I had done, but they were going to have to oppose me on the aircraft carrier," Hays wrote in an email to Storey. "Some of their hotel/motel members along I-30 had called worried about having to divert traffic from their businesses for the time it took to renovate the bridge."

Hays said he had to call the association.

"We pointed out to them to please let your membership know that Otus is a deceased cat, a fictional character," Hays said Monday.

"He sure did provide a lot of smiles to us for many years," Hays said of Storey and Otus. "A twinkle in the eyes of the Democrat-Gazette and certainly in the eyes of his readers -- now there will be tear instead of a twinkle."

Fellone said Storey had a cat suit that included a large cat head.

"As a promotion, Michael would wear that cat suit and go places and represent the newspaper," Fellone said.

Hussman said Storey was warm, engaging and had a great sense of humor.

"Satire is something very hard to do in newspapers, but I think he pulled it off," said Hussman. "He had a really creative mind. You have to have a good sense of humor and a creative mind to come up with columns like that."

"The fact that he could go from working in sports to being a graphic artist and then become a TV and satire columnist shows his versatility and creativity," she said.

"He did a great job of informing readers about what they might want to watch," Fellone said. "And he always did it with his tongue in his cheek. I think he was completely serious once, but maybe just that time. I'm just guessing that he was serious one time. He was an optimist as well."

In Saturday's column, Otus' last column before Storey's death, he wrote about the Arkansas Game and Fish Commission's attempt to explain a recent plethora of Bigfoot sightings:

"So many sober, educated, reputable witnesses were seeing a large, hairy, muscular, bipedal ape-like creature slipping in and out of the shadows that AGF finally admitted that there were, indeed, Sasquatch in Arkansas, but that they were probably only 'passing through,'" wrote Otus. "Officials insisted that Arkansas did not have an indigenous population of breeding squatch in the state."