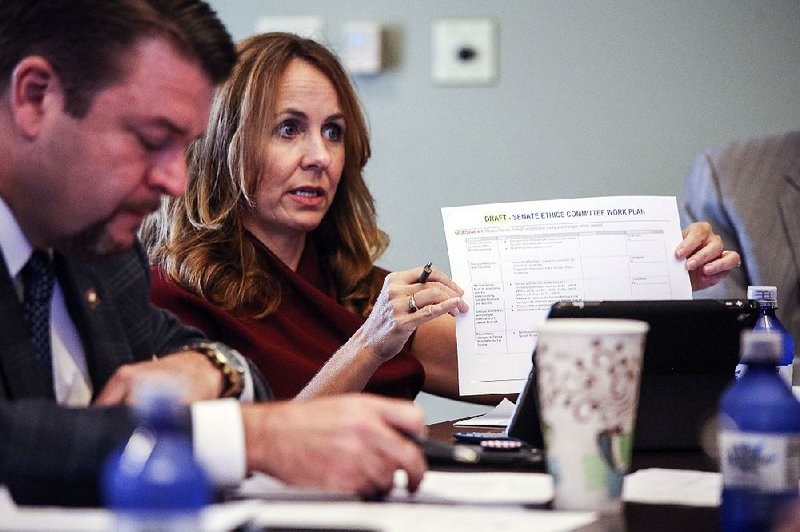 In this file photo the chairman of the Senate Ethics Committee, Sen. Missy Irvin, holds up the draft of the committee’s work plan for others to see during their inaugural meeting at the state Capitol. Next to her is Sen. Jason Rapert.

State senators who are attorneys or consultants would have to disclose lobbyist relationships and give a broad idea of how much they were paid for those relationships under a proposed change to the Senate's ethics rules.

The rule change was recommended Monday by the Senate Ethics Committee, which has been looking at ethics rules in the aftermath of several lawmakers being convicted of or pleading guilty to federal crimes, including a case involving a lobbyist.

"This strikes at the heart of what I think we see as issues and what has been seen as issues over the last several years," Senate President Pro Tempore Jonathan Dismang, R-Searcy, said during a committee meeting.

"If you are willing to be employed by a lobbyist and sit as a member of the Legislature, then it should not offend you to have to disclose that and the amount of money that you made from that lobbyist or the firm that employed the lobbyist," said Dismang, who is an accountant.

Sen. Will Bond, D-Little Rock, who is an attorney, said: "I don't think anybody wants their exact amount they are paying their lawyer or whoever disclosed. I don't think that helps the public to know exactly the amount paid to a [law firm] partner who never served in the Legislature and doesn't currently serve in the Legislature."

"Some of these law firms have represented their clients for 70 to 80 years, unrelated to whether they had a person in the Legislature or not," Bond said. "I understand disclosing those clients and maybe even having a box [to disclose income with ranges]. But if you are going to have them disclose to the penny what they were paid in the prior year for legal service unrelated to governmental affairs, you are knocking out a group of possible people who could serve in the Legislature, and which may be the intent. I get it. That's what I feel like the intent is."

But the committee chairman, Sen. Missy Irvin, R-Mountain View, replied, "Obviously that's not the intent of what is being proposed.

"That is ridiculous, in my opinion, and what we are trying to do is clean up the culture. And there has been one that has been pervasive and unfortunate," she said before the committee recommended the proposed change. The change requires full Senate approval.

Sen. Larry Teague, D-Nashville, who is an insurance agent, said he has a lobbyist, whom he didn't name, who buys insurance from him, "who bought after I got out of office in the House, and has continued to be my customer, and it appears to me that I will need to tell them that I need to disclose it."

At Monday's meeting, Irvin also unveiled draft legislation that would expand income-reporting requirements under the annual Statement of Financial Interest that is filed by elected officials and by other government officials.

The draft legislation would mean that "everybody who is elected to office, whether they are in House or the Senate or school board or county official or anybody, would actually follow the same income disclosurements," instead of the changes only applying to senators through Senate rules, she said. That legislation would require a two-thirds vote of the 100-member House and 35-member Senate because it would amend an initiated act, said Senate chief counsel Steve Cook.

Current state law requires officials to report their sources of gross income in two categories each year on their Statement of Financial Interest: above $1,000 to less than $12,500; and above $12,500.

Irvin's draft legislation would require officials to report their sources of income in three categories: at least $1,000 to less than $12,500; at least $12,500 to less than $50,000; and $50,000 and above. It also would include profit, commission and consulting fees under the definition of income. Officials would be required to disclose the names of businesses in which they have investments or holdings in similar categories.

After the meeting, House Speaker Matthew Shepherd, R-El Dorado, said he wants to review the draft legislation and give it further thought.

"I can certainly understand further transparency, but we need to think about how it is going to be applied beyond legislators" to board and commission members, he said.

In June, the Senate overhauled its rules to create an ethics committee, prohibit senators from certain activities involving conflicts of interest and require disclosure of other conflicts and personal finances.

The Ethics Committee on Monday also recommended Senate approval of a rule change that would bar senators from trying to influence a vote on legislation on which they themselves, because of conflicts of interest, won't discuss or vote on in committee or on the Senate floor.

Another recommended rule change would bar a member of a senator's law firm from representing a claimant before the Arkansas Claims Commission, which hears claims against the state. The rules already bar an attorney in the Senate from representing such a claimant before the Claims Commission. The committee asked Bond and Cook to develop a clause to allow existing relationships to continue.

But Sen. Jason Rapert, R-Conway, said he worried about the possible proliferation of frivolous complaints against senators from groups outside the Senate.

Former Sens. Jon Woods, R-Springdale, and Jake Files, R-Fort Smith, and former Reps. Micah Neal, R-Springdale, Hank Wilkins, D-Pine Bluff, and Eddie Cooper, D-Melbourne, have been convicted of or have pleaded guilty to federal charges as a result of federal investigations during the past two years.

Former Senate Judiciary Committee Chairman Jeremy Hutchinson, R-Little Rock, has been indicted on federal wire fraud and tax charges to which he has pleaded innocent. In addition, state Rep. Mickey Gates, R-Hot Springs, faces state criminal charges accusing him of failing to pay state income taxes or file returns. He has pleaded innocent to the charges.