Discover discada: An outdoor cooker fashioned from a plow disc 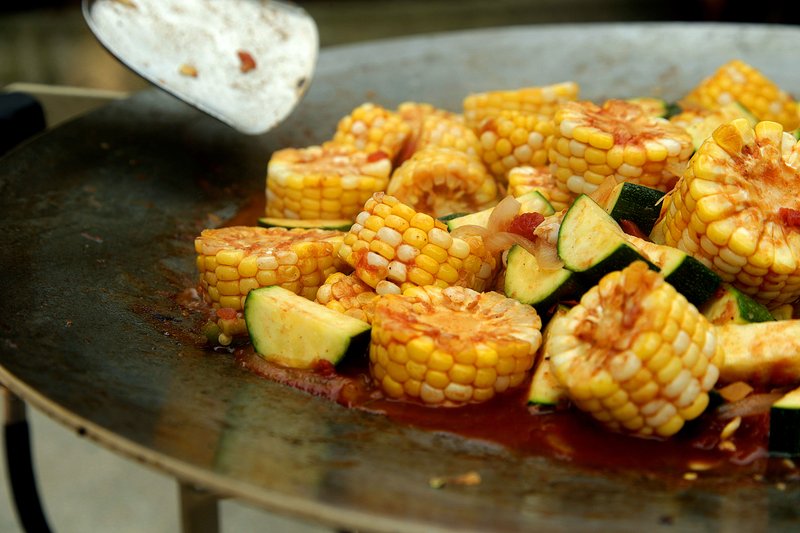 Familiar with any of these names? If not, don't sweat it. Until recently, I was one of many outdoor cooking enthusiasts who had never even heard of the terms. However, if you are familiar, you're one of a small but growing number of passionate cooks who reveres discada cooking, a style found in pockets of the American Southwest but similarly replicated around the world.

The name is one of a number of terms given to cooking outdoors on a converted plow disc — yes, those same discs mounted behind tractors and used to till and prepare the ground for farming; the term also refers to a mixed meat dish traditionally prepared on a plow disc that is popular in northern Mexico. Do an Internet search and you'll turn up chat rooms and online forums, social media pages and dedicated websites, as well as a few commercial producers and custom fabricators.

"I've known about this type of cooking since I was a little kid," Mike Montana says. "I remember my father and much older brother having a 20-inch little disc. It was pitted, a rinky-dink little thing."

Originally from Luling, Texas, Montana now runs a popular discada site on Facebook. Started about five years ago, the site counts more than 1,600 members who share everything from tips to recipes, as well as custom and commercial discada setups.

While he wasn't much of a fan of discada cooking as a kid, Montana came to love it after he entered the professional barbecue circuit. "When you're at competitions, you kind of want to eat something that's not been smoked or put on the grill after awhile. The disc cooker's perfect. It's easy to make breakfast, lunch, dinner, whatever we want, really quick."

While cooking on a plow disc may sound unusual, it's nothing new. Discada cooking in the Southwest dates back more than a century, with much of the lore reaching back to the construction of the railroads in the late 1800s.

"A majority of the railroad workers coming through New Mexico and Texas were Chinese," Montana says. "When they would take their lunches, they'd use a wok. We didn't have the same woks they had, but we had these plows. We filled in the disc holes and turned them into cookers."

While wok cooking may have inspired some discada cooking in the American Southwest, David Hartford, founder of Southwest Disk, a New Mexico-based company that sells the discs, stresses that plow disc cooking is found in many places throughout the world. "They do it all over. In Finland it's a real big thing," Hartford says. "I sell a lot in Uruguay, and it's really big in Argentina and Mexico. Ever since discs have been used to plow fields, it's been there."

Hartford also stresses that a cook shouldn't approach a discada the same way as a wok. "A wok is really thin metal. It's good for flash cooking," he notes. "A disc is a lot thicker. You're looking at almost a quarter-inch thickness." He recommends approaching a discada in the way one would cook using a skillet or frying pan.

As for dishes, it's easy to find recipes for almost anything using a discada. Fajitas, chicharrones and other Southwestern dishes are popular, as are recipes for dishes such as chili and gumbo. But you'll also find methods for crab cakes, popcorn, pizza and pancakes.

"It's great with heat regulation," Hartford says. "I've topped one disc with another and it works just like an oven."

"I cooked at a UT [University of Texas at Austin] tailgate on my giant disc," says custom discada fabricator Luis Buentello. "In one day we did breakfast tacos, fajitas and then deep-fried chicken wings — in minimal oil. Just like that. The people next to us were like, 'I gotta have one of those.'"

One note when cooking: Because of the material and thickness of the disc, I've found it doesn't heat evenly all over. While the center is great for higher-heat cooking, the outer edges of the disc work well to keep cooked foods warm. A lot also depends on the power of the heat source underneath.

Discadas are generally made of pressed carbon-steel plow discs, and typically range from 22 to 24 inches. As with cast-iron cookware, they "season" over time as they are repeatedly heated, absorbing oil and flavor through the metal's "pores." As they are used, the discs take on a darkened patina as layers of seasoning build up.

And like a well-seasoned cast-iron pan, discs are relatively easy to clean: After using, wipe out the disc to remove excess food. The first time I used a new disc, I was amazed at how easy it was to clean, even without a layer of seasoning. If any food happens to stick, add some water and heat until the food comes loose, then scrub and wipe clean.

Look online and you'll also find a variety of discs, from very shallow discs to deeper, more spherical options. You will also find discs with scalloped edges, often called "Roman discs," traditionally used to break through hard-packed ground. "Shallow discs are good for anyone who likes to saute, sear or blacken. They're good for fajitas, and also for tortillas, since the tortillas won't slide down the middle," Buentello says. Deep discs, he notes, are better for deep-frying, or when making a sauce-based dish or gravy. Some discs also come fitted with a raised lip around the edge; the lip helps to contain food, keeping it in the disc as you stir the dish while it cooks.

While discada cooking may still be a niche thing in many parts of this country, it's growing quickly. Hartford, who made his first discada setup while his son was in the Boy Scouts, has been in business for about 20 years, and quickly focused on the online market. "We went from maybe one or two discs a week to, well, now it's 30 or 40 discs a day. And I ship all over the world, as far as Europe and Asia."

Little Rock-based Blue Moon Disk Co., founded in 2009, produces 16-, 18- and 20-inch discs as well as a line of seasoning products and accessories available at select retailers across Arkansas and in Memphis, and online at bluemoondisk.com.

Of course, as with anything involving the outdoors and live fire cooking, there is a passionate market for custom creations.

One warning: Once you've invested in one, you'll probably want more.

I'm still breaking in my first discada and I've already ordered a second.

I can't wait to take it for a spin. 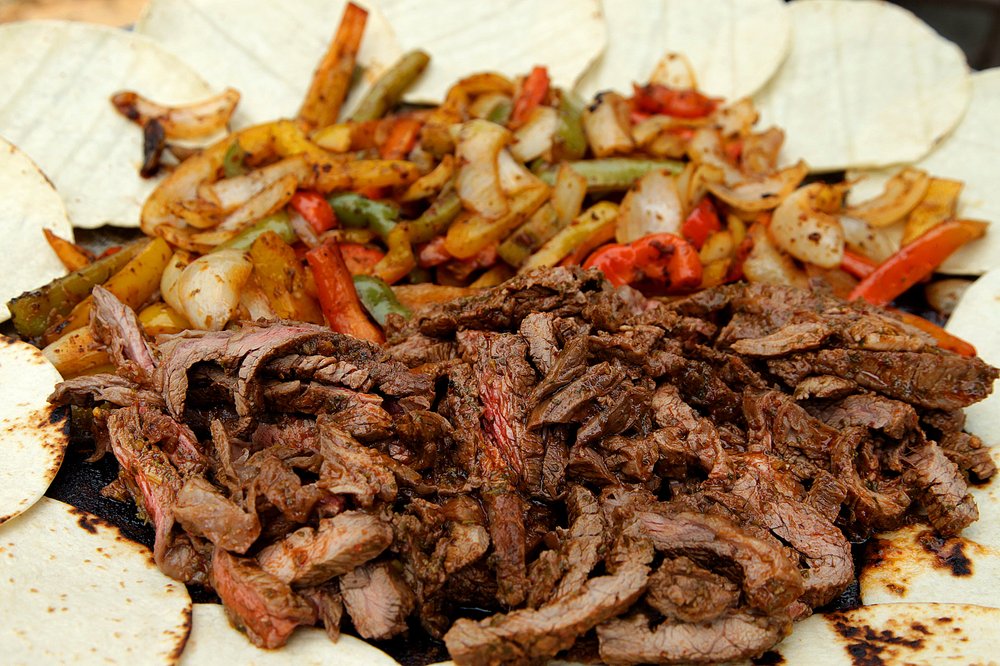 2 to 4 chipotle peppers in adobo sauce, or to taste

Rub the mixture all over the skirt steak, then place in a large resealable plastic bag with any remaining mixture and marinate, refrigerated, for 2 to 4 hours.

Remove the bag from the refrigerator 1 hour before grilling to allow the steak to come to room temperature.

Heat a discada or grill over high heat, and coat with a thin film of oil. Grill the steak until medium-rare, 4 to 6 minutes on each side. (For lower-heat burners, it might be easier to slice the steak prior to grilling to ensure the pieces sear properly, and don't simply simmer in their juices while cooking.) Remove the steak and slice crosswise across the grain into thin strips. Meanwhile, grill the sliced peppers and onions until charred and softened.

Remove the steak and vegetables from the discada. Lightly oil the discada and warm the tortillas on both sides. Serve immediately, along with the steak fajitas, vegetables, cheese and pico de gallo. 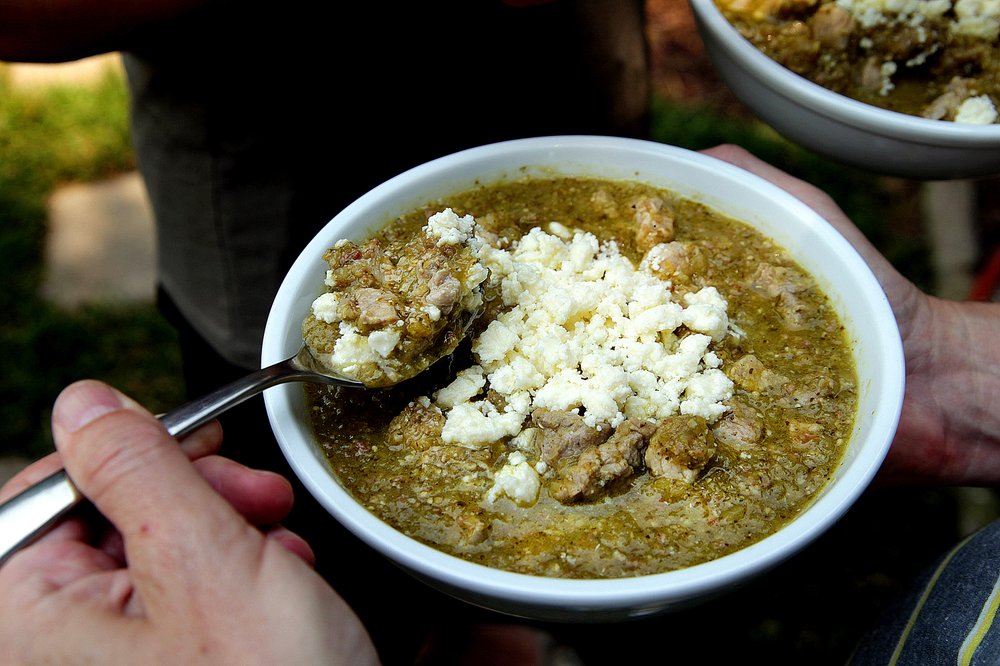 2 to 3 tablespoons lard or canola oil

Roast the chiles: Heat the discada until hot. Roast the chiles until blistered and charred on all sides. Place in a plastic bag until cool enough to handle, then rub off the charred skin (do not wash, or this will remove flavor). Seed and coarsely chop the chiles, then set aside.

Heat the discada over medium-high heat until hot. Add the bacon and cook, stirring frequently, until the fat is rendered and the bacon begins to crisp, 6 to 8 minutes. Stir in the tomatillos, onions and garlic cloves. Cook, stirring frequently, until the vegetables are tender and the tomatillos begin releasing their juices, 8 to 10 minutes. Add the beer, scraping up any browned bits from the surface of the discada. Remove from heat.

Puree the vegetables, along with the roasted chiles, cilantro and green onions in a food processor (this will probably need to be done in batches).

Season the tenderloin cubes with the salt and several grinds of pepper.

Heat the discada over medium-high heat until hot. Add the lard and brown the pork on all sides. Add the vegetable pure, along with the chicken broth. Reduce the heat to a gentle simmer and cook, stirring occasionally, until the pork is tender and the chili is thickened, 15 to 30 minutes. Remove from heat and serve.

Heat a discada over medium heat until hot. Add the oil, then the onion, garlic and jalapeno. Cook, stirring frequently, until the onions are translucent, 3 to 5 minutes.

Stir in the tomatoes, zucchini, corn, salt, pepper and cumin, along with 1 cup broth. Cover and cook, stirring occasionally, until the vegetables are tender, about 7 minutes. Add additional broth if needed. Stir in the oregano. Remove from heat; check seasoning.

Place the vegetables on a serving platter, sprinkle with the cheese and serve immediately.