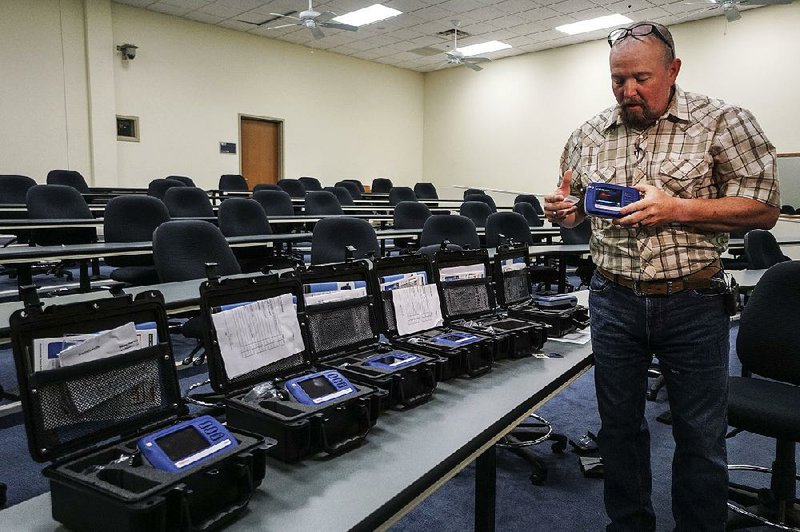 The TruNarc, which uses a laser to scan substances, will allow officers to identify a narcotic within minutes -- enabling officers to make arrests quicker and collect evidence without the danger of being exposed to dangerous drugs, Arkansas Drug Director Kirk Lane said Wednesday after a training demonstration of the technology.

"This will keep officers safe," Lane said. "That's the main thing. Officers don't have to come in contact with the substance."

Lane bought five of the devices -- each costing about $29,000 -- this month to be distributed to agencies across the state. Two devices will go to the Arkansas State Police, one will go to the highway police, one to the postal inspection office and one to the Benton Police Department, he said.

Lane, a former chief of the department, said these agencies were chosen to spread the devices out over local, state and federal agencies. Lane said he hopes to be able to buy up to five more of the devices before the year ends, depending on whether his office receives a grant for which he recently applied.

"I'd love to see a day where every officer carried one, but I don't think we have that much money," Lane said, smiling. "We definitely need more in the state than what we have because of what the officers have to deal with."

In an overdose case, Lane said the TruNarc will allow officers to determine exactly what drug the person used, making it easier to get the correct treatment faster.

The TruNarc is a hand-held device that can detect about 450 drugs through plastic bags, water bottles and even glass, product demonstrator and former Fort Worth police officer Russell Johnson said.

Not having to remove the substance from its container, Lane said, is what makes the technology potentially lifesaving.

Fentanyl, a synthetic opioid used on its own or laced into heroin and other drugs, can be deadly just through contact, Lane said, and Arkansas officers are encountering it more and more.

According to a U.S. Department of Justice briefing guide for first responders, the Drug Enforcement Administration warns that fentanyl is 50 to 100 times stronger than morphine and can be inhaled or absorbed through the skin, eyes or mouth.

This poses a problem for first responders and law enforcement officers, since exposure to even a small amount of the drug can lead to "significant health-related complications, respiratory depression, or death."

In 2016, more than 400 Arkansans died from drug overdoses, according to the federal Centers for Disease Control and Prevention. In the same year, Arkansas ranked second in the number of prescriptions per person, the center reported.

Though prescribed fentanyl can present a danger to officers, Lane said he is primarily focused on the illegal use of the drug.

Lane said that while working in the Benton Police Department, he knew of officers who had to be hospitalized because they were exposed to deadly drugs like fentanyl.

"It was life-threatening enough that they had to seek medical attention," he said.

About 25 officers and prosecuting attorneys filed into a classroom in the Arkansas State Police headquarters Wednesday to learn how to use the TruNarc device, which Lane said will be rolled out as soon as next week.

Johnson, a Fort Worth police officer for about 30 years, began using the TruNarc device in 2013. Aside from its intended purpose, he laughingly said he also liked it because it is "cop-proof."

To demonstrate his point, he held a small bag of mannitol -- a sugar alcohol powder commonly used to dilute pure drugs like heroin -- in front of the small, square device's scanner for a few seconds. The screen turned green, indicating that no narcotics were found in the substance, and a message read: "Mannitol."

"That's it," he said. "What was that? A minute? ... In the past, in whatever we've used in the last 30 years, you lost a sub-sample because you had to test it. This alleviates that."

The technology itself is not new, Johnson said. The laser scanner is used in mass spectrometers in crime laboratories across the nation.

"What's new is that you can hold it in your hand," he said.

The device also creates a digital record of the "fingerprint" of the drug, which can be printed out and easily added to police reports, Johnson said.

"There is no guesswork," Johnson said. "This was a game changer for us."