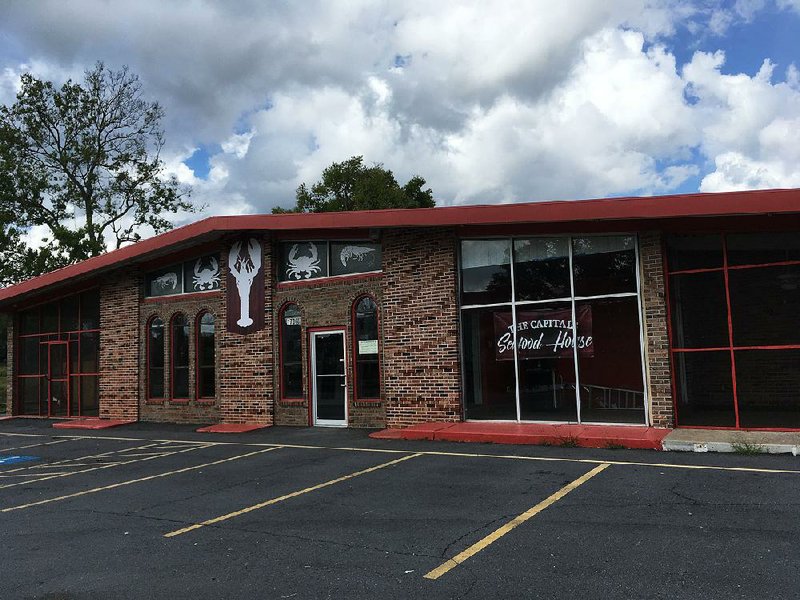 Exterior signs and decorations have appeared on the windows of The Capital’s Seafood House on Little Rock’s West Third Street, near the state Capitol. ( Eric E. Harrison)

Confirming the rumors we'd been hearing that it was to open downtown, we now know the location of the pending Little Rock outlet of the Springfield, Mo.-based Hurts Donut Co. chain: the first floor of the Block 2 Lofts building, 107 E. Markham St., Little Rock, in a space that has been any number of restaurants and/or nightclubs. And, yes, as promised, the new 3,537-square-foot location will be open 24/7. And yes, expect more than 70 varieties of oversized specialty doughnuts, including maple bacon, cotton candy, "fruity pebble" and Andes, in addition to traditional glazed and chocolate. The franchise currently has one other Arkansas location, in Fayetteville. No opening date yet; expect construction to begin soon. Visit wannahurts.com/where-it-hurts.

Meanwhile, the folks that run Donuts & Deli, 308 Main St., Little Rock, next to Bruno's Little Italy, posted this Friday on the establishment's Facebook page (facebook.com/donutslr): "Construction is all done and we are all cleaned up! Just about ready to open!!" Their website, donutslr.com, still under construction, lists a range of gourmet doughnuts (including one called "Nuts for Nutella"), deli sandwiches, salads and daily soup specials, plus tentative hours -- 7 a.m.-4 p.m. Tuesday-Friday, 7 a.m.-2 p.m. Saturday; "Sun & Mon : varies." By deadline, we still were receiving a voicemail message at the listed phone number, (501) 626-8083.

A small sign of progress: Signs and decorations, including a large stylized lobster, two crabs and two shrimp, have sprouted on the exterior of The Capital's Seafood House, 1706 W. Third St., Little Rock, in a former service station catty-cornered from the state Capitol. A peek through the front door over the weekend shows the interior is not only still unfinished, but apparently still devoid of furniture or even kitchen equipment. We've still been unable to get through to the co-owner, former Henderson State/NFL linebacker K.D. Williams, for a status report or a new target opening date. (Williams had originally said he planned to be open in sync with the Sept. 9 start of the NFL season.)

They're putting the grill back into Capitol Smokehouse & Grill, 915 W. Capitol Ave., Little Rock. Starting next week, a new grill will let them put burgers back on the menu. Hours are 11 a.m.-2 p.m. Monday-Friday. The phone number is (501) 372-4227, the website, capitolsmokehouseandgrill.com.

La Hacienda, 3024 Cantrell Road, Little Rock, temporarily shut down again this week, according to a post on its Facebook page (facebook.com/La-Hacienda-Mexican-Restaurant-of-Little-Rock-128006836020): "After a busy year after reopening since our remodel, we have come to some kinks that we think is time to iron out." Reopening date isn't certain; the owners, the family Alvarez, suggest keeping a check on Facebook for status updates. The phone number is (501) 661-0600. You'll recall the restaurant shut down for nearly a year in 2016 for a complete rebuild.

Target date is Nov. 15 for the opening of Mehfil Indo-Pak Cuisine in the former Dixie Cafe in the Village at Pleasant Valley shopping center, Interstate 430 and North Rodney Parham Road. Owner Anita Arab says the menu will focus particularly on Indian and Pakistani dishes from the Mughal era, which ruled that area from the early 1500s to the mid-1700s. "It's different from today's food," she explained to our staff writer Jaime Dunaway. "Normally people don't make it because it takes a long time to prepare and you have to have very authentic recipes." Arab, reportedly part of a partnership that started Tour of India in Conway and a restaurant in Houston, said it will include several barbecue dishes, vegan and vegetarian options, and there will be a regular lunch buffet; live music and other entertainment will also be available during "Arabian Nights" events on the weekends, with extended hours. Renovators are adding a bar and a small banquet room for about 100 people.

Big on Tokyo, in the River Market's Ottenheimer Market Hall, 400 President Clinton Ave., Little Rock, added several preparations of yakisoba noodles to its primarily teriyaki-based menu some time back. Recently they dropped yakisoba and started serving ramen, your choice of tonkatsu (a pork-bone broth) or miso, both $6.99. Hours are 10:30 a.m.-2:30 p.m. Monday-Saturday (though we've seen them close at 2). The phone number is (501) 413-2442.

The Downtown Little Rock Partnership has resumed its Main Street Food Truck Fridays on Capitol Plaza, Main Street and Capitol Avenue, 10:45 a.m.-1:30 p.m., through Oct. 26. Visit facebook.com/downtownlr for details and which trucks will be present on any given Friday.

Another Poke Hula outlet appears poised to open soon in the former Which Wich Superior Sandwiches outlet, on the back side of Lakewood Village, 2607 A McCain Blvd., North Little Rock, joining Little Rock locations at 419 E. Third St. (the original) and 5621 Kavanaugh Blvd. and the one in Conway, 1115 W. Oak St. Hours, according to the sign on the front door: 10 a.m.-9 p.m. Monday-Friday, 11 a.m.-8 p.m. Saturday-Sunday. We have no phone number yet.

We have an updated tentative target reopening date of Oct. 31 for MorningSide Bagels, 10848 Maumelle Blvd., North Little Rock. New owner Robyn Edwards of Maumelle posted a picture of a new piece of equipment on Facebook earlier this week, noting, "Excited to get one of the major pieces of equipment needed for making bagels again! This 70-quart mixer should do the job." And thanked patrons, past and future, for their patience. Edwards, who's getting help setting up from former co-owner Roxane Tackett, says she'll keep the same menu (though she is contemplating adding some specialty sandwiches once things have settled) and she's planning to install a new espresso machine. Hours will be 6 a.m.-1 p.m. Monday-Saturday; she'll assume the shop's former phone number, (501) 753-6960

Down the boulevard in Maumelle proper, expect Milano's Italian Grill to open in a month or so in the former Sawbucks, 1800 Club Manor Drive, Maumelle, says co-owner Tony Demaj. It's from the folks that operate Verona Italian Restaurant, 190 Skyline Drive, Conway, but Demaj says the menu will be somewhat different. Expect seafood and homemade pasta dishes. They're currently hiring, according to the sign out front. Hours will be 11 a.m.-9 p.m. Tuesday-Sunday; there's no phone number yet.

And around the corner, the former Shashimi Japanese Steakhouse, 1900 Club Manor Drive, Maumelle, is on its way to becoming Kendo Japanese Steakhouse & Sushi. No more details than a logo on a Facebook page (facebook.com/kendo.maumelle.3) and a phone number -- (501) 851-4700, which had been Sashimi's number, wasn't answered. From the name, it's probably safe, however, to assume that its offerings will be pretty close to those of Sashimi.

A couple of doors down in the same strip center, also 1900 Club Manor, in the previous location of Hangers Cleaners, progress appears to have resumed on a new Daylight Donuts outlet, "after," notes Neal Moore, who blogs about the town and its business scene, "months of no progress."

Moore also supplies these tidbits from elsewhere in the Maumelle metro area:

The Reis & Irvy's frozen yogurt and ice cream chain has signed a franchise agreement with Doug and Amy Cahill and Tim Howell (a Little Rock native, a lifelong friend of the Cahills and already a Houston-based Reis & Irvy's franchisee), with plans to initially install 12 locations in the Little Rock area, plus a letter of intent for an additional six down the line. Here's the kicker: Reis & Irvy's outlets have no employees. That's right -- they're completely robot-staffed. Signature robot characters -- named, apparently Reis and Irvy -- dispense servings of frozen yogurt, ice cream, gelato and sorbet (provided exclusively by Dannon), with a selection of six possible toppings, in under 60 seconds. Customers use a self-checkout touch screen to order and pay. Get a glimpse of the operation at vimeo.com/285046181; visit the Reis & Irvy's website, reisandirvys.com.

Owner-chef Anthony Valinoti posted on Facebook that, "barring any unforeseen complications," Deluca's Pizza will reopen at 4 p.m. Friday at its new location at 831 Central Ave., Hot Springs, next door to the Core Brewing Co. Public House. The phone number is still (501) 609-9002.

And after innumerable delays, 501 Prime, 215 E. Grand Ave., Hot Springs, is now open. Owner-chef Matt Fuller built it into the gutted shell of a two-story former hardware store just east of Malvern Avenue, and now offers USDA Prime beef; fresh seafood; what Fuller has said is "what I believe to be Arkansas' first true oyster bar," pub-style beers on tap and, according to the Facebook page, facebook.com/501prime, "one of the best bourbon/whiskey selections in the state." Right now it's just open for dinner, 5-10 p.m. Tuesday-Saturday, but it's expected to eventually open for lunch and Saturday-Sunday brunch. The phone number is (501) 623-0202; the website, 501prime.com, is still under construction.