Stores dashing to hire for holidays

In a tight labor market, ’tis the season to be shorthanded by CHRISTOPHER RUGABER AND ANNE D'INNOCENZIO THE ASSOCIATED PRESS | October 11, 2018 at 2:10 a.m. 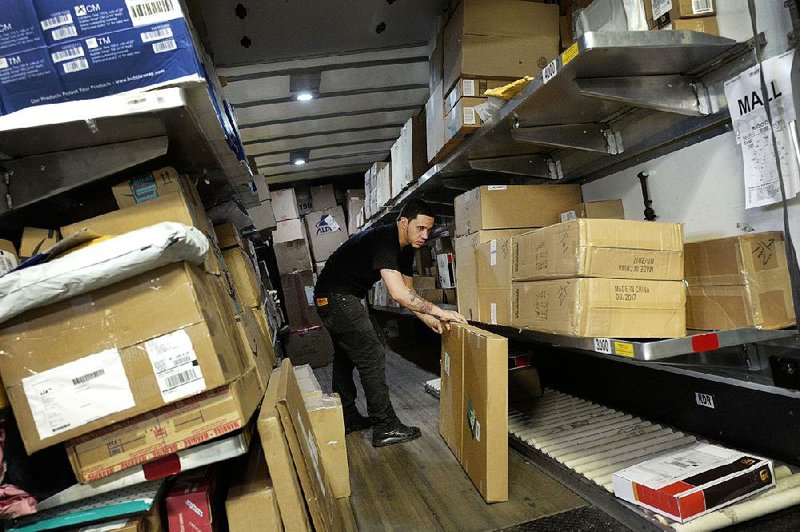 A UPS employee loads packages onto a truck last year at a company facility in New York. This year, UPS is holding its first-ever nationwide job fair as it works to fill seasonal job openings in a tight labor market.

WASHINGTON -- Across the country, America's retailers and shipping companies are looking forward to a robust Christmas shopping season. There's just one concern: Who will stock the shelves, pack the orders and ring up customers?

The U.S. job market is the tightest it's been in five decades, consumer confidence is near an 18-year high and online shopping is surging. Companies that depend on Christmas season sales need more workers at a time when the ranks of the unemployed have dwindled to their lowest level since the recession.

Envisioning an even tougher struggle than they've had in recent years, many companies are taking steps they've not tried before. More of them are offering higher pay. They're holding national hiring days. They're dangling bonuses. They're providing more full-time, rather than part-time, work. Some warehousing companies that fear they still won't be able to fill enough jobs, are turning to automation.

"I can't remember the last time it was this tight," said Tony Lee, a vice president at the Society for Human Resource Management. "You are going to see a real battle for seasonal employees."

At 3.7 percent, the unemployment rate is at a 49-year low, and the government says a record 6.9 million job openings are being advertised -- more than the number of unemployed Americans.

With more job seekers able to choose among employers, many companies have rushed to begin their seasonal hiring earlier than before. Kohl's, a nationwide discount chain with 1,100 stores, tried to get a jump on its rivals by advertising seasonal jobs back in late June.

"We are hiring seasonal associates earlier than ever," said Ryan Festerling, Kohl's head of human resources.

UPS is holding its first-ever nationwide job fair next week. In 170 locations, applicants can have interviews on the spot, and driver candidates can schedule a road test. The Atlanta company had been caught off-guard last year when early holiday shipments swamped its network. On its job-fair day -- which it's dubbing "Brown Friday"-- UPS hopes to hire up to 40,000 of the more than 100,000 seasonal workers it will need.

Sakeria Crawford, who will start a seasonal package-handling job with UPS next month, will earn about $13 an hour -- the most she's ever made. Crawford, 24, who lives in Atlanta, hopes to stay on in a full-time permanent job after the holidays. About one-third of UPS full-time employees began as part-timers. Crawford is using the time before the job starts to line up day care for her son, nearly 4, for whom she hopes the job will also mean a brighter Christmas.

"I'm very, very happy that I even have the opportunity," Crawford said. "I need something stable."

Target wants to hire 120,000 seasonal workers, 20 percent more than last year. The company has raised its starting wage by a dollar to $12 an hour, and is offering a new perk: It will randomly select one hourly worker at each store and distribution center to receive a $500 gift card and make a $500 donation to a community organization of their choice.

Angie Thompson, a Target spokesman, said the higher wage and other inducements appear to be paying off. Applications jumped 20 percent in the first week after they were announced compared with the same period last year.

Yet Amazon beat it to the punch just last week by announcing that it would boost its starting hourly wage to $15 on Nov. 1.

"It's an investment in the future growth of the company and to ensure that we can continue to hire, retain, and develop the best talent for years to come," said Dave Clark, Amazon's senior vice president of worldwide operations.

Amazon, the nation's second-largest private employer after Walmart, says it wants to hire applicants quickly. Its online job ads stress not what is required but what isn't: "No resume. No interview."

Applicants who have informal face-to-face meetings at hiring events and who match Amazon's requirements can be offered jobs on the spot.

With fewer resources, smaller retailers are struggling to keep up with the higher pay and greater perks. It definitely doesn't help if a retailer has to compete with an Amazon location.

Steve Fusek, who owns Fusek's True Value Hardware in Indianapolis, says he had already found it a challenge to find workers who would reliably show up on time. Making matters worse, his store is just 10 miles from an Amazon warehouse. Now, even though Amazon's jobs are more stressful and demanding, he expects to have to raise his starting hourly pay by a dollar or two from $10 to compete with Amazon.

"Whether they want to work there [Amazon] or not, that is the new norm," Fusek said.

Retailers are posting far more full-time jobs compared with last year, and fewer part-time positions, according to research by Indeed, a job-listing website. The proportion of retail jobs that are part time, like sales associates at clothing stores, plummeted this year compared with 2017.

Walmart plans to manage the holiday rush by providing more hours to its part-time workers, a step it implemented just two years ago. Some stores may hire additional seasonal employees, it said.

"There has been a shift because the job market is so strong," said Andrew Flowers, an economist at Indeed. "To find workers, you pretty much have to offer them a full-time job."

Information for this article was contributed by David Koenig and Joseph Pisani of The Associated Press.