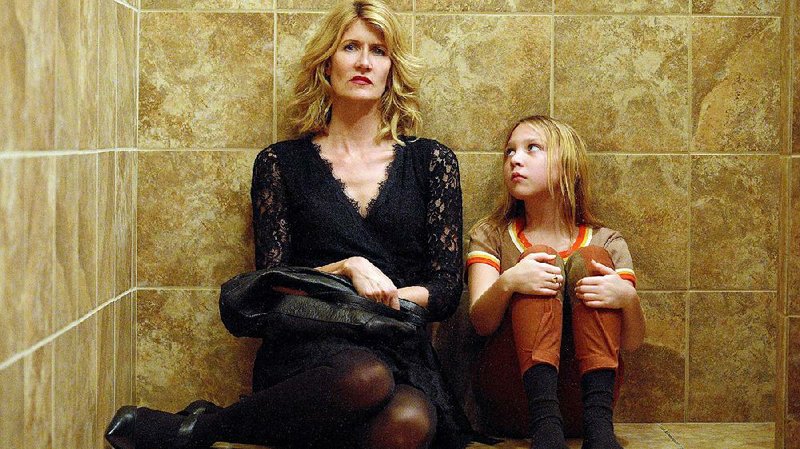 Older and younger Jenny (Laura Dern and Isabelle Nelisse) talk among themselves in Jennifer Fox’s The Tale.

Gripping and disturbing, Jennifer Fox's The Tale is one of the signal films of 2018, a movie that is visceral and stunning and likely to trigger. It was a sensation at Sundance Film Festival where it was acquired by HBO. After premiering on the cable channel in May, it's now available for streaming. But it's the kind of movie that is best seen in mixed company, with a diverse crowd.

Because we probably need to talk to each other about it.

The Arkansas Cinema Society is providing an opportunity today, screening the film at 7 p.m. at Arkansas Repertory Theatre, 601 Main St., Little Rock. Tickets are $15 and include a Q&A session with the film's executive producer, Jayme Lemons, a member of the ACS board of directors, and an after-party. (For more information go to: arkansascinemasociety.org.)

The Tale is basically a story about growing up. It's documentarian Fox's first scripted feature, a cinematic memoir of her 13th summer, when introspective Jenny temporarily escapes her upper-middle-class suburban upbringing with the help of two glamorous mentors, her married horseback riding instructor, the primly British Mrs. G (Elizabeth Debicki) and Mrs. G's lover Bill (Jason Ritter), a running coach who saw potential in Jenny.

The film starts with adult Jenny (Laura Dern) minimizing her horrified mother's (Ellen Burstyn) discovery of a story Jenny wrote after that fateful summer when she spent weekends at Mrs. G's camp. Mom thinks the story is proof that the couple sexually groomed and abused her daughter; Jenny remembers it differently. She had an older lover while she was in her teens, which mightn't have been ideal, but hey, it was the '70s and people weren't so hung up. She keeps insisting to her boyfriend (Common) that she was never a victim.

And, in flashback, we see what Jenny means. As a teenager she was vivacious and confident; in a less enlightened time some of us might have called her a nymphet. In the '70s we didn't worry so much about political correctness.

But then, adult Jenny comes across a photograph of herself at 13. And the hip and swinging actress playing young Jenny is immediately replaced by a prepubescent child (Isabelle Nelisse) desperate for the attention of the adults in the room. She doesn't banter with the older girls the horse camp, she's awed by them.

And so the dynamic is different. Young Jenny might genuinely believe that Mrs. G and Bill are interested in her conversational insights, but the audience (and adult Jenny) understand the ugliness of the couple's icky manipulation of the child. Ritter's performance can genuinely be called brave -- since I've seen him in this film I have a visceral reaction whenever he appears on screen. It takes me a moment to remember he's John Ritter's kid, a familiar actor popping up in another part. He's not what his character does onscreen.

While The Tale is a fictionalized version of Fox's story ("The story you're about to see is true ... as far as I know," adult Jenny informs us), it's not hard to believe a lot of conversations are recounted verbatim. Some things are unforgettable.

And some traumas are processed into anecdotes we tell ourselves about how we came to be ourselves. We like to believe we are the authors of our own stories.

In the #MeToo moment, The Tale feels especially relevant, though it's worth noting the events that took place more than 40 years ago and that Fox has been working on it for the past decade. Some of that research is dramatized in the film. It's suggested that maybe Mrs. G (played in the film's present by Frances Conroy) wasn't quite so free and spirited as Jenny remembers; and that the special bond Bill told Jenny they shared wasn't really so special.

But as awful as these people are, they are still people -- more pathetic than evil. Abusers generally keep abusing, driven as much by their own wounds as moral weakness.

There's not a false performance in the film, and Nelisse, who was 11 during filming, is especially fine, handling what could have been risible scenes in which she engages her adult self with equanimity.