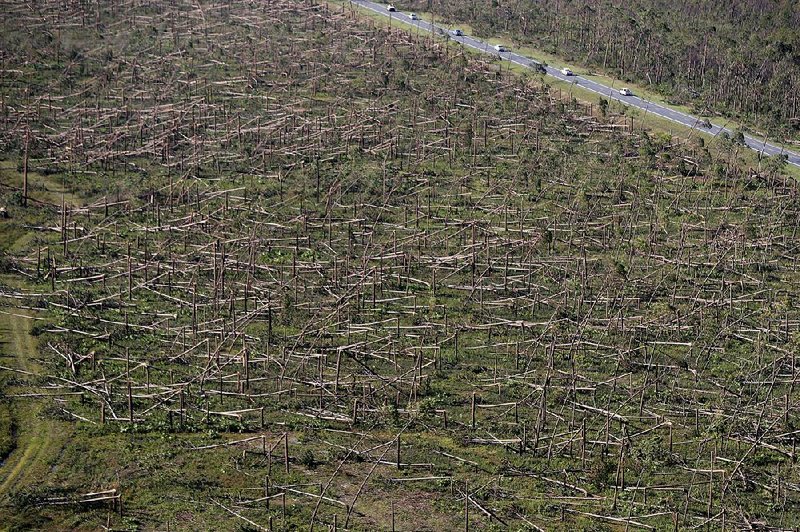 Downed trees by the hundreds cover the ground Friday at Tyndall Air Force Base near Mexico Beach, Fla. Air Force officials have not been able to inspect aircraft left inside hangars that were damaged by Hurricane Michael, including costly F-22 stealth fighters.

TYNDALL AIR FORCE BASE, Fla. -- Tyndall Air Force Base suffered catastrophic damage when Hurricane Michael tore through the Florida panhandle, ripping roofs off airplane hangars, tossing vehicles around a parking lot and leaving a fighter jet that had been on display flipped over on the ground.

The home to the nation's 325th Fighter Wing "took a beating," Col. Brian Laidlaw said in a letter posted Thursday night to the 3,600 men and women stationed at the base located 12 miles east of Panama City. The Air Force evacuated the base in advance of the storm's arrival Wednesday afternoon.

"I will not recall you and your families until we can guarantee your safety. At this time I can't tell you how long that will take, but I'm on it," Laidlaw wrote. "We need to restore basic utilities, clear our roads of trees and power lines, and assess the structural integrity of our buildings. I know that you are eager to return. I ask you to be patient and try to focus on taking care of your families and each other."

The evacuations were ordered Monday and everyone except the "ride-out" team left the base by Tuesday afternoon. Michael was a Category 4 hurricane as it lashed the base, which is between Panama City and Mexico Beach.

On Thursday, Air Force officials conducted the first aerial assessment of the base and found extensive damage. A report posted on the base website said the flight line is devastated and every building on the base suffered severe damage, with many considered a complete loss. In addition, the Tyndall marina, the drone runway and Tyndall Elementary School sustained severe damage.

A number of aircraft were left in the hangars due to safety or maintenance reasons and all of the hangars are damaged, said Ann Stefanek, a spokesman for the Air Force. "We anticipate the aircraft parked inside may be damaged as well, but we won't know the extent until our crews can safely enter those hangars and make an assessment."

The 325th Fighter Wing flies the F-22 stealth fighter, the most expensive fighter jet in the Air Force arsenal, costing about $339 million per aircraft.

"The Air Force remains capable of executing its combat mission across the world with aircraft from other bases, as well as those that were evacuated from Tyndall in advance of the hurricane," Stefanek said.

Florida's two U.S. senators, Democrat Bill Nelson and Republican Marco Rubio, said in a letter Friday to top Air Force officials they want detailed assessments of the money and other support needed to repair the base, restore operations and assist base personnel.

"We are committed to its full recovery and we look forward to working with you to achieve that goal," the letter said.

Meanwhile, Air Force Special Tactics Airmen with the 23rd Special Tactics Squadron have returned to controlling air traffic at Tyndall, according to a news release from the Air Force. They received the first airplane at 7:06 p.m. Thursday. Officials say the opened runway will help allow aircraft with supplies and food to land for distribution in the Florida panhandle.

Laidlaw said power and basic utilities have not been restored to the base.