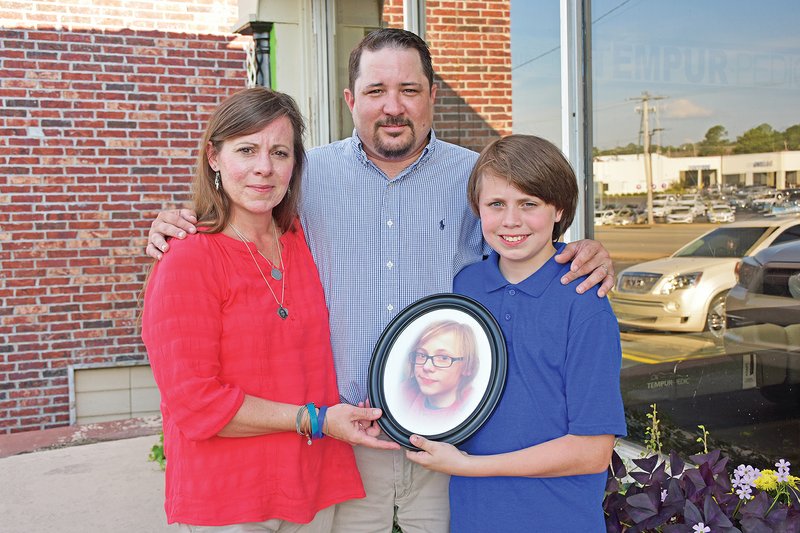 Jennifer and Jeremy James and their son, Jonas, 12, hold a photo of Jesse Dylan James. The couple’s 14-year-old son died by suicide in September 2017, and the couple formed the Jesse Dylan James Foundation. The second Jammin’ for Jesse event is scheduled for 4:30-10 p.m. Saturday at the White County Fairgrounds in Searcy. Bands will perform, and there will be food and activities, including a dunking booth, bounce houses and face-painting. The event is free, but donations will be accepted.

Ninth-grader Jesse Dylan James was quiet and shy like his mother, Jennifer, yet funny and quick-witted like his dad, Jeremy.

The blue-eyed blond-haired teenager played the trumpet in the Searcy High School marching band, loved the Chess Club and made A’s without much effort.

“He was extremely smart, and we used to joke that it must skip a generation; Jeremy and I weren’t near as brilliant as he was,” Jennifer said.

She has to speak in the past tense.

Jesse died by suicide Sept. 29, 2017, for reasons his parents are still trying to understand.

However, they believe bullying, primarily online, played a role in their son’s death.

Within a month of his death, two men — Walter Franklin, who has a band, and a friend, Joey Musick — had approached the couple and organized Jammin’ for Jesse, an all-day music event. The Jameses decided to use the proceeds to create the Jesse Dylan James Foundation, a nonprofit organization. It can be found on Facebook.

The second annual Jammin’ for Jesse event will take place from 4:30-10 p.m. Saturday at the White County Fairgrounds in Searcy. Four bands and a magician will perform during the evening, and there will be food, bounce houses, face-painting and 501 Rocks, a grassroots campaign to paint rocks with designs or uplifting phrases to leave around cities for people to find, and a silent auction. A dunking booth featuring Searcy community leaders will be available, as well as a photo booth with mustache props, because Jesse loved mustaches, his mother said. The event is free, but donations will be accepted.

Entertainment will be provided by Jason Coleman of Searcy; the Isaac Alexander Band of Little Rock; Jed Zimmerman; and Westbound Revival, which is Walter Franklin’s band.

A magician, Marty Boone of Conway, will perform tricks, and media personalities invited include Kevin Kelley of Fox 16 and Poolboy from Alice 107.7 FM radio.

Available at the event will be Jammin’ for Jesse T-shirts and stickers, along with blue bracelets that say Help Stop Bullying and Do Unto Others — blue represents bullying awareness — and turquoise-and-pink bracelets promoting suicide-prevention awareness.

“Last year, Jeremy and I didn’t have a whole lot to do with the planning [of Jammin’ for Jesse],’ Jennifer said. ‘We were still in a shock mindset. It was really just surreal to us that we were at this event. It didn’t even feel like it was about Jesse.”

“This year is about just trying to turn our tragedy into something good. We can’t just do nothing. We both have that drive to make things better. We have to take our tragedy to teach people what we’ve learned and try to prevent this.”

Jennifer and Jeremy grew up in Searcy. She is a graduate of Searcy High School; he graduated from Harding Academy. She teaches at The Sunshine School, and he’s at salesman at Bobby T’s Mattress and Furniture. They have a younger son, Jonas, 12.

Jesse, who was named for his great-grandfather, was an early Christmas present, born Dec. 16, 2002.

“He was just extremely shy; he always stuck to me like Velcro,” Jennifer said. He made good grades and was well-behaved, but his teachers asked Jennifer’s advice on how to get him to talk.

“He was one who didn’t like to draw attention to himself,” she said.

But he wasn’t a loner.

“He had a pretty close-knit circle of friends who had been his friends since Westside Elementary,” she said, plus new friends when it merged into Southwest Middle School. Jesse was in the ninth grade at Searcy High School, and he didn’t have a lot of friends in his classes.

He loved fishing and playing golf and video games, even writing code.

However, Jennifer said, she heard him talking to someone online while he was gaming, and it was a stranger. They had a discussion about not giving out his personal information. She and her husband told him not to talk to strangers online.

When he was found doing it again, he was grounded.

The last week of his life, he was a little out of sorts, but the couple attributed it to the fact that he was grounded, Jennifer said.

After Jesse died, she found out “he was showing concern, telling his friends … that he felt sad because he didn’t have any classes with a lot of his friends. He was nervous about high school,” she said.

“He chose to not take advanced courses his ninth-grade year, hoping, I think, that he’d get classes with some of his friends who weren’t in advanced classes, but he didn’t. He had the band, and that was basically it. He felt left out.”

Jennifer said Jesse was going through puberty and experiencing the angst associated with that.

The only time she noticed behavior that seemed odd, she said, was when she was later than usual picking him up for school one day, and he was upset.

“He was kind of frantic, afraid of something,” she said.

He went to bed a little earlier than usual that night, but she assumed he just was tired.

The next morning, Jennifer got her coffee, let out the dog and went to tell him she was getting in the shower, as was her routine. Jesse wasn’t in his bed, although his brother was asleep in the bedroom they shared.

At first she thought Jesse might have gone to one of the couches in the living room, but he wasn’t there, either.

She checked the house thoroughly, became frantic and woke up her husband.

But she had a sickening feeling that it was more than that.

“I thought, ‘Where would he have gone?’ We live out in the county.” She said their house is on her parents’ farmland, and her parents live across the highway from them.

They were also afraid someone might have abducted him.

The sheriff’s office was contacted, and Jeremy helped search their property. The word spread, and friends started showing up to help search, including a couple from Heber Springs. A helicopter flew over the area to look for him.

Jennifer, with a friend by her side, said she looked through Jesse’s backpack and found a journal with only one entry — a letter talking about what he planned to do.

“He had even stated that he knows that a lot of people would not have expected this from him and that he was just tired of … being overlooked and used up. He said — I don’t know who all he was talking about — that they needed him only for what they needed, ‘Thanks, man,’ and they’d toss him aside. He never used that word depression or even that he felt sad. He said he came to realize that he did not fit into a lot of things anymore, so he felt something was wrong with him.”

Her friends from Heber Springs didn’t wait for the organized search party and went out together. They found Jesse dead.

Later, someone in the online chat room sent a message to Jennifer and said Jesse had mentioned killing himself, but no one took him seriously.

Jennifer also learned that some teenagers taunt their friends to kill themselves.

“Kids nowadays — and I’m not saying all of them, but some — they speak in this demeaning language with one another. They will tell each other, ‘Kill yourself, or KYS.’ Never, ever have I seen that type of response or behavior in that young age; we were totally unaware of it,” Jennifer said.

She hopes good comes out of their tragedy.

“We want kids, high-schoolers and teenagers, to learn that words do matter, and that they do need to reach out if they have feelings, low feelings, being in a dark place. If they feel that way, they need to tell someone other than their friends, or a friend they know will tell someone else. It doesn’t have to be school authorities. … It can be your neighbor, your favorite teacher … anyone who might follow up. Always follow up, too. If anyone ever mentions anything [about suicide], you need to follow up instead of just think they’re OK.

“It’s never a joke. If someone is talking about suicide, don’t assume they’re joking. You need to point out to them that suicide’s not a joke; it’s serious.”

The National Suicide Prevention Lifeline, a free service available 24/7 to provide support, information and local resources for anyone dealing with suicidal thoughts or those around them, can be reached at (800) 273-TALK (8255).

The proceeds from Jammin’ for Jesse will go to a memorial scholarship in Jesse’s name for a Searcy High School band student.

The money will also be used for speakers or other support for two social-emotional learning programs in the Searcy School District — Capturing Kids’ Hearts and HeartBridge.

“It’s social-emotional learning,” she said. “It teaches students to be accountable for their actions.”

Among other aspects of the program, students “do good things at the beginning of the class period — students talk about something good going on in their lives. It gives them a voice, really.”

HeartBridge was implemented this school year in the junior high and high school.

It wasn’t in response to Jesse’s death.

“It was something we had been talking about for some time,” Bailey said.

“We knew how well Capturing Kids Hearts has worked. We moved it to the elementary level, as well, this year. We needed a more advanced curriculum for our junior high and high school students.”

The five aspects of the HeartBridge program are self awareness, self-management, social awareness, relationship skills and responsible decision-making.

HeartBridge is a small class, Bailey said, and the teacher gets to know each student.

“It’s great, especially for our ninth-grade students because they’re coming over to the high school. … It’s giving them a good, tight-knit group of students and a teacher to identify with,” she said.

“The [Jesse Dylan] James foundation was wonderful in saying they just want to use these funds for anything that will promote a positive spirit among Searcy schools and our students,” Bailey said. “We’re really building relationships between our teachers and our students.”

It has just been a year since Jesse’s death, and his family members are trying to find their footing.

“Some days are better than others; no day is good,” Jennifer said. “It’s been very hard, and it’s just one minute, sometimes one second, at a time getting through.”

“We have a great community; so many people have really just rallied around us,” she said.

Now she and her husband want to reach out to the community to make it stronger for Jesse.

“The only way our family can move forward is to share our tragedy, our story and our loss to save another’s life and lessen the associated stigma.”