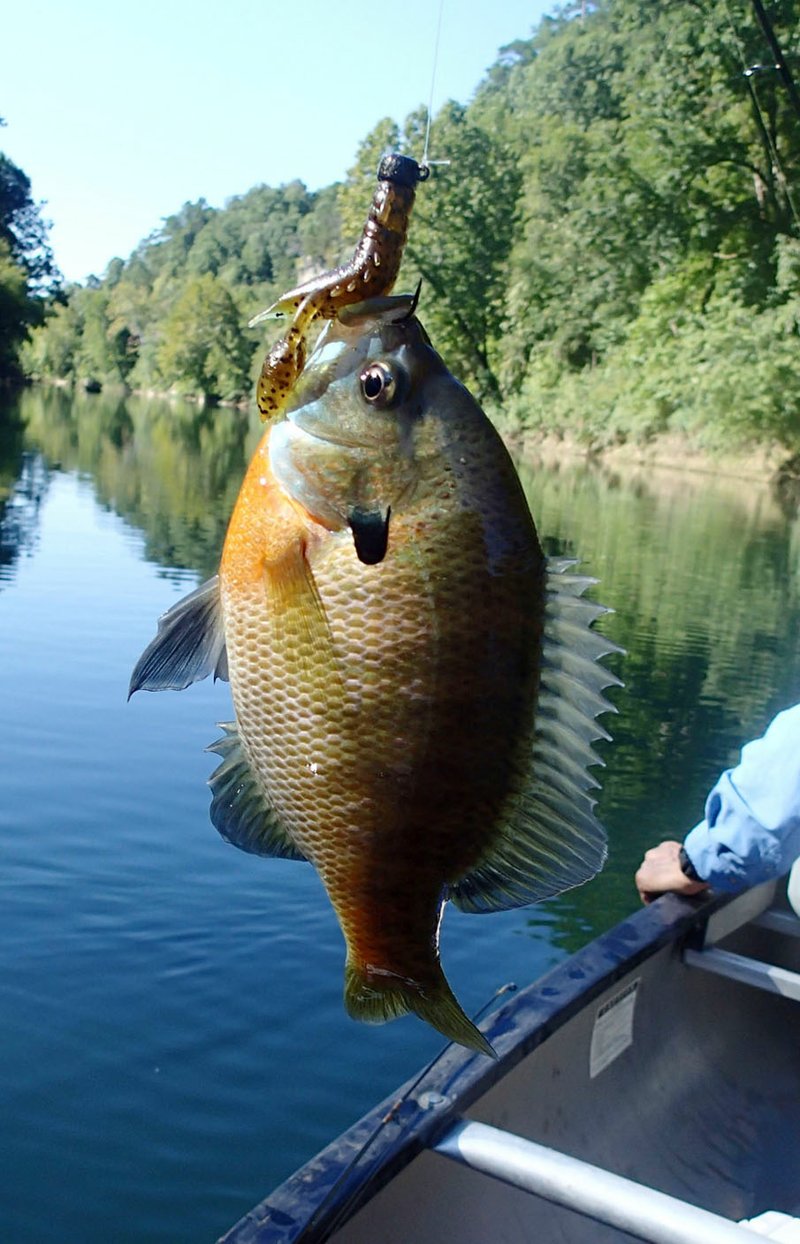 NWA Democrat-Gazette/FLIP PUTTHOFF A sizeable bluegill bit on a soft plastic lure on the Illinois River.

When tinges of color appear in the trees and mornings turn brisk and refreshing, paddlers who ply the Ozarks' streams begin thinking about a fall foliage float.

The menu of streams in Northwest Arkansas is lengthy with the Elk, Kings, War Eagle and Buffalo on the list. For a gentle, easy float with plenty of time for leaf peeping, the Illinois River is a wise choice.

The stream flows on a westward course through Washington and Benton counties before entering Oklahoma.

An eight-mile trip is from Chamber Springs access, southeast of Siloam Springs, to the Siloam Springs Kayak Park. A five-mile float starts at the kayak park and ends at Arkansas 59 bridge.

Forested shores hug both sides of the stream that twists its way through Washington and Benton counties before crossing into Oklahoma. The river will soon come alive with red, orange and yellow hues as autumn peaks.

Late October and the first week of November are normally prime color times in the northwest corner of the Ozarks.

A five-mile trip starts at the kayak park and ends at the Arkansas 59 bridge south of Siloam Springs. This one's a quick and pretty float, as Russ Tonkinson and a fishing buddy found out on a sunny Friday in September.

This was a new stretch of water for both, so excitement was high when they met owner Davey Espinoza at Highway 59 Canoeing and Rafting on the south side of the Arkansas 59 bridge. The shuttle to the put-in at the kayak park only took 20 minutes.

It was the Friday after Labor Day and Espinoza was breathing a little easier after another busy float season, which starts Memorial Day weekend. After Labor Day, the Illinois River is quiet and peaceful, even on weekends, he confirmed.

The outfitter unloaded a canoe and gear at the kayak park and was on his merry way. The two quickly realized they were literally up a creek without a paddle. They'd neglected to load their paddles on the trailer with the canoe.

Good thing for cell phones. A quick call and Espinoza returned with the paddles.

A couple of Class I rapids at the kayak park are fun to run. Then the river becomes a lazy stream. Long pools and short riffles are found on this five-mile stretch.

Paddlers pass a bluff or two, including a nice 30-footer. Banks of woods and pasture welcome floaters on this stretch, which is ideal for canoe and kayak paddlers of any skill level.

Fishing can be good, especially for smallmouth and spotted bass. Some hefty largemouth bass call the Illinois home as well.

Tonkinson beat the water to a froth casting a Whopper Plopper top-water lure most of the way. Tube baits and soft-plastic crawdad imitations seemed tempting offerings. Evidently the fish didn't think so. A handful of smallmouth bass of eight to 10 inches were caught, admired and released. A big bluegill ambushed one of the little crawdads.

Wading is another way to fish the Illinois River. That's how Kenny Stroud likes to fish the stream. Small tube baits are his favorite.

"I could walk the creek and catch a lot with a tube bait," Stroud said. He likes a tube that's 2 ¾ inches long, green pumpkin in color. Sometimes he dips the tail of the lure in chartreuse dye. Small jars of the dye are available at fishing stores.

Stroud catches mostly smallmouth bass, but said there are some big spotted bass in the river.

Tube baits catch the dickens out of black bass on most Ozark streams, "but I like to experiment," Stroud said. He carries a handful of Rooster Tail spinners to the river. Chartreuse, black-brown and fire tiger are favorite colors.

Paddlers will notice plenty of timber in the water, and rock piles, too. Stroud likes to work top-water lures like a Whopper Plopper around these.

Much of the Illinois River flows through the agricultural land of western Washington and Benton counties. Phosphorus, nitrogen and sediment runoff into the stream are a concern among paddlers, anglers, farmers and everyone concerned with water quality.

The partnership has received a $1.4 million grant from the Arkansas Natural Resources Commission to plant trees and native plants at five sites. A goal is to improve about 20 miles of shoreline.

Too much phosphorus or other nutrients (plant food) in a stream cause excess algae.

"When that algae dies, it uses up the oxygen in the water," Hardiman explained. Low oxygen levels are bad for all aquatic life in a waterway.

Hardiman said the partnership seeks private donations to add to the grant so even more stream bank improvement can be completed.

It's a welcome effort for all who enjoy floating the Illinois River during all or any season.