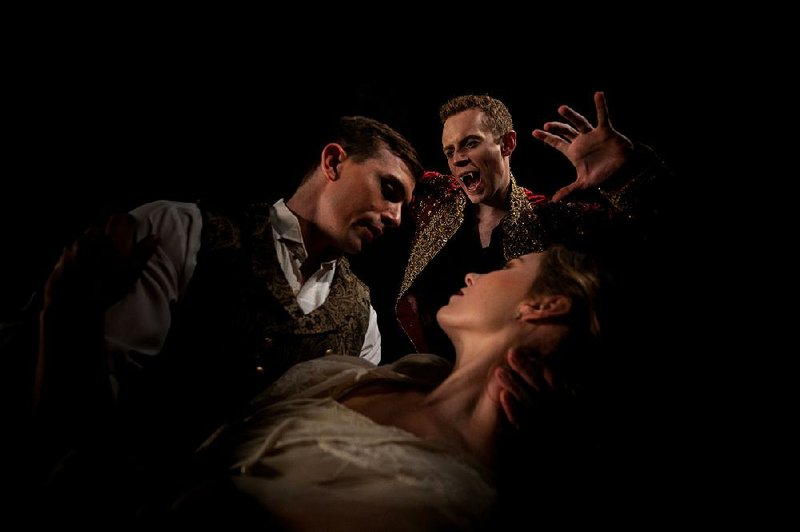 Toby Lewellen (left), Paul Tillman and Meredith Loy sink their teeth into acting as well as dancing in Dracula.

Rather than stick to the tried and true, a nice, familiar Coppelia or Cinderella, he decided it was time to stretch the company with a premiere piece that would test their acting chops as well as their dance steps.

Which is why Ballet Arkansas' 40th season opens this weekend with Dracula, the world premiere of a full-length ballet based on Bram Stoker's classic gothic tale, that Fothergill has set upon music by Sergei Rachmaninoff, Francis Poulenc, Franz Liszt, Dmitri Shostakovich and Gyorgy Ligeti, among others.

There are two casts. Zeek Wright and Paul Tillman will divide the title role (and when the one is playing Dracula, the other is dancing the role of Lord Arthur), with Toby Lewellen as Jonathan Harker, Deanna Stanton and Meredith Loy as Mina Murray, Hannah Bradshaw and Lauren Bodenheimer Hill as Lucy Westenra, Matthew Larson doubling as Dr. Van Helsing and Renfield and, as various vampires, Megan Hustel, Deanna Gerde, Lynsie Ogden, Belle Urben, Amanda Sewell and Kaley Kirkman.

The production, 7 p.m. Friday, 2 and 7 p.m. Saturday and 2 p.m. Sunday at the University of Arkansas-Pulaski Technical College's Center for the Humanities and the Arts in North Little Rock, will feature the dozen-plus members of Ballet Arkansas' professional company, plus mixed-media projections by Cranford Co., an advertising, marketing, digital, video and social communications firm that is their next-door Main Street neighbor, and the 360-degree sound system that the venue offers.

Oh, and a certain amount of blood.

"It's not terribly gory, but we will have a little bit," Fothergill says. Some of it will be visible via photo projections; some of it will come from onstage blood capsules. (One of the production challenges will be to carefully control things so the substance goes only where it's supposed to.)

That and the focus, reflective of Stoker's story, on the love triangle between Count Dracula, Mina Murray and Jonathan Harker, while "not too lustful," Fothergill says, should guide parents on whether or not to bring small children.

The proximity to Halloween also guided Fothergill toward the vampire tale. "Given the time of year, it's the perfect way to kick off the 40th [season]," says Catherine Fothergill, the company's associate artistic director. (Audience members are encouraged to come in Halloween costumes to the Saturday evening show.)

And, says Michael Fothergill, "it's something the community hasn't seen before." He picked the music, he says, "to match the feel of the storyline." Although the composers are probably familiar, he adds, the pieces probably aren't -- they're "obscure, all ambiguous, eerie as I could find."

Accenting the performances will be a range of visual and audible effects. "Cranford and [Pulaski] Tech have played a huge part in the development," Michael Fothergill says.

Visually, the show includes projections of things like time-lapse photography of a rose and the actors knocking on an actual church door while the audience hears the knock through the theater's surround-sound system.

More importantly to the Fothergills' long-term plans for Ballet Arkansas, it provides company members a way to develop additional dimensions as performers.

Catherine Fothergill explains, "You see them grow as artists a lot doing a story ballet."

And it also gives them a chance, says Michael Fothergill, to explore "negative emotions ... and to be villainous."

He adds, "They experience how to approach acting, in a full-scale sense. I've been very impressed to see their intuition, their growth dramatically in roles they're not used to doing."