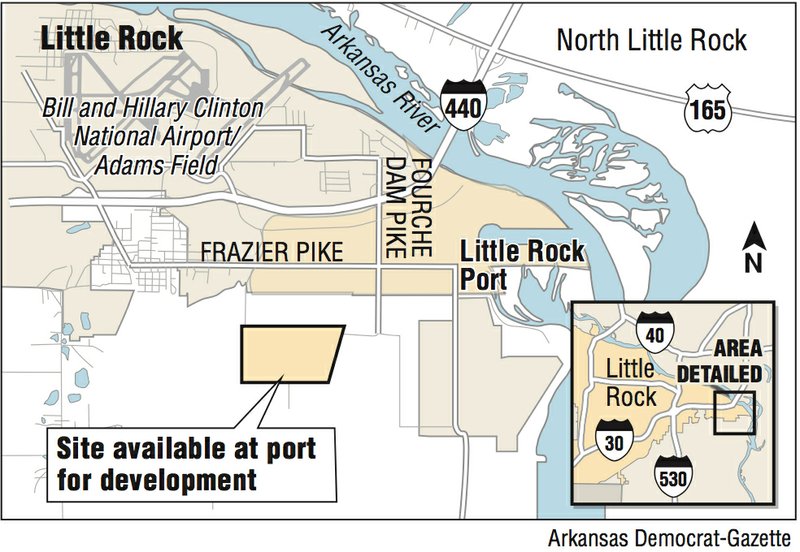 A vacant 160-acre site at the Little Rock port earned a designation Wednesday that port officials hope will make the land more marketable to industry prospects.

The Select Site certification by Entergy Arkansas is the first under a recently revamped economic development tool the electric utility has used for more than a dozen years to help attract industry and jobs to the state and new customers to its grid, said Danny Games, business and economic development director for the utility.

Entergy also announced two other Select Sites on Wednesday -- a 76-acre site in Newport and a 60-acre site in Russellville.

The Select Site label means environmental, utility, ownership clearances and other preliminary work have been done on the property and it is "shovel-ready." In other words, it is three to four months of work boiled down to a "three-ring binder," Games said.

"Oftentimes, it is what I refer to as a differentiator," he said after formally announcing the Select Site certification at the port. "If one community has gone through all this due diligence and can provide this third-party documentation and validation and another community says we'll get that taken care of, the first community wins every time because you've eliminated time, you've eliminated risk, you've put yourself in a much better position than what might turn up."

Select Site certification turned out to be a "differentiator" for LM Power, a global leader in the production of blades for wind turbines that wound up opening its third production plant in North America at the port in 2008. The company employs several hundred workers at the facility.

Games recalled he and Paul Latture, the port's top executive at the time, meeting in the Spring of 2007 with a site selection company executive and an LM Windpower official to go over, among other things, an overview of the property, "asking all of the pertinent questions we have in our table of contents."

The project "moved pretty quickly" after that, he said.

Bryan Day, who has been the port authority's executive director since 2014, said he is still relatively new to economic development, but he recognizes the significance of the certification.

"What I learned quickly is the single greatest asset you have to have to compete is a good site ... ready to go sites," he said. "This program with Entergy has elevated our status in the economic development world."

Mike Preston, the top official at the Arkansas Economic Development Commission, said the certifications of the sites at the Little Rock Port Authority, the Russellville East End Industrial Park and the Newport Airbase Industrial Park underscore that "Arkansas is open and ready for business."

"When a city has a certified site, it elevates its status in the minds of business executives and site location consultants, and improves economic development opportunities," he said.

The property on which LM Windpower sits was one of the first properties certified under the Select Site program. But what worked then might not be enough now, hence a review of the program was undertaken, Games said.

"Earlier this year, we pressed a reset," he said. "We saw that there were opportunities and areas where it needed to be improved and tightened up and made a little more relevant to the demands of industry and site location decision makers today. That's what this work reflects. It reflects a renewed refreshed, revamped site criteria."

At the same time, the 160-acre port property needed a refresh. The property was purchased by a business prospect about 10 years ago at which time the business undertook the preliminary work, which Games said can cost between $20,000 and $30,000.

So updating the property's documentation, which included a new environmental study, wasn't costly but did take about three months, largely the product of Ben France, vice president of economic development for the Greater Little Rock Chamber of Commerce.

"If anyone is looking for a site close to the river, close to the airport, close to the rail, close to the interstates, here's all the documentation," Day said. "We felt this certification would help market this property in a way we couldn't put a price tag on."