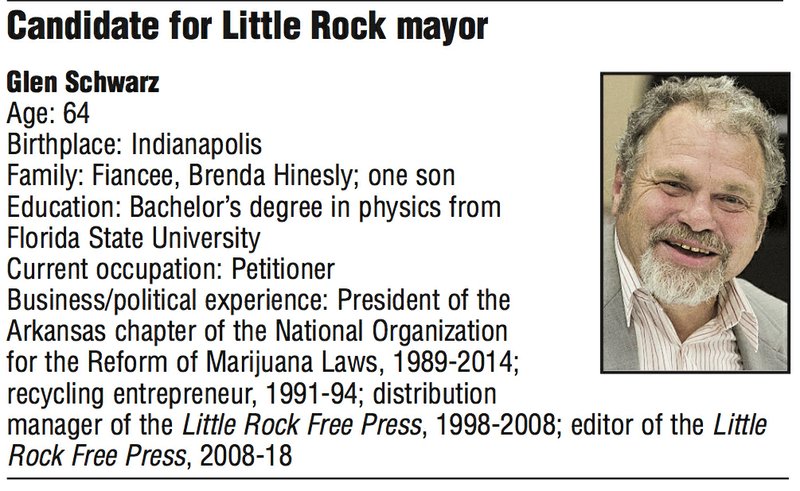 This is the third in a series of profiles of Little Rock mayoral candidates.

Glen Schwarz looked over the Little Rock amphitheater, reminiscing about when crowds flocked to the venue in the 1990s. Back then, Schwarz sold jewelry made of hemp, a variety of cannabis, from "hippy tables" at the shows.

Cannabis has long been a passion for Schwarz, who is now a Little Rock mayoral candidate. He helped form an Arkansas chapter of the National Organization for the Reform of Marijuana Laws, or NORML. The group originally formed in the 1970s but withered away until Schwarz revived it in 1989, serving as its executive director for 25 of its past 30 years.

"I was a real voice in the wilderness," Schwarz said.

Through the group, Schwarz, 64, is actively lobbying for marijuana changes, hoping to legalize it for recreational use.

As Little Rock mayor, Schwarz would hope to create legislation to allow law enforcement officials to assess $100 fines on marijuana-users caught with the drug instead of charging them with crimes.

Jay Barth, a Hendrix College professor and organizer of the Talk Business and Politics/Hendrix College Poll that gauges Arkansans' political views, doubts that fines would be possible because of Arkansas laws banning recreational marijuana.

Schwarz said fines would keep people from going to prisons and jails for marijuana-related crimes. He said he has personal experience because police charged him with four felonies over marijuana use in 1995. A judge removed the felonies from his record in 2010, allowing him to run for more public offices.

Schwarz has taken full advantage of his right to run for public office. He has campaigned for nine city, county and state elected positions, making this election his 10th, but he has never been elected to a position, he said. If he doesn't cut it as mayor, he'll next run for a city director position. But, that would be his last bid for office, he says.

"Oh, it's my privilege to run," Schwarz said about why he continues to run for office.

Jim Dailey, who was mayor for 14 years, thinks that because Little Rock has few requirements to run for the mayor's office, it's been easier for Schwarz to run.

"It doesn't really cost you anything," Dailey said.

Most cities have at least one resident who perennially runs for public office, Barth said.

In previous campaigns, Schwarz often received votes because he was an alternative to the mainstream politicians, but in this year's race there are a variety of candidates with markedly different political views, making Schwarz just another candidate, Barth said.

But by running for 10 public offices, Schwarz has drawn attention to his fight for marijuana, which has consistently been Schwarz's priority issue, Dailey said.

Through those races, Schwarz received free publicity from the media and from making public appearances like at the mayoral forums, Dailey said. Schwarz believes strongly in the marijuana cause, which Dailey said he respects even though he doesn't agree with it.

"That to me is the sign of a good citizen," Dailey said. "I'm proud that he steps up and puts his name out there and is running for an office," Dailey said.

Besides championing for marijuana, Schwarz said he wants to provide recycling for the entire community and limit such waste going to the dump.

To reach people who live in apartments, Schwarz hopes to increase the locations where residents can drop off their recycling. He hopes to add four centers, one each at War Memorial Park, the Southwest Community Center, and in the Chenal and downtown areas.

Along with those environmental efforts, Schwarz would like to prepare for the possibility that global warming will cause sea levels to rise drastically in the next 10 years. He said he thinks rising sea levels would force people who live on the coast to move inland, skyrocketing Little Rock's population.

Schwarz would like to start increasing building in preparation for the population boom. He wants to see Little Rock use taller buildings to hold more people per square mile. Schwarz thinks that could develop into areas of town that function as separate villages, which could be connected by some form of transit system.

A more immediate problem Schwarz says is "bums" around town who ask people for money.

"We have a bum on every corner just about," Schwarz said.

He does not have a specific plan to help such people, but he would like to work with Little Rock's government to prevent such people from panhandling, something the Supreme Court has ruled they have a right to do.

Schwarz wants to be a part-time mayor and limit his time in the office to 20 hours a week.

He has previously run as a Republican, an independent and a Libertarian, but he decided this year to enter a nonpartisan race to see if, without a party label, his luck might change.

Schwarz has run a grass-roots campaign, spending few dollars in comparison with his opponents who have billboards plastered all over the city. He's up against fierce competition to get his message out, facing competitors who can pay to promote their platforms.

Brenda Hinesly, Schwarz' fiancee, says he's the kind of mayor she would want because he's a good person.

"Well, I think he's a good, honest person," Hinesly said. "He's knowledgeable. I don't know a lot about politics, but I think he would do a good job for the people."

The two have known each other since Christmas Eve 1982 when he moved into her apartment complex, she said. At first they dated on and off, Schwarz said.

"But we're it," Schwarz said. "We have a good time together."

Schwarz has one son from a previous relationship. His son has been an Army captain for 16 years.

Schwarz attended Florida State University, pursuing a degree in physics. After college, he and a friend moved to Reno, Nev., to try their luck betting on football games. He eventually became homeless for six months and then moved to Arkansas to be with his mother in 1982. It took him about a year to find a job in Arkansas, but he landed a position working in a hardware store.

He became a teacher in 1986, working at a school for children with behavioral problems, he said making a circling motion close to his head with his index finger to indicate the kids had mental health problems.

In 1991, Schwarz began working with Kroger to place recycling bins outside the stores. He did that until a dispute developed with a manager in 1994, ending the deal.

After being the distribution manager of the Little Rock Free Press for roughly 10 years, he took over production of the free weekly after it went under in 2008. He edited the newspaper for about 10 years, but he thinks last year's issue will be his final one. Schwarz thinks it might be time for him to focus exclusively on his career as a professional petitioner, where people recruit him to collect signatures for petitions.

None of this is typical of a mayoral candidate. Schwarz does not have a typical politician's resume because Schwarz is not a typical candidate. He's not primped and polished. He showed up to one of the mayoral forums wearing a t-shirt with a print of a tuxedo on it. But he says he is the candidate who will work the hardest for marijuana reform, the biggest issue he sees the city facing.

"Nobody asked me to run for mayor," Schwarz said. "I'm like a self-actualized guy. It comes from within."