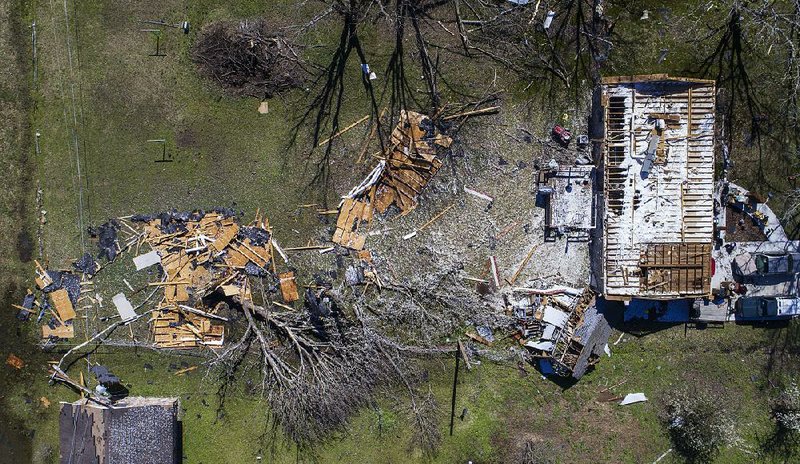 A tornado ripped the roof off this home in the White County town of Higginson in March 2017. According to researchers, the chance of tornadoes will become more frequent in Arkansas and surrounding states with shifting weather conditions.

The number of tornadoes in Arkansas will likely increase over the next 100 years, based on a study published Wednesday in the journal Climate and Atmospheric Science.

The article says weather conditions that spawn tornadoes will likely occur more frequently in the Mid-South over the next century, said Dennis Cavanaugh, warning coordination meteorologist with the National Weather Service in North Little Rock.

"They say if this trend continues, you can expect more tornadoes in the Mid-South, which includes Arkansas, Mississippi, Alabama and western Tennessee," he said.

The researchers, Vittorio A. Gensini and Harold E. Brooks, used a parameter that measures the energy for a thunderstorm by the amount of wind shear or spin in the atmosphere, said Cavanaugh.

"Wind shear generates the spin, and the thunderstorm basically sucks up the spin and that's what causes the tornado," he said. "The thunderstorm is like a vacuum cleaner, and the spin is just there because of wind shear."

"It's hard to use any metric and know how the tornado database might change over 100 years because we haven't been measuring tornadoes for over 100 years," he said. 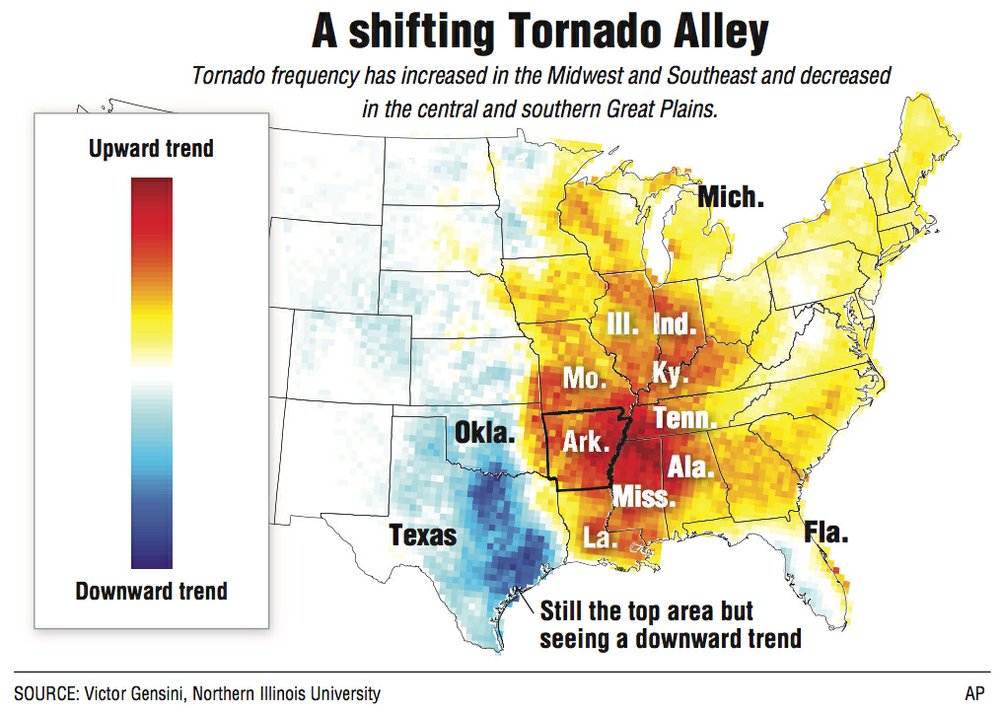 A standardized tornado database was developed in the 1950s, but it wasn't all that good until the 1970s, Cavanaugh said.

The reporting method used for the study also counted some tornadoes more than once, as they left one county and entered another, said Cavanaugh.

Arkansas had 36 tornadoes last year, Cavanaugh said, but the NOAA's National Weather Center database lists 40. That's because some of those tornadoes crossed county lines and were counted twice, he said. The database lists a record 108 tornadoes in Arkansas in 1999, but only four in 1992.

"We get tornadoes in the Ozarks and Ouachitas that probably aren't reported because all they hit is trees," Cavanaugh said. "There's nobody to see those trees get knocked down or destroyed, so they're not reported."

A shift to the east appears to be occurring, according to the study.

"Research has identified evidence of a 'Dixie Alley,' which represents an eastward extension of the traditional 'Tornado Alley' in the central Great Plains," according to the study. "However, this could be due to the techniques used to smooth reports in space and time."

Then there is the "effective 100th meridian," a line of longitude that basically severs the Oklahoma panhandle from the rest of the state. Historically, it has been considered the dividing line between the arid west and the more humid east.

"A general rule of thumb is you generally don't get severe weather west of the 100th meridian," Cavanaugh said. But the study, citing previous research, indicates the 100th meridian has shifted east to the 95th meridian, which goes between Tulsa and the Arkansas state line.

In some cases, there are discrepancies between the number of tornadoes being reported and the frequency of environments that spawn tornadoes, according to the study.

There has been a slight decrease in the Great Plains, with the biggest drop in central and eastern Texas. Even with the decline, Texas still gets the most tornadoes of any state.

The study's lead author Victor Gensini, assistant professor of atmospheric sciences at Northern Illinois University, said the shift to the east could be deadly because the area with increasing tornado activity is bigger and home to more people, according to The Associated Press.

The deadliest tornadoes have occurred in the Mid-South from northeast Arkansas through Memphis into northern Mississippi and Alabama, said Tom Salem, a meteorologist with the National Weather Service in Memphis.

A 2007 study speculated the reason was nighttime tornadoes, more mobile homes and a lack of visibility, he said.

"We get quite a few nighttime tornadoes," Salem said. "And we can get them any time of the year, too."

On the plains, a tornado can be seen from some distance away. That's not always the case in the South.

Even though Texas, Kansas and Oklahoma get many more tornadoes, the four deadliest states for tornadoes are Alabama, Missouri, Tennessee and Arkansas, according to the National Oceanic and Atmospheric Administration.

The study looked at changes since 1979. Everywhere east of the Mississippi, except the west coast of Florida, is seeing some increase in tornado activity, according to The Associated Press.

"They can't tell if this is a natural cycle or a climate change issue," Salem said. "It could be a combination of both."

Overall there is a slight increase in tornado activity, but it's not too much and not nearly like what's happening in the east, Gensini said.

Why is this happening?

"We don't know," Gensini told The Associated Press. "This is what you would expect in a climate change scenario, we just have no way of confirming it at the moment."

"I guess I would encourage people to be aware of and have a way to get weather information, but not to be afraid just because we might get some more dangerous storms," he said.

Have a plan, he said.

"Know what you're going to do, and have a safe place to shelter."