Scott got lost in hometown, found path to politics 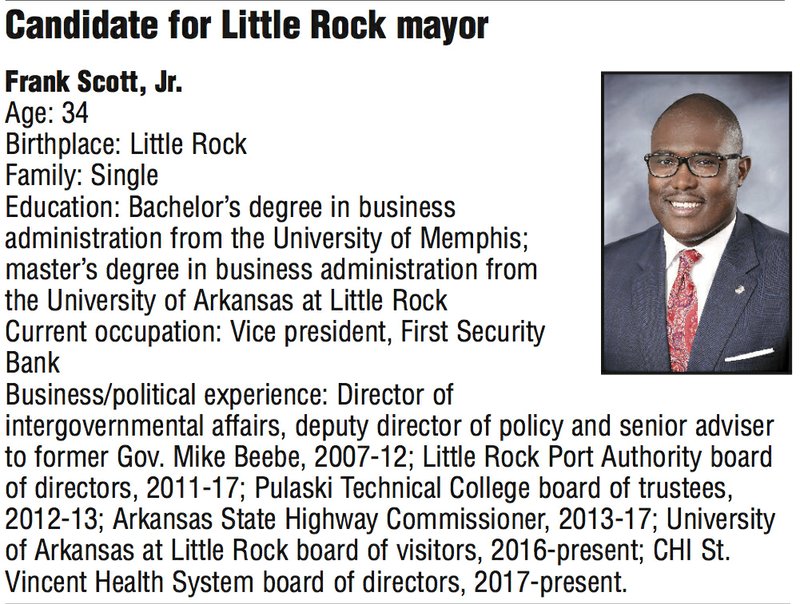 At 22, Frank Scott Jr. had been hired to work on policy in the Arkansas state Capitol, but friends had to give him directions to a part of the city where he had never been.

Growing up in southwest Little Rock, where he still lives off Chicot Road, Scott seldom ventured north of Interstate 630, and the people he'd met working for former Gov. Mike Beebe that he was meeting at a popular restaurant on Kavanaugh Boulevard seldom went south of it.

Now, even with the city's increased development and diversity, he says the disconnection -- and limitation of opportunities to those with the right circumstances -- hasn't changed. His choice to run for mayor of his hometown, in part, came out of frustration with that, illustrated by an interstate that divides the city racially and economically.

The son of a firefighter and a mother who had his older sister as a high school freshman, Scott believes he could be "dead, in jail or not on the right path," like some of the people he grew up with, if it wasn't for the opportunities he's had.

"I'm no different than anybody I grew up with," Scott said. "It's a humbling experience to be where I am right now, but it's a huge responsibility."

Scott gets teary-eyed when asked about his mentors and role models, saying he stands "on the shoulders of giants." Among them is his mother, Brenda Scott, who pushed him to be the first person in his family to go to college. He said he didn't have a particular interest in business or politics, or even going to college, if she hadn't been so dead-set on him breaking the cycle.

But J.J. Lacey, a retired administrator with the Little Rock School District, was an assistant principal at Parkview High School while Scott was a student, and said he knew the now-34-year-old would be successful.

"He just stood out from the pack, both on the football field and in his classwork," said Lacey, who's kept up with Scott since, as a friend and mentor.

Scott's first political experience came from volunteering for Tennessee legislator Lois DeBerry's campaign while a student at the University of Memphis. After graduating, his job as a Target distribution manager had him working nights and weekends, so when looking for things to do during the day, he got involved with another political campaign -- former Arkansas Gov. Mike Beebe's in 2006.

Morril Harriman, who headed Beebe's transition team when he got elected and served as his chief of staff, said Scott was one of the first people he hired in the administration. Though Scott was in his twenties and didn't have a background working in government, Harriman said he got "this impression of a young man who wanted to learn, who wanted to be committed, who wanted to make a difference."

"The governor and I continued to give him more and more responsibilities," Harriman recalled. "Whatever responsibility he was given he handled it well."

Harriman said Beebe "pretty well relied on" Scott to be a liaison to other levels of government. That led to an appointment to the state Highway Commission, when Beebe "took a chance on, now, a 29-year-old," in Scott's words.

"Here's what I know: I knew I did not deserve it, but I did earn it," Scott said.

In working on transportation issues in central Arkansas, Scott's contemporaries on the commission remember him as focused and analytical, yet gregarious and able to fit into any group of people he needed to. Commissioner Robert Moore Jr. cited Scott's ability to find solutions and make the best use of limited funds.

"Regarding the 30 Crossing project, what stood out to me was Frank's concern that all views were heard and considered in an attempt to find common ground," commissioner Alec Farmer Jr. said in an email, referring to the project to remake the 6.7-mile Interstate 30 corridor through downtown Little Rock and North Little Rock. Scott has expressed support for the project for safety reasons.

Citing that experience, Marion Humphrey, a retired circuit judge and another friend of Scott's, described him as "seasoned beyond his years." But he said Scott would bring the vigor the office needs.

"He's a great advocate for the city and for its people, and I think we need someone like that at this time," Humphrey said. "We need leadership that is strong and positive and has a vision."

"I just think he loves the city a great deal and has a lot of good ideas that will transform the city and effect real change -- and I certainly know he will put in the hours necessary," he said.

Scott began mentioning the idea of a mayoral run in conversations with friends, including Antwan Phillips, over the last few years. Phillips, a lawyer in Little Rock, said Scott is by nature thoughtful and reserved, but saw that Little Rock was at a critical junction and felt compelled to step up.

"That's not his personality, but I think he understands what the stakes with this election are and how important it is," Phillips said.

Phillips said he and Scott have been close friends for more than a decade, including friendly competition and mutual inspiration. He said the campaign has brought out the passion Scott has for Little Rock even more.

"The city needs a person who understands and has credibility whether you live in College Station or Chenal or the Heights or Baseline," Phillips said. "He's afforded a wide view of what Little Rock looks like, in all shapes, forms, sizes, races, economic status, location, and there's a disconnect from all of those different factors in our city. I think Frank is the person in this race who can build those metaphorical bridges."

For Scott, the drive he makes every day from his home off Chicot Road to his office on Ranch Drive is a reminder of Little Rock's contrasts and inequities. He now works as a vice president at First Security Bank, a position Humphrey said he's used to help local churches finance their building efforts.

Scott considers himself a "proud product" of southwest Little Rock and said he chooses to live in the same part of the city he grew up in because he doesn't want to forget where he came from.

But to move beyond static growth and create a city that's open for business for everyone, he said, Little Rock needs to capitalize on its diversity. He believes he's the person with the understanding of the city to do that.

"You see so much that is wrong with the city, and you know you have a plan to address it," Scott said. "When you're getting asked to be helpful, to help lead this city, and the powers that be choose not to listen to you, it's time to step up and lead."