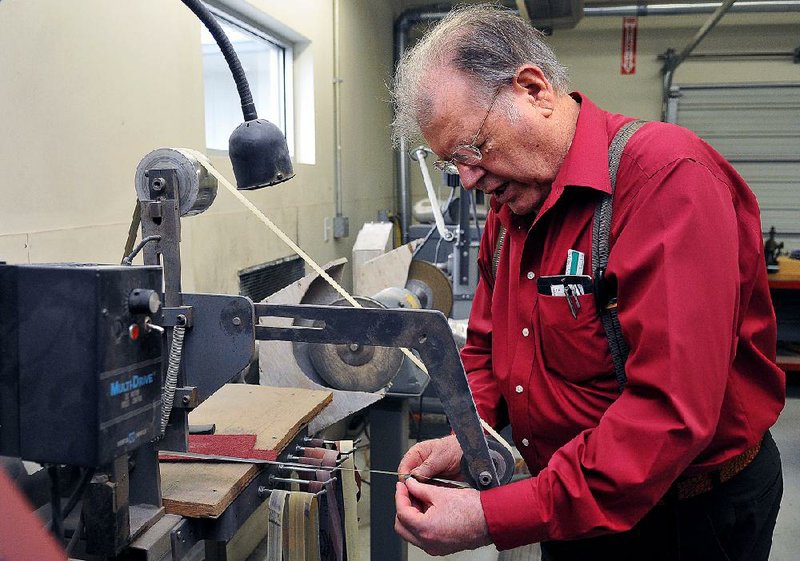 A.G. Russell, shown demonstrating a belt grinder in 2009 at the A.G. Russell Knives facility in Rogers, started his company in 1964 and was a founding member and honorary president of the Knifemakers Guild.

ROGERS -- A.G. Russell, 85, an innovator and icon in the knife industry, died unexpectedly on Oct. 12th during a routine angioplasty.

His widow, Goldie Russell, the president and chief executive officer of A.G. Russell Knives for more than a decade, says that despite the loss, the business will continue to serve its thousands of customers around the globe. A.G. Russell knife designer Phil Gibbs said the company still has hundreds of designs created by Russell himself, many of which will eventually make it to the marketplace.

A.G. Russell, born Aug. 27, 1933 in Eudora, said on the company website that he had been designing knives "almost since I could first hold a pencil." He said his grandfather helped him make his first knife when he was 9.

Russell was a founding member and honorary president of the Knifemakers Guild in 1972, and an inductee into Blade magazine's Cutlery Hall of Fame in 1988. He was the first to target the niche knife market more than 50 years ago, initially through mail order and then as a pioneer in Internet sales.

Today the Rogers-based company employs about 40 people and sells used and handmade knives through The Cutting Edge online and print catalog, sells knives and cutlery through the A.G. Russell Knives catalog and website, and operates the lifestyle brand Russell's for Men.

D'Alton Holder, owner of D'Holder Custom Knives in Arizona and a longtime friend of Russell, said that without Russell there would be no modern knife industry.

"He drug this business out of a 200-year history of nowhere and into the Golden Age of knife making," Holder said.

He said that when the U.S. knife industry was in its infancy, Russell crisscrossed the nation gathering a handful of knife-makers and cobbling a list of customers. From that he created his first mailing lists that would be invaluable as he kicked-off his mail-order retail operation.

"While a lot of us were fighting over participation trophies, he was building an industry," Holder explained.

Total U.S. revenue in the sporting knife and tool industry was $953.7 million in 2014, according to the American Knife & Tool Institute, a trade group. The industry employed nearly 5,000 people in 2014, the most recent data available.

Bob Dozier, Arkansas knife-maker and founder of Arkansas Made Dozier Inc. and Dozier Knives, worked for Russell designing and building knives in the early 1970s and says he still considers himself an A.G. Russell knife-maker.

He recalled that in the early days, knife making was such a cottage industry that even outdoor magazines didn't write articles about it. He recalled seeing Russell talking on the phone drumming up interest in the budding industry from magazines like Guns and Ammo, Outdoor Life and even Sports Illustrated.

Wally Gardiner, CEO and owner of Canal Street Cutlery Co. and former president of knife-maker Imperial Schrade Corp., said he's known Russell since 1977. During that time Russell proved himself to be a man passionate about his wife, his employees and the U.S. military, Gardiner said, noting that Russell donated thousands of knives over the years to members of the armed services.

What Russell really loved was people, Gardiner said. Russell, he insisted, loved interacting with his customers in the company's showroom.

"He's spend six hours a day, even when he probably shouldn't have," Gardiner said.

B.R. Hughes of Texarkana, an educator, journalist and author who has written about knives for decades, credits Russell as a valued source who taught him everything he knows about the industry.

"He was a walking encyclopedia on handmade knives and he was a goodwill ambassador for the industry," Hughes said of Russell. "They'd call him Mr. Knife.

"His passing leaves a void in the world of handmade knives that will never be filled," Hughes said.

Russell started his company in 1964 selling Arkansas whetstones used to sharpen knives. A natural extension was to begin selling knives themselves. He and his wife Goldie, after years of growth in Springdale, moved in 2002 to the company's current Rogers location, which can easily been seen and accessed from Interstate 49.

Jarrellyn Martin, the company's marketing manager, has worked for more than 20 years at A.G. Russell Knives, where she started as a receptionist. She said Russell was a great teacher and mentor whose spirit infused the company.

"It's going to be hard not seeing him walking the halls," she said.