Tolliver seeks to represent all in Little Rock 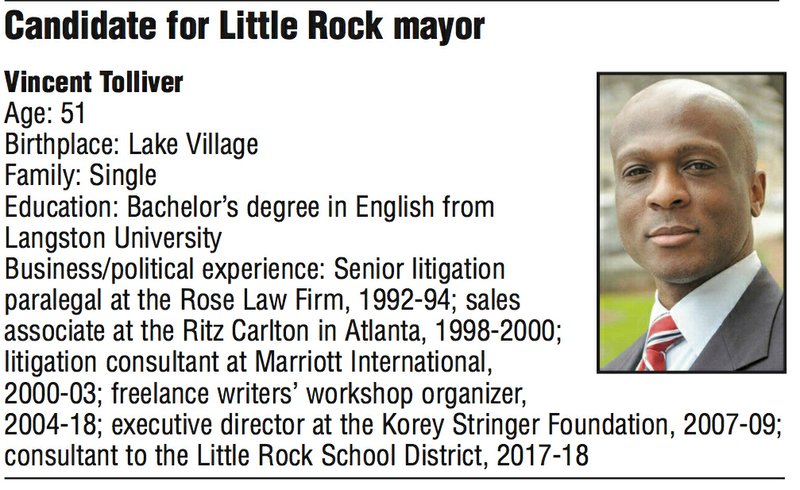 Vincent Tolliver has been a lot of things in his 51 years. He's been a writer and a waiter, a director and a school district consultant, a sales worker and a starving artist, an activist and a cotton farmhand. After Election Day, Tolliver plans to add Little Rock mayor to the list.

Tolliver has a list that's crammed full of ideas for tackling problems in Little Rock. He wants to change how the mayor's office works to give the mayor more power and eliminate Little Rock's three at-large city director positions and instead assign a director to each ward.

Researchers with Hendrix College in Conway reviewed half a century of Little Rock voting records and concluded that at-large ward elections limited minority representation in city government for the examined time span and squelched public voices for a large portion of the city. That makes it a top issue, something Tolliver would like to change.

"He's high energy and, you know, is occasionally a little combative because of that perspective that he has that the city has left so many folks out, so he's willing to step on some toes for that," said Jay Barth, a Hendrix College professor and organizer of the Talk Business and Politics/Hendrix College Poll that gauges Arkansans' political views.

Tolliver said his campaign is "right on target.

"I think our message is reaching and resonating with the voters of Little Rock."

Part of his message is the return of local control for the Little Rock School District.

The state took over the district in January 2015 because of chronically low test scores at some schools. The school board was removed, and the superintendent was placed under the direction of the state education commissioner.

Tolliver would also like to change the physical infrastructure of Little Rock to tackle repair needs in Wards 1, 2 and 7 -- the wards that require the most immediate attention, he said. Improving walkability in Little Rock is also a high priority for Tolliver. He foresees trails connecting the different areas of Little Rock to ease travel from ward to ward.

Before Tolliver moved back to Little Rock, most of his life was dedicated to the literary arts. He has written five books, three screenplays and a few songs, including music in the country and blues genres. Tolliver wrote a memoir of Christine King Farris, the only living sibling of Martin Luther King Jr., and the first book Tolliver wrote is a collection of poetry about growing up in Lake Village in southeast Arkansas.

Tolliver lived in that town with his mother and two siblings. He began working as a cotton chopper when he was 10 years old. As a teenager, Tolliver spent three summers living in Little Rock working as a cashier at Sear's. He lived with the Whitesides, whom he calls his Little Rock family, he said.

Tolliver graduated in 1985 and spent his first year of college studying political science at Hendrix. The next year, he moved to the University of Southern California. After that, he took a 12-year break from education.

For Beverly Foringer, a cousin of Tolliver's, he was always like a big brother, she said. She has always loved watching Tolliver's many adventures, describing him as pioneering and dauntless.

"He's one of those people who always puts the action where the words are," Foringer said.

Tolliver landed back in Lake Village at age 28 with high hopes of winning the 4th Congressional District seat as a Democrat. Tolliver said he was heartbroken when his party didn't rally around him. Despite the Democrats' lack of support, Tolliver scrapped together 36 percent of the vote, shocking entrenched politicians of the day.

"So I checked out of politics for a long time after that because it was so painful and disappointing," Tolliver said.

After the election, Tolliver lived as a writer, supporting himself by working odd jobs and waiting tables.

In 2004, he graduated from Langston University, receiving his degree in English. When he moved back to Arkansas in roughly 2013, he spent his time volunteering with Grassroots Arkansas and the Little Rock School District, where he also worked as a substitute teacher and last year began serving as a consultant.

Tolliver ran for Democratic National Committee chairman last year but was disqualified after saying Muslims discriminate against LGBTQ people. Tolliver said the party misconstrued his comments as an attack on Keith Ellison, a candidate who is of the Islamic faith. Tolliver meant that the faith speaks out against the gay community and that in some Islamic countries being gay is punishable by death.

Tolliver apologized to Ellison and said Ellison understood his statement, but he was removed from the race.

Since last year's race, Tolliver has been working in his consultant position with the school district, where he organizes professional development days and workshops. He met his friend Barclay Key, a University of Arkansas at Little Rock associate professor, working as a substitute in the district. Key supports the issues Tolliver has touted throughout his campaign.

"They are important. They're not popular with the rich folks of the city," Key said.

Key described Tolliver as a candidate who will not cow to powerful Little Rock groups.

"Well, he's not a wealthy person who will answer to the Chamber of Commerce or any of the other so-called important families in the city," Key said.

Tolliver has run a low-budget campaign, but "what I know for sure, money doesn't vote. People vote," Tolliver said.

These days, people can find Tolliver at Raduno Brickoven and Barroom on South Main Street, where he stops between meetings. Bo Bennett, the general manager, plans to vote for Tolliver because he likes that Tolliver would be a hands-on mayor, which Bennett said he thought Mayor Mark Stodola isn't.

"There's an every-man sensibility with him," Bennett said of Tolliver.

Tolliver is someone who's worked job after job to get where he is today and is willing to fight for Little Rock, he said. He hopes that Little Rock residents vote for him because they see themselves in him. He's been poor. He's worked minimum wage jobs. He grew up with a single mother. He sees the city through the unique perspective of a black man, perfectly suited to connecting the people of Little Rock, he said.

"It would be great for the city because as an African-American man, you have a particular and specialized lens through which you view the world, and for Little Rock to have a mayor who has a deep understanding across the divide, if you will, gives the city a unique opportunity to connect, bridge the gap, unite and ultimately grow and flourish," Tolliver said.

Print Headline: Tolliver seeks to represent all in LR