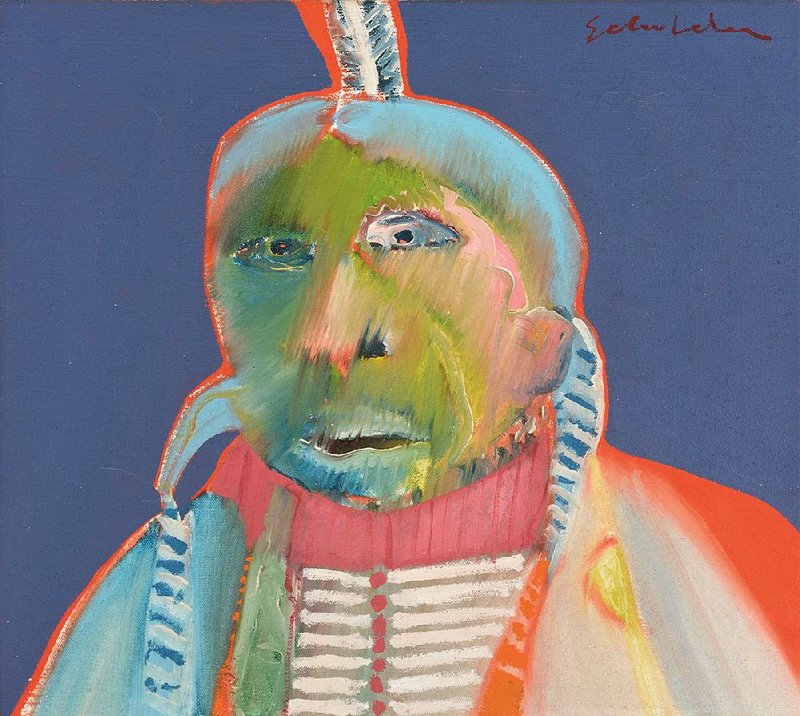 Fritz Scholder’s Monster Indian, a 1968 oil on canvas, seems more vulnerable than monstrous. It is among some 80 works at the exhibition “Art for a New Understanding: Native Voices 1950s to Now,” organized by Crystal Bridges Museum of American Art.

BENTONVILLE -- Art is in a real sense a war on cliche, it is a way of seeing better than our first glance. And so Crystal Bridges Museum of American Art means to engage with one of the comfortably numb corners of the American scene with its new, free exhibit "Art for a New Understanding: Native Voices 1950s to Now" -- a look at work made by American Indian artists since 1952 that challenges (and occasionally subverts) the idea of Southwest kitsch and the aura of noble mysticism that attaches to our idea of Indian art.

Despite the prevailing notion of such art as decorative and tchotchke-ish, even a casual stroll through the current show is liable to explode notions of earnest solemnity.

So look at Monster Indian (1968) by Fritz Scholder.

Here we see a pop pastel palette reminiscent of, say, Ed Ruscha, and a heavy Francis Bacon flutter-and-wow influence. This isn't a solemn mystic or a stoic victim -- this isn't Kaw-Liga or Tonto. And no monster, either: the subject, befeathered with a bone breast plate, looks beseechingly vulnerable.

Scholder, who was born in 1937, is one of the more familiar names in this exhibit, and probably the most essential one. Or, as Coyote, a character in an imaginary play by academic Norman K. Denzin called The Traveling Indian Medicine Show (which exists in Denzin's intimidatingly titled 2013 book Indians on Display: Global Commodification of Native America in Performance, Art and Museums), called him: "... the one and only. The King. The man who helped rewrite how Native Americans have been painted by whites. The painter who painted Indians drinking Coors beer. The painter who painted drunk Indians in the back of worn-out cars. The painter who wrapped Indians in the American flag. An Indian Andy Warhol who painted flags, cats and beer cans. The painter who gave us white Indians and Indian vampires."

Scholder was also a painter who swore -- at least twice -- to never paint Indians, and who often insisted he was Not Indian.

He could pass as such, with his German name and German paternal grandfather. But his paternal grandmother was a Luiseno, a member of a California Mission tribe. His father worked as a school administrator for the Bureau of Indian Affairs and housed his family on a string of Indian School campuses across the Northern Plains -- rural towns in Minnesota and the Dakotas.

Scholder's father was what in those days they matter-of-factly called a "half-breed." He was a product of those Indian schools and, Scholder told his biographer Paul Chaat Smith, deeply ashamed of that. So he made sure Fritz and his sisters attended public schools. American schools.

"There were no Indian objects in the house. We never thought of ourselves as Indians," Scholder told Smith. " ... When my parents were married they were given beautiful Indian baskets, rugs and pottery, but in a couple of years my father threw them all away. I grew up with not one Indian object in the house, except for a pot my father gave me for my crayons."

Years later, as an adult, Scholder would realize that jet black pot was made by Maria Martinez, an internationally renowned potter from the San Ildefonso Pueblo near Santa Fe.

But Scholder wasn't an Indian. Indians lived on reservations and went to Indian schools. While Scholder and his sisters occasionally visited Luiseno relatives in Southern California -- their parents had been married in a horseback ceremony on the Hopi reservation in Arizona -- they had overcome the gravity of heritage. This was common thinking in the 1950s, when only a traditionalist minority was talking about curating the old practices and beliefs. For both immigrant and indigenous populations, the goal was assimilation.

Scholder was something of a prodigy, winning competitions as a grade-schooler, hailed as a future force by local newspapers while in his teens. He attended high school in Pierre, S.D., for a while, where his art teacher was Oscar Howe, a Yanktonai Dakota, who was drafted and fought in North Africa, Italy and Germany during World War II.

Howe's watercolor Dance of the Heyoka (finished while Scholder was his pupil), is one of the oldest works featured in the Crystal Bridges exhibit, and it can be taken as evidence of Howe's interests beyond the conventions of Indian painting. While it depicts a traditional subject, the modernist treatment evokes Willem de Kooning, Henri Matisse and Marc Chagall. In a certain figurative sense, it can also be taken as abstract.

Yet, despite growing up in close proximity to Indians and having been instructed by an Indian, Scholder didn't exhibit any interest in Indians as subjects until he graduated from Sacramento State University, where he studied under pop art progenitor Wayne Thiebauld. He was at that point a promising abstract expressionist deeply engaged in color experiments.

But in 1961, thanks to his one-quarter native heritage and possibly his father's midlife re-engagement with his roots (the old man started exploring his Luiseno past, collecting native songs), he was invited to participate in the Rockefeller Indian Art Project at the University of Arizona. That led to his accepting a teaching position at the Institute of American Indian Arts in Santa Fe in 1964, and a public vow to never paint an Indian.

That lasted until 1967, when he painted his Indian No. 1 -- which he insisted was, like all his paintings, primarily "an experiment in color."

And to look at it another way, Scholder wasn't really painting Indians; he was painting tourists' grotesque images of Indians. Many of his paintings, including Monster Indian, can be seen as indictments of those looking for the embodiment of the TV-driven cliche. In 1972, Scholder wrote a poem to accompany his painting Super Indian No. 2, which depicted a weary Buffalo Dancer after a performance who's about to enjoy an incongruous ice cream cone.

He tried to ignore the hoard [sic]

of ugly tourists as he left the others. In the

old days there were few white

watchers along with the old professional

Indian lovers. Now it had turned

into a carnival. He stepped up to the

Scholder became perhaps the most famous painter of the American Southwest after Georgia O'Keeffe, with a recognizable style that in some ways echoes Francisco de Goya and Paul Gauguin as well as Andy Warhol and other pop artists. He traveled extensively in Europe in the late '60s and early '70s. In 1972, thanks to a grant from the United States Information Agency, he toured Europe with his pupil T.C. Cannon.

Cannon, whose Collector No. 5 most directly states the thesis statement of Art for a New Understanding by depicting an obviously wealthy Indian art collector, dressed in traditional finery, who's sitting in a chair in his house with van Gogh's Wheat Field hanging on the wall behind him. It suggests the universality of art as a connective medium while reproaching the viewer for imagining the collector as a fetish object. Who's being had here?

A Vietnam veteran, Cannon had a remarkable career that was cut short by a car wreck that killed him when he was 31 years old.

There are 40 artists included in the exhibit, more than 80 works of art, ranging from videos of performance art by Spiderwoman Theater, the oldest continually running women's theater company in North America, to some of the shields used in Cannupa Hanska Luger's Mirror Shield Project during the Dakota Access Pipeline protests in 2016 and 2017.

Athena LaTocha's Ozark (Shelter in Place), which occupies about 360 square feet on one of the gallery walls, was finished there just before the exhibit opened. (LaTocha's representational work draws on her experiences exploring bluff shelters in nearby Pea Ridge Military Park.)

There's Jaune Quick-to-See Smith's large mixed media canvas Trade (Gifts for Trading Land With White People) which was made in 1992 to commemorate the 500th anniversary of Christopher Columbus' arrival in North America and wryly comments on the allegorical and apocryphal "bargains" made between natives and settlers. (How could Indians trade away "their" property if the whole idea of real estate -- private ownership of land -- was alien to them?)

Finally, we can't even reprint in the newspaper Canadian Cree artist Kent Monkman's History Is Painted by the Victors (2013), a 6-by-9.5-foot canvas that re-creates and repurposes a painting (Mount Corcoran) by 19th-century Hudson Valley School artist Albert Bierstadt, adding a number of tiny figures in the foreground, including Monkman's alter-ego, Miss Chief, standing at an easel in thigh-high pink boots while surrounded by naked lissome white men -- presumably Gen. Custer and other federal soldiers who fought in the Battle of Little Big Horn.

We're invited to laugh at Miss Chief, a post-modern interloper in a 19th-century mise-en-scene. Are her subjects idling before battle, or removed to some post-slaughter Valhalla?

It's interesting to note that Bierstadt first exhibited Mount Corcoran in 1877, and that he may have been painting it at the very moment that Custer and his men died in battle in June 1876. It's also interesting to know that the Mount Corcoran in Bierstadt's painting wasn't named Mount Corcoran at the time it was painted; Bierstadt first showed the painting as Mountain Lake. It was only after Washington's Corcoran Gallery of Art acquired Frederic Edwin Church's similarly themed Niagara that Bierstadt decided to offer the landscape to the gallery. But first he petitioned the U.S. War Department to name the mountain in the background for banker/art patron William Wilson Corcoran.

Also note that Bierstadt actually painted Mount Corcoran in his New York studio, based on sketches and quick paintings he did on location. He did not faithfully reproduce the scenes he sketched; he added and subtracted elements. And while much is made of the naturalism of such paintings, in truth Bierstadt and other members of the Hudson Valley School relied heavily on a tested formula to produce desired effects. Their colors are sharp and coded; water is blue, mountains are a pale blue-green. Everything is in sharp focus. Squint and you might even make out the twinkling of a nascent Thomas Kinkade somewhere between the rigor and the awe.

Mount Corcoran is no less a fantasy -- and no less a commodity -- than Monkman's Miss Chief is a repurposing of it. We're supposed to smile at both paintings. And maybe to consider who really got where first.

Photo by RORY WAKEMUP
This drone image still was taken by Rory Wakemup for artist Cannupa Hanska Luger’s Mirror Shield Project, which was part of the Dakota Access Pipeline protests in 2016 and 2017. The image is part of the exhibition “Art for a New Understanding: Native Voices 1950s to Now,” organized by Crystal Bridges Museum of American Art. 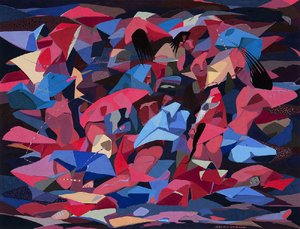 Photo by Oscar Howe Family/Philbrook Museum of Art, Tulsa
Oscar Howe’s modernist Dance of the Heoka, circa 1954, is watercolor on paper. It is featured along- side some 80 works at the exhibition “Art for a New Understanding: Native Voices 1950s to Now,” organized by Crystal Bridges Museum of American Art. 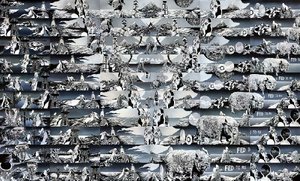 Photo by Bockley Gallery, Minneapolis
This ink and oil on paper is titled Ink Babel and was created by Andrea Carlson. 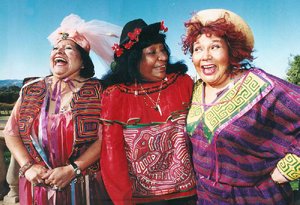 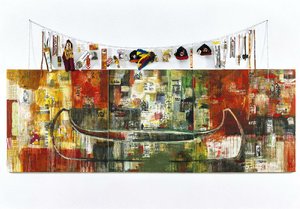 Photo by Chrystler Museum of Art, Norfolk, Va.
Jaune Quick-to-See Smith’s Trade (Gifts for Trading Land With White People) is a wry commentary on the allegorical and apocryphal “bargains” made between natives and settlers. It hangs through Jan. 7 in the current exhibition at Crystal Bridges Museum of American Art.

CORRECTION: The Battle of the Little Big Horn was fought June 25-26, 1876. The date of the battle was incorrect in an earlier version of this column.