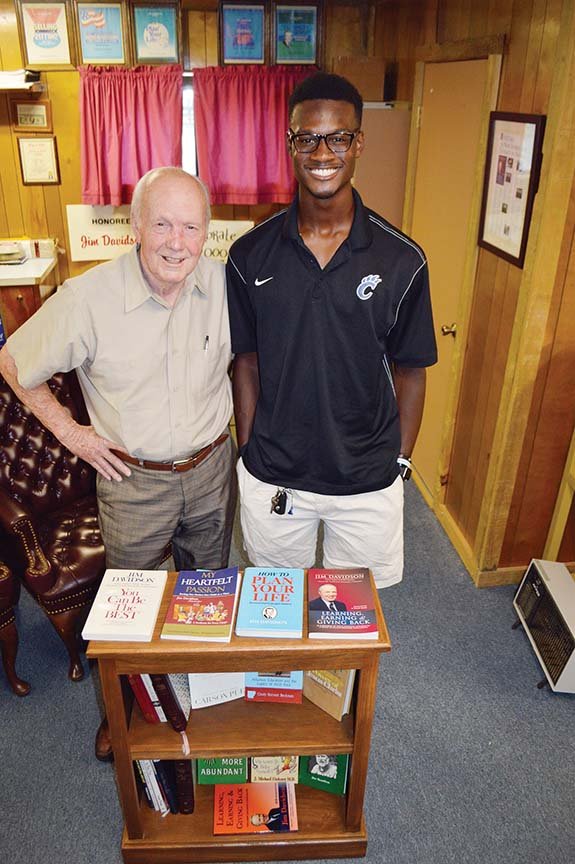 Jim Davidson, left, founder of the Conway Bookcase Project, stands in his home office with JoVoni Johnson, a senior at Conway High School and the recipient of a bookcase like the one shown. JoVoni, a National Merit Semifinalist and quarterback of the football team, said the personalized bookcase and starter set of books he received in Head Start sparked his love of reading. The annual Bookcase for Literacy Banquet, a fundraising event, is scheduled for 6:30 p.m. Thursday in the Bob and Betty Courtway Middle School Cafeteria in Conway.

Conway High School senior JoVoni Johnson’s list of honors grows longer every day, and he traces much of it to a gift he received in Head Start.

The 17-year-old Wampus Cat quarterback, who has a 4.21 grade-point average, was named a National Merit Semifinalist earlier this month. He’s also the student-body president and a member of the Fellowship of Christian Athletes.

He attributes much of his academic success to a love of reading, inspired by the Conway Bookcase Project.

“I think it got it off to a jump start as far as me learning to like to learn,” Johnson said. “You learn to search for knowledge.”

Founded in 2005 by author and nationally syndicated columnist Jim Davidson of Conway, the project is geared toward low-income students. Every 4-year-old Head Start student in cities that have a bookcase project receives a personalized, handmade bookcase with a few new or gently used books and a Bible. To date, about 700 bookcases have been given away in Conway, Davidson said. The project is under the umbrella of the all-volunteer Bookcase for Every Child organization.

Johnson said he remembers getting the bookcase.

“I think we went to a church, and we had the presentation for it, and I remember me thinking it was a big deal,” Johnson said. “My mom dressed me up for it.”

Johnson is the youngest of three children. His mother, Markiba Johnson, is a single parent.

He said that in his home, he still has the bookcase, which has his name engraved on a gold plaque affixed to the bookcase.

“When you have a bookcase, you have an incentive to read and fill it with books.”

That’s exactly what Davidson hoped would happen when he launched the project.

The 11th annual Bookcase for Literacy Banquet, hosted by the Conway Bookcase Project Committee, is scheduled for 6:30 p.m. Thursday in the Bob and Betty Courtway Middle School cafeteria in Conway. The Sulphur Road Pickers will provide entertainment. Tickets are $15.95 each or $125 for a table of eight. Dinner will be catfish and all the trimmings, as well as homemade desserts. Each ticket comes with a copy of Davidson’s revised edition of Learning, Earning & Giving Back.

Miss Metro Taryn Bewley of Conway, a student at Ouachita Baptist University in Arkadelphia, plans to attend the banquet and to start a bookcase project in Arkadelphia, Davidson said.

Tickets are available at Conway Copies, Pickles Gap Village, the Faulkner County Library and the Log Cabin Democrat, or by calling Davidson at (501) 499-2179. More information is available at bookcaseforeverychild.com.

Davidson said the bookcases were made by a group of men at Woodland Heights Baptist Church. Today, a Conway homebuilder has taken over the project, utilizing a computerized saw, and the Conway Bookcase Project pays for the materials.

In April, 50 more bookcases will be presented to Conway Head Start students, bringing the total number given away to about 750.

One Child at a Time

Sandy Aguirre, early-childhood director for seven counties, including Faulkner and Cleburne, said her son, Alexander, received one of the bookcases when he was a Head Start student.

“I started as a parent. My son is 16 years old, and he was one of the first group of recipients,” Aguirre said. “He still has [the bookcase]. Back then, we had just moved here, so I moved in with family members, and we were considered homeless. … Even though I was born and raised here, I got married at a very young age. My priority was not buying books.

“We would add books to that bookcase every year.”

Aguirre said most Head Start parents are in the same situation — working to provide basic necessities for their children.

“They understand the importance of reading, and we have a lending library,” she said, but they don’t have extra money to buy books. “They see the importance of them, but at least we give [the children] a start before they leave our program.”

Former Conway Police Chief Randall Aragon helped Davidson get the project off the ground and later started a bookcase project in Fairbanks, Alaska. Bookcase projects also exist in nine communities in six states, including Greenbrier, Mayflower and Wynne in Arkansas.

Davidson has written four books, including My Heartfelt Passion: Saving Our Nation One Child at a Time, which tells the story of the bookcase project.

It’s Davidson’s passion to reach every child he can and spark a love of reading.

“We could make a difference in the literacy of America,” he said, emphatically.

Davidson knows the stark statistics: “Sixty-one percent of third-graders in Arkansas are not reading at grade level,” he said. “If they’re not reading by third grade, the chances of them dropping out are exponential.”

Johnson said he loves to read because unlike movies, with books, he gets to imagine the characters and not have someone else’s idea of what they are like.

“We have a real success story going,” Davidson said of the project.

Johnson is being recruited by several colleges to play football, but he has aspirations beyond athletics. He wants to major in economics and minor in history.

“After I graduate with a master’s, I want to take the LSAT and go to law school,” he said. “I like to debate. I don’t want to argue social cases. I’d rather be more like a corporate [attorney].”

Johnson said he spoke at a Bookcase for Literacy

Banquet a couple of years ago to inspire the children.

“About a year or two ago, I went back to the [Faulkner County] Library, and I got to talk to all the kids and parents about my experience,” he said, “just kind of keeping them a little bit entertained while I talked and told them how fun reading can be and how far it can take you

Johnson is a perfect example, Davidson said, but not the only one.