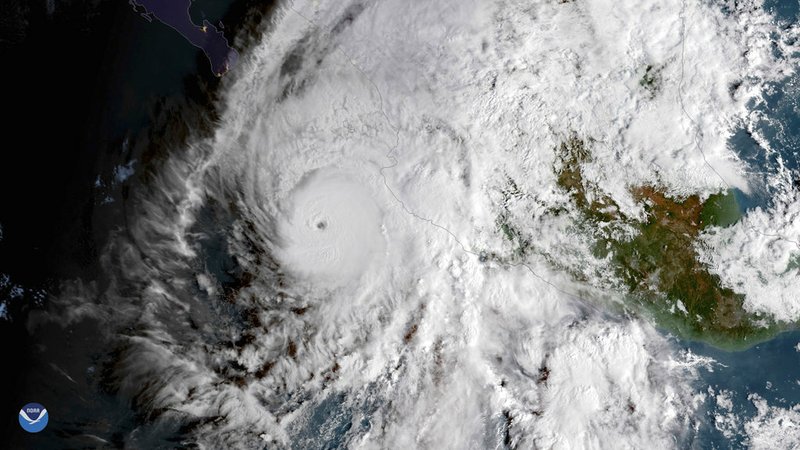 This GOES East satellite image provided by NOAA shows Hurricane Willa in the eastern Pacific, on a path toward Mexico's Pacific coast on Monday, Oct. 22, 2018. (NOAA via AP)

After briefly reaching Category 5 strength, the storm's maximum sustained winds weakened slightly to Category 4 at midafternoon. But it remained "extremely dangerous" and was expected to bring "life-threatening storm surge, wind and rainfall" to parts of west-central and southwestern Mexico ahead of an expected Tuesday landfall, the U.S. National Hurricane Center said.

Hotel workers started taping up windows, and officials began evacuating thousands of people and shuttered schools in a low-lying landscape where towns sit amid farmland tucked between the sea and lagoons. A decree of "extraordinary emergency" was issued for 19 municipalities in Nayarit and Sinaloa states, the federal Interior Department announced.

The hurricane was expected to pass over or near the Islas Marias — a set of islands about 60 miles offshore that include a nature preserve and a federal prison — early Tuesday.

Forecasters said Willa would then blow ashore in the afternoon or evening somewhere along a 140-mile stretch extending from the resort town of Mazatlan to San Blas.

It was projected to weaken somewhat before hitting land but was still expected to be extremely dangerous.

Yamile Bustamante, assistant general manager at the Crown Plaza de Mazatlan, said hotel executives were not ruling out the possibility of evacuating guests but were awaiting instructions from authorities.

Enrique Moreno, mayor of Escuinapa, a municipality of about 60,000 people on Willa's track, said officials were trying to evacuate everybody in the seaside village of Teacapan. He estimated 3,000 were affected but he expected some would try to stay.

"The people don't want to evacuate, but it's for their security," he said.

About 60 miles up the coast in Mazatlan, with a metropolitan-area population of about 500,000, Mayor Jose Joel Boucieguez said officials prepared shelters and were closely monitoring low-lying areas. Mazatlan is a popular vacation spot and home to a large number of American and Canadian expatriates.

At midafternoon, Willa was centered about 110 miles west-southwest of Cabo Corrientes and moving north at 8 mph.

Hurricane-force winds extended 35 miles from the storm's center, and tropical storm-force winds were up to 125 miles out.

The U.S. hurricane center warned that Willa could bring 6 to 12 inches of rain — with up to 18 inches in some places — to parts of Jalisco, Nayarit and Sinaloa states, with flash flooding and landslides possible in mountainous areas.

Farther to the south, Tropical Storm Vicente weakened and was expected to dissipate soon, but still produce heavy rainfall and flooding over parts of southern and southwestern Mexico.