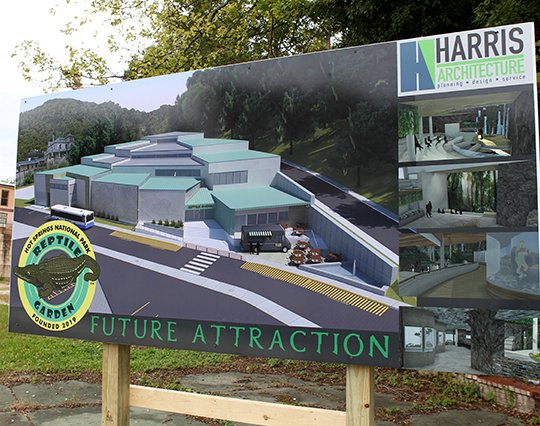 The Sentinel-Record/Richard Rasmussen PROPOSED ATTRACTION: An architect's rendering of Hot Springs National Park Reptile Garden has been erected at the attraction's proposed site on Lodestone Street. This 28,000-square-foot facility will house various reptiles, birds and snakes, according to a news release.

A local company says it is planning to build a reptile garden in Hot Springs' upper downtown area, creating the first new animal attraction in the city in decades.

Last summer, Lodestone Corp., comprised of Dennis and Sarah Magee, purchased property for the attraction at the entrance to Uptown Park Avenue, the company said in a news release. An architect's rendering of the proposed Hot Springs National Park Reptile Garden was erected at the proposed site on Lodestone Street earlier this month.

The 28,000-square-foot reptile garden would house crocodiles, caimans, alligators, lizards, turtles and assorted birds, the release said. It will include a snake house containing common nonvenomous and venomous snakes of Arkansas, along with "examples of the larger and more interesting snakes that are found around the world."

The facility would include a gift shop, the "Boa Bar," and the "Gator Lounge."

"A scientific research library will be made available to teachers and students, but will not be open to the public," the release said.

The attraction is the brainchild of Dennis Magee, the former owner of several downtown businesses and CEO and president of the former Downtown Redevelopment Corp., which managed more than a dozen downtown buildings. Magee made an unsuccessful bid for the Hot Springs Board of Directors in 2016.

The release said Magee is a herpetologist who worked with three major zoos before relocating to Hot Springs more than 30 years ago. Magee said in the release that sharing his love of reptiles played an important role in the attraction becoming a reality.

Magee said in the release that he has received commitments from "key, qualified potential employees" who are "on board" and "excited about the project," including a 25-year retired veteran reptile keeper and herpetologist with the Little Rock Zoo who would serve as curator, and a herpetologist from the United Kingdom who would serve as assistant curator. A retired lawyer and past president of the Arkansas Falconer's Club would present the Birds of Prey program.

Rico Harris, of Harris Architecture, met with city code compliance, engineering and planning and development during the past year to get approval for the project, the release said.

The climate-controlled attraction "will be a family oriented walk-to experience" in the downtown area with a new, large parking facility at the reptile garden's entrance.

Magee said in the release "as with most projects of this magnitude, many pieces have to be in place to make this new family attraction become a reality."

"It takes like-minded individuals and investment teams who are interested in new and exciting experiences to bring tens of thousands of new tourists to Hot Springs each year," he said in the release.