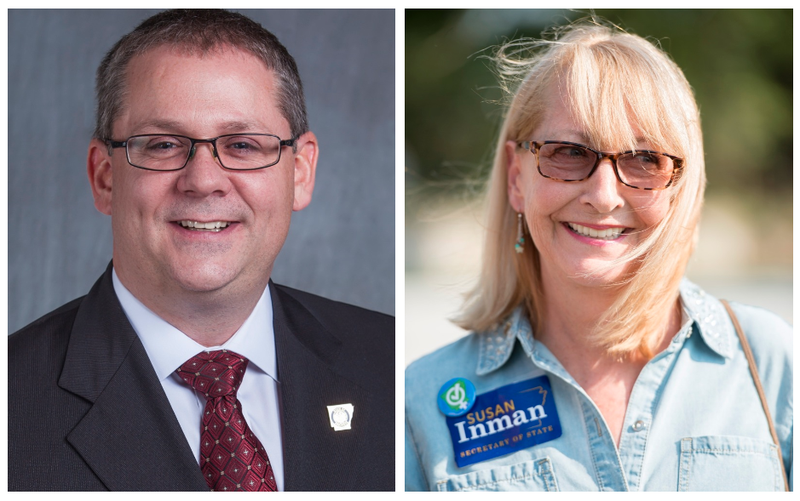 Commissioner of State Lands John Thurston and Susan Inman, who are both running for secretary of state, are shown in these file photos.

An Arkansas county temporarily closed most of its early voting sites after the Democratic nominee for secretary of state was left off the ballot, a glitch the candidate said left her in "sheer disbelief."

An official with the Garland County Election Commission said three of the county's four early voting sites were closed at times Monday because ballots did not include Susan Inman, the Democrat running for secretary of state. The sites have since re-opened.

“I received a text from a friend who went to the early voting poll and said my name wasn’t on the ballot,” Inman said late Monday morning. “Of course I was in sheer disbelief.”

“This should have never happened,” Inman said. “This is an actual failure of election officials to check their materials.”

Commission Executive Secretary Sundra Mallory said before noon that ballots with Inman's name were available at the voting site at the Election Commission Building voting site. Mallory said two other sites also were open: one at the Hancock Fabric Building and another at Faith Fellowship Church. The fourth, LakePointe Church, is also open again, according to KT Anderson, a volunteer at the church.

Inman said that voters who go to the polls and find candidates missing from their ballots should not cast those ballots, but should instead take them back to election officials for correction, verification, or to determine the problem.

Inman is running against Republican John Thurston, who is currently the state's land commissioner. The current secretary of state, Republican Mark Martin, is barred by term limits from seeking re-election.

Reporter Josh Snyder and The Associated Press contributed to this story.