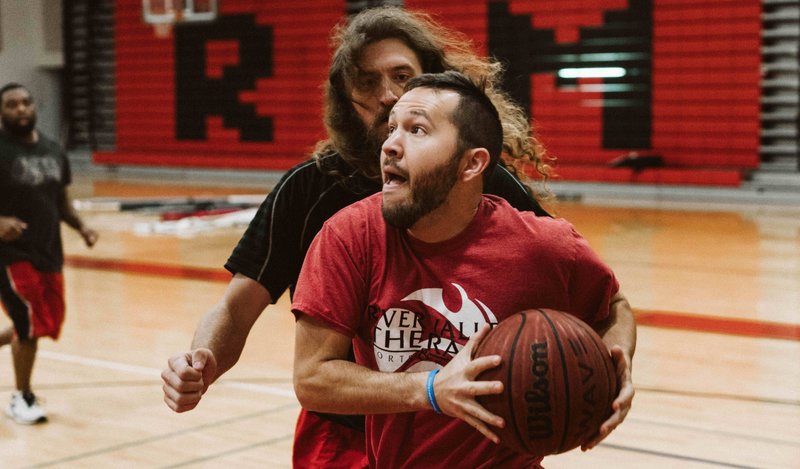 Gabe Harris (front) goes for a layup past guard Ryan Huelle during a pre-dawn pickup basketball game Oct. 1 at Russellville Middle School gym in Russellville. Special to the Democrat-Gazette/HEATH WHORTON

It starts with free throws: Ten men in a single-file line, clanging a ball off a basket.

Notice I said nothing of the net, or the ball going through it — I'm talking about bricked shot after bricked shot, banging against the backboard, rattling the rim, until finally all 10 guys get one to go through.

Now we have teams, and we're almost ready to play five-on-five, full-court basketball in a middle school gym in Russellville.

It's early. A 5:30 a.m. kind of early every Monday, Wednesday and Friday. So we stretch a little. Talk about the Hogs, or how our kids slept the night before.

Finally, one guy checks the ball into another, that guy bounces it back, and we start playing.

It's rough, watching men aged 20 to 60 run around on a basketball court that early in the morning (or any time, for that matter). Some of us played ball in high school. Some never played, period. Over the last two years, we've seen fractured ankles, busted noses, pounds lost, friendships started and, surprisingly, there's still that one guy who can't make a layup (me).

But we all keep coming back. It's like a drug, something men don't get sitting behind a desk or watching television at home, and this "league," it has been around for nearly 30 years, originating about 20 miles up Interstate 40 in Clarksville. 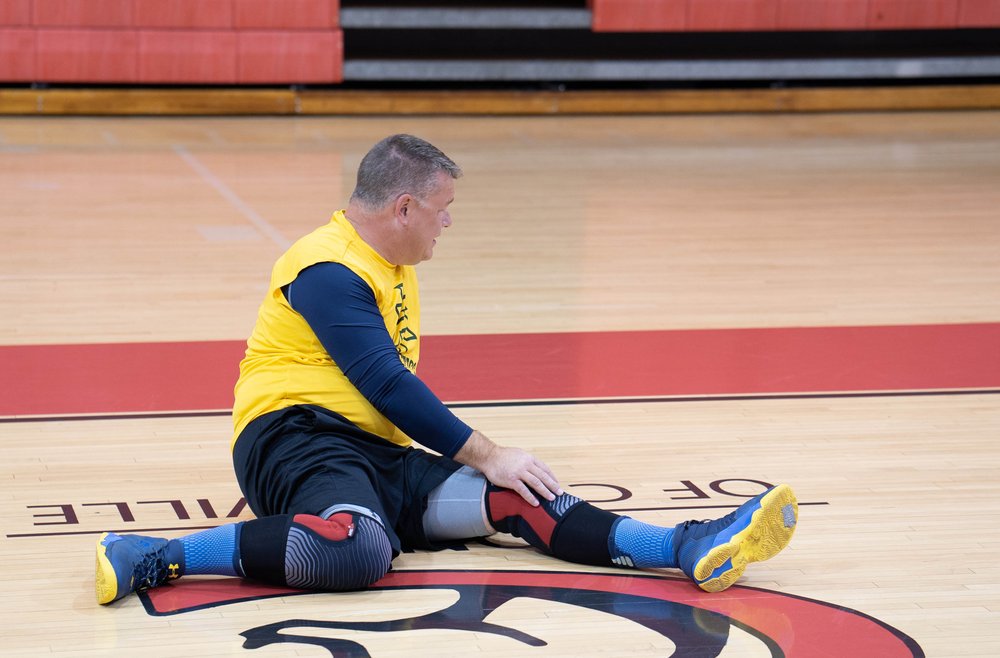 Thomas Pennington, 50, loosens up Oct. 1 at Clarksville High School gym before a pre-dawn pickup game. Special to the Democrat-Gazette/JOSH WILSON

At 26 years old, I was named the head coach of the Clarksville Panthers football team. Needless to say, I was busy, so busy that I'd abandoned any semblance of a fitness regimen. Luckily, Thomas Pennington, a local lawyer and longtime Clarksville resident, invited me to play basketball with his league in the mornings.

Little did I know, the league had been around longer than I'd been alive.

"They'd been getting together for years before I arrived in 1997," says Pennington, who turned 50 this year and continues to play. "I'm old enough now I have to get up at 4:30 a.m. to take Excedrin and my asthma inhaler early enough for them to kick in by the time we play."

For Pennington, the allure of the league goes deeper than just the pure aerobic benefit. He also sees the value of being held accountable.

"If I'm just going jogging by myself in the morning," Pennington says, "I can be very persuasive about all the reasons why I don't need to wake up and exercise. However, if I have nine guys waiting on me, I'm not going to let them down. I'm going to show up."

Over the years, Pennington noticed a common denominator among his fellow players: "The guys who are dedicated to morning basketball tend to do very well in life. Their job, their families, their personal lives, are — without exception — all very squared away."

There's another player who's been balling in Clarksville even longer than Thomas Pennington, as he notes: "One thing that has not changed over the years is Dr. John Dunham's ability to play basketball."

Dunham, a 56-year-old family practice doctor, says the league was already in place before he came along.

He and his family had just moved to Clarksville in 1991, and Dunham was looking for a way to stay in shape. There was a group of doctors who swam at the University of the Ozarks in the mornings. He went along, expecting the swim session to be a breeze, but after a few laps, he nearly drowned in the shallow end. Fortuitously, he looked across the pool to the basketball gym and, well, the rest is history.

"I've been playing for almost 30 years now, and it's such a joy. My wife will tell you, if I don't get to play ball, I'm not as happy," Dunham says. "I don't have to look at medical studies to know that. I need it, not only physically but also mentally. It's a great way to stay sharp."

Sharp is a great word to define "Doc," as he's known on the court. He's wiry and tenacious, as gritty a ballplayer as I've ever seen. But when asked how his style has changed over the years, Doc laughs it off.

"Listen, I graduated from high school in 1980, and back then the coaches told everyone they had to wear a jock," Dunham says. "I wore a jock forever, but then there came a time when I realized, I'm not moving fast enough to wear a jock anymore."

Don't let him fool you, Doc has speed to spare, but still I wondered how many more years he plans to keep playing.

An original member, John Payne, played until he was 58, Dunham says. "So I've got my mind set on two more years."

When my wife and I moved to Russellville, I knew I wanted to start a group just like the one I'd been a part of in Clarksville. A few weeks later, I was able to find a gym, some willing participants, and get everyone running.

We've had our ups and downs, days where only nine guys show up and we're forced to play five-on-four. But mainly, when I think of our current squad in Russellville, it's kind of like the 1999 movie Fight Club. Not because we're always bumping into each other (although we are), but because of how it makes us feel.

In that movie, men gather in basements, wail on each other for a few hours, and then go back to their desk jobs, feeling sore but rejuvenated. You might remember the line: "The first rule of Fight Club is: You don't talk about Fight Club."

The same is true for our morning basketball league. Sometimes we see each other around town, maybe limping between church pews on Sundays, and we'll share a nod, a knowing glance, but that's it — nothing more.

For this story, though, I decided to break that rule.

Heath Whorton is one of our longest-standing members. He's 31, a father to two young boys, and also works at Arkansas Tech as an emergency manager while running his own filmmaking business from home. Needless to say, Heath is busy.

"When I first started playing, I was four years removed from the Marine Corps, where competition was a daily ritual," Whorton says. "Me coming out had more to do with wanting to compete than it did liking basketball.

"During my first morning playing, I was as close to dying as I was during my Marine training," Whorton says. "But now I've been at it over two years, long enough to completely wear out two pairs of basketball shoes, and I wouldn't trade it for anything."

That longing to compete — and the fulfillment Heath found — is just what men need. No, I'm not talking about fantasy football, or eating heaping portions of cheese dip and screaming at the Hogs as they struggle to survive in the SEC. I'm talking the actual thing: sweat and blood, victory and defeat. Men need it.

In a world where more and more of our daily tasks are being done for us, where we're quickly becoming sedentary creatures, and the idea of being a "man" in America is under reconstruction — we need sport.

In Fight Club, the character Tyler Durden says: "Advertising has us chasing cars and clothes, working jobs we hate so we can buy stuff we don't need. We're the middle children of history. No purpose or place. We have no Great War, no Great Depression. Our great war is a spiritual war. Our great depression is our lives."

Josh Wilson, 33, self-employed, and the only player who has ventured to Clarksville and Russellville to play ball in the mornings, echoed that sentiment when asked why he plays.

"There are these times, when the next possession can win the game for either team, and there are no politics, no social issues, it doesn't matter who your family is, or who you know — all that matters is who can make the next shot. And that's a lot of fun." 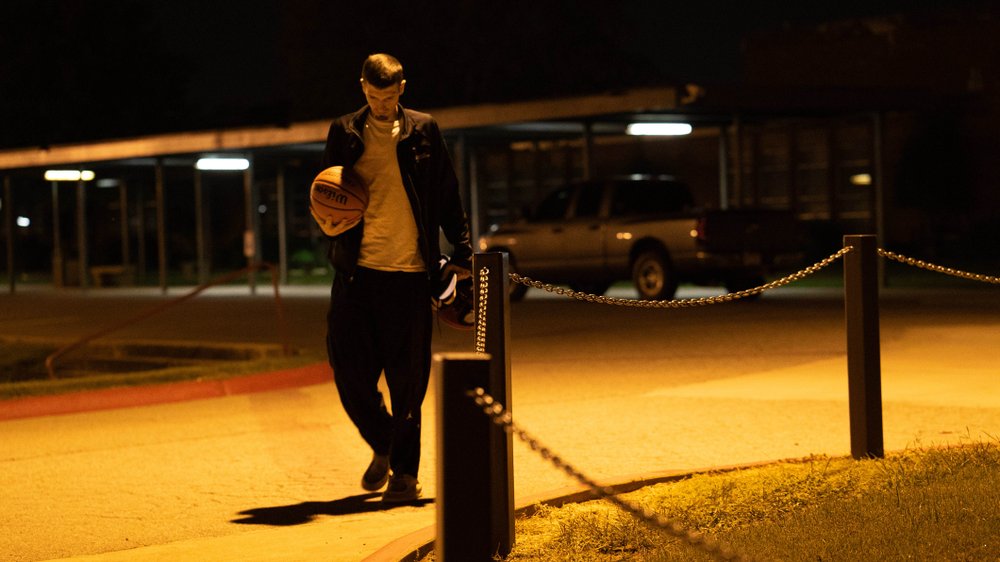 Basketball in hand, Eli Gunn, 34, walks through predawn darkness Oct. 1 to play a pickup game at the Clarksville High School gym with a group of men who have played together since the early 1990s, if not longer. Special to the Democrat-Gazette/JOSH WILSON

Do you feel it? Do you know what Tyler Durden and Josh Wilson are talking about? I think it hides just beneath the surface for all of us. Life has become too easy. "First World Problems" await our every turn. Sometimes I wonder whether deciding between the "Elite" or the "Limited" SUV is truly a problem.

We're stressed to the max over the minutiae of life. We need vacations from our expensive vacations. We've got it good. Too good.

So what's the answer? In a world where lawnmowers are self-propelled and firewood is split hydraulically, how on earth can we find a fight worth fighting? How can we break free of such a sedentary, stare-at-a-screen-until-your-eyes-bleed existence?

I want to follow in the footsteps of a guy like "Doc." I want to wake up in the morning and hustle across the hardwoods, feel my lungs burn, and hold back a smile when I hit the game winner.

I want to play.

Americans, as a whole, are heavily invested in sports. Just look at any college campus, marvel at the Coliseum-size stadiums, the loads of money spent on travel and uniforms and scholarships — Americans love competition. As adults, though, we shouldn't be constrained to the bleachers or the sofa. No! The glorious quarrel of sport should be available to all.

It's October. Football season is in full swing. I'll probably catch a few games, but I can guarantee this: I'll be out on that basketball court in the morning, throwing elbows and bricking layups. Those dudes are my tribe.

Eli Cranor, a former coach and college quarterback, writes from Russellville, Arkansas. He can be reached at elicranor.com.