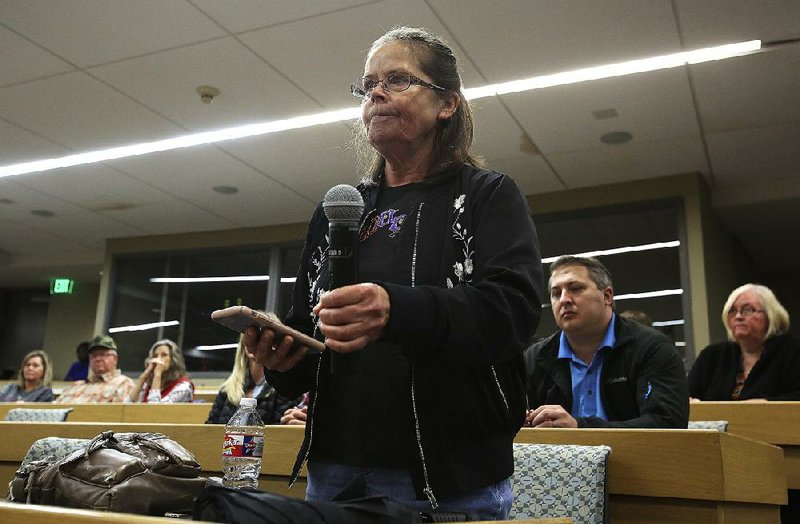 Lorna Knox of Cabot speaks Friday to the Arkansas Medical Marijuana Commission about her wish that the drug would soon be available for patients.

Nearly two years after Arkansans voted to legalize medical marijuana -- but with no dispensaries open to date -- the commission overseeing licensing heard from patients Friday who asked that the drug be made available as soon as possible.

The Arkansas Medical Marijuana Commission took public comments for a little more than an hour Friday in a lecture hall at the University of Arkansas at Little Rock's William H. Bowen School of Law. The commission expected large crowds, but about 50 people showed up. Of those, about half spoke.

"Please make opening the dispensaries a priority in your lives for the patients and the families of patients," said Lorna Knox, an Arkansan who said she spent several years as a medical-marijuana patient in California before returning to Cabot in 2016.

Like Knox, several of the people who spoke at the meeting identified themselves as potential consumers of medical marijuana.

More than 6,300 people have been certified as patients or caregivers by the Department of Health as of Friday. 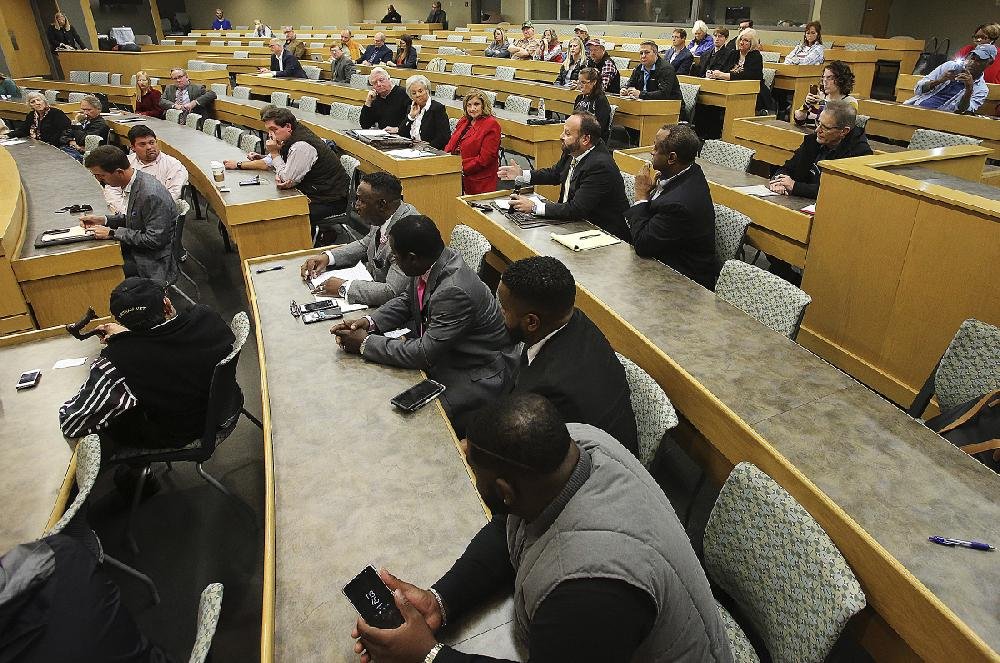 About 50 people turned up for a session at the University of Arkansas at Little Rock during which comments were offered to the Arkansas Medical Marijuana Commission about gaining access to the drug.

Treige Hussey, also of Little Rock, sat a few rows behind Gorter. When the commissioners reached the end of the list of names on a sign-up sheet, Hussey indicated that she wanted to share her perspective on the situation.

"Just waiting and waiting," she said. "I've went to doctors to get help and I just can't seem to get the help that I need."

Officials estimate the drug will be available during the first three months of 2019.

The commission was established after voters passed Amendment 98 to the state constitution in November 2016. The commission's purpose was to evaluate and award the licenses for the cultivators and dispensaries that would get the new industry up and running, but that process so far has been hindered by delays and lawsuits over the commission's scoring and purported conflicts of interest.

Others speaking Friday were unsuccessful applicants for one of the state's five coveted cultivation licenses. They asked if the commission would agree to take a second look. Some simply expressed frustration with the process.

"We felt that the application process was going to be fair. There's been so many things to make us feel that it is not," said Loretta Lever, who identified herself as a member of a cultivator group.

Storm Nolan, president of the Arkansas Cannabis Industry Association, challenged the commissioners to say out loud during the meeting whether they had read any of around 15 formal complaints sent to them since the scoring of the cultivation centers was completed in February.

Other speakers said they had submitted complaints to the commission about the definitions the commissioners had used to consider minority status in applicants -- definitions that were based on state law -- by including disabled veterans in that group.

Leticia Sanders, who ran in the Democratic primary for governor this spring, showed up to speak.

Commissioner Travis Story said afterward that he took the comments "to heart," and that the commission was moving "as fast as we can" to get through the final process of awarding dispensary licenses.

The commissioners graded the cultivation licenses themselves, but decided to hire outside help to recommend which companies should receive dispensary licenses. Medical marijuana sold in state will have to be grown and processed here under the law.

The other three commissioners at the meeting declined to speak to reporters afterward.

One commissioner, Dr. Carlos Roman, did not attend the public comment period Friday. He also missed the last meeting.

Earlier this month, the Arkansas Democrat-Gazette reported on a video of a conversation between an applicant and Roman. The video had fueled bribery accusations and led to an FBI investigation. Both the applicant and Roman denied wrongdoing.

A spokesman for the Department of Finance and Administration, which provides administrative support to the commission, said Roman never notified anyone in the agency that he wasn't planning to attend Friday.

Scott Hardin, a spokesman for the finance department, said the agency over the weekend would be sending 198 applications for a dispensary license to the Public Consulting Group of Boston, which will grade the applications.

That process will start Monday, Hardin said, allowing for the winners to be announced in late November or early December.

If all goes according to plan, Hardin said medical marijuana will be available for sale to patients in the first quarter of 2019.

"We certainly understand the frustrations, but we're getting close," Hardin said.