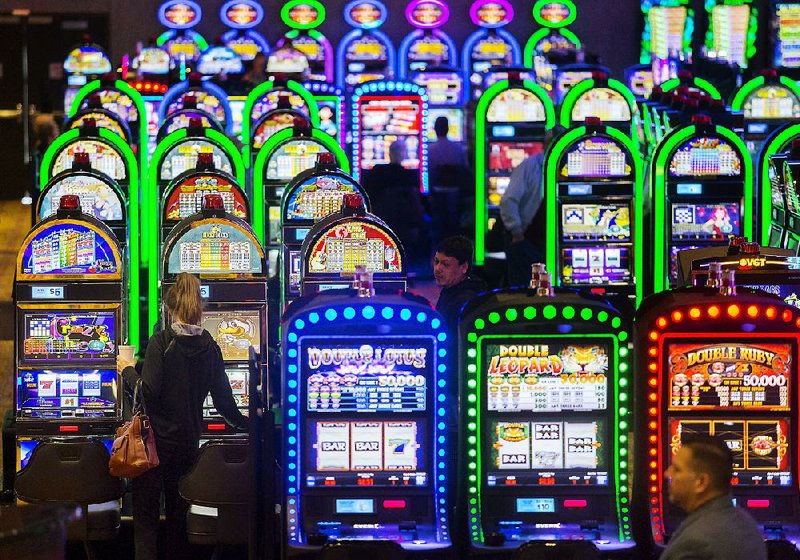 Gamblers check out the casino floor during opening day at the Cherokee Casino in Grove, Okla., in January 2017. Tribal casino revenue in Oklahoma in 2016 was $4.4 billion, according to an industry report.

For the first time in 18 years, Arkansans are casting ballots on a proposed constitutional amendment that would authorize full-fledged casinos in the state.

Leading supporters and foes say they're not banking on either side winning yet.

If approved by voters, Issue 4 would authorize the Arkansas Racing Commission to approve licenses for four full-fledged casinos, including licenses for expanded operations for Oaklawn Jockey Club in Hot Springs and for Southland Racing Corp. in West Memphis, and allow for sports betting. Under a state law enacted in 2005, Oaklawn and Southland operate electronic games of skill.

Besides Garland and Crittenden counties, the proposal would allow casinos in Jefferson and Pope counties.

One voter summed up why she supported the idea.

She said she saw no reason to vote against the proposal.

"People in Arkansas can go right across the border and spend their money in Mississippi [casinos], and might as well have them spend it here," Worley said Monday after she left an early voting site in downtown Little Rock.

Worley's rationale for supporting Issue 4 echoes the advertisements for it that were financed by the proposal's sponsor, the Arkansas Driving Forward committee.

Southland is backing the proposed constitutional amendment, while Oaklawn isn't taking a position and has repeatedly declined to comment beyond that, according to their officials.

"If the measure is approved by voters, we plan to make a substantial investment to further enhance Southland as a full-fledged casino and premier gaming and entertainment destination, which we estimate would create 250 additional jobs, as well as boost construction jobs and allow us to increase our already significant contributions to the regional economy," said Glen White, a spokesman for Southland's parent company, Delaware North.

Meeting in Jonesboro on Wednesday, several hundred people attending the Arkansas State Baptist Convention approved a resolution urging votes against Issue 4, "denying the gambling industry the opportunity to prey on the weakest, most vulnerable, and most desperate of our fellow Arkansans," according to a copy provided by Page.

Nate Steel, a counsel for Arkansas Driving Forward, said: "There are a number of faith leaders and organizations who disagree entirely.

"They realize, like most Arkansans, that what the 'weakest, most vulnerable, and most desperate' among us need is jobs. Issue 4 creates 6,000 good-paying jobs with benefits and has a $5.8 Billion [economic impact] over the next 10 years according to the Arkansas Economic Development Institute at UALR," he said in a written statement.

For his part, House Speaker Matthew Shepherd, R-El Dorado, said he hasn't decided how he'll vote on it.

"Generally I would be opposed to that," he said last week.

"However, in this instance, this particular proposal I know is something that southeast Arkansas is very interested in, particularly Jefferson County and Pine Bluff, so that's the kind of thing that I am weighing in my mind right now," Shepherd said.

The Quapaw tribe has expressed interest in applying for a casino license in Jefferson County, while the Cherokee Nation has indicated its interest in a casino in Pope County.

Quapaw tribe chairman John Berrey said in an interview that the tribe views Jefferson County as "our homeland," and "we have created a great relationship with local officials." If the tribe is awarded a casino license, he said he envisions investing at least $200 million in a destination resort that would create at least 1,000 full-time jobs in Jefferson County.

Issue 4 requires applicants to get support from local officials.

Jefferson County Sheriff Gerald Robinson, who is running unopposed for county judge in the general election, said he would welcome a casino because it would create jobs and be "a shot in the arm" for the state. Many people in the state travel to surrounding states to gamble in their casinos, he said.

Pine Bluff Mayor Shirley Washington could not be reached for comment by telephone last week.

The Pine Bluff Regional Chamber of Commerce supports Issue 4 because voter approval of the measure "will mean economic growth for our community area" and "tax revenue from the casino will also provide city and county governments with funding for programs at a time when budget restraints are restricting growth and affecting services," the chamber's Issues & Legislation Committee chairman, Duke Fakouri, said in a written statement.

But Rep. Vivian Flowers, D-Pine Bluff, said she opposes Issue 4 because its proposed net casino gambling receipts on the first $150 million is 13 percent, below the national average of 25 percent. She also dislikes that it would provide only $200,000 for problem-gambling programs.

"Rep. Flowers is clearly mistaken," Steel said in a written statement. "The proposed tax rate is well above the national average. It starts at 13% and escalates to 20% on net gaming receipts over $150 Million .... The $200,000 for problem gambling is intended as a minimum to replace the funding that the legislature cut in 2015."

In the Nov. 6 general election, Pope County voters will also decide the fate of a proposed ordinance that would require the county judge or the county quorum court to hold a local election to get permission from voters before the officials support a casino.

Cherokee Nation Businesses Chief Executive Officer Shawn Slaton said, "If the people of Arkansas choose to amend their constitution and allow gaming, and if Pope County residents agree that gaming will bring economic development and additional jobs to the area, we'd be very enthusiastic about pursuing a presence there.

"The decision ultimately lies in the will of the people of Arkansas," Slaton said in a written statement.

A minimum investment of $100 million would be required for a casino if Issue 4 passes and Pope County voters approve the casino, said Chuck Garrett, executive vice president of Cherokee Nation Businesses. If Cherokee Nation Entertainment is awarded a gambling license, "we are committed to that investment, but would work with Pope County to determine their needs, desires and concerns before building a venue appropriate for that market," he said in a written statement.

Russellville Mayor Randy Horton, who is seeking re-election Nov. 6, declined to say how he is going to vote on Issue 4.

"It is a citizens-led initiative, and I am going to allow people their right to vote," he said.

The department attributed the projected drop to two factors: Oaklawn and Southland would be taxed at a lower rate, and the agency assumed that new casinos around Pine Bluff and Russellville wouldn't open until fiscal 2022.

But Alex Gray, counsel for the Driving Arkansas Forward committee, countered this summer that the projections are flawed because they don't factor in growth of Oaklawn and Southland as full-fledged casinos and wrongly assume that it would take two years rather than one year to open the other casinos.

Net receipts are total receipts minus winnings paid to or reserved for customers.

Gray projected that the four casinos in fiscal 2021 would raise state general revenue about $66 million, which would be a slight increase over the $64.3 million raised through the electronic games of skills at Oaklawn and Southland in fiscal 2018, which ended June 30.

In August, the finance department projected that Issue 4 would increase tax revenue for the state Racing Commission for purse support for horse and greyhound racing, and for cities and counties in fiscal years 2020-22.

A proposed constitutional amendment authorizing casinos in Arkansas was last on the ballot in 2000.

That proposed amendment would have granted Arkansas Casino Corp. the sole right to put casinos in six counties, establish a statewide lottery and legalize charitable bingo.

In 2006, voters approved Amendment 84 authorizing raffles and bingo games run by charities, religious organizations and other nonprofit groups. In 2008, they approved Amendment 87, which authorized the Legislature to create a state lottery to raise money for college scholarships.

In 2009, the Legislature enacted a law to create the Arkansas Scholarship Lottery and the lottery started selling tickets on Sept. 28, 2009. 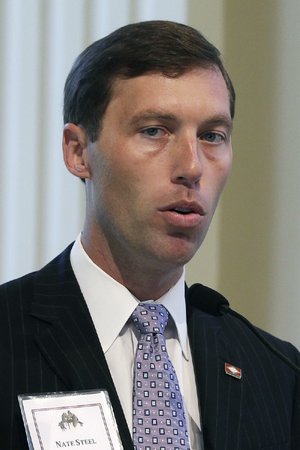 Photo by AP file photo
Nate Steele is shown in this file photo. 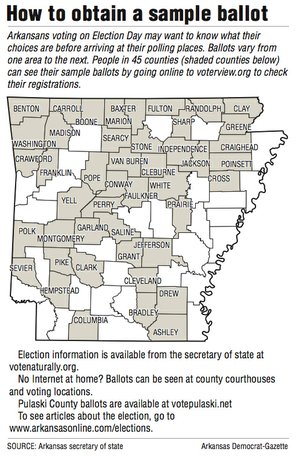 How to obtain a sample ballot 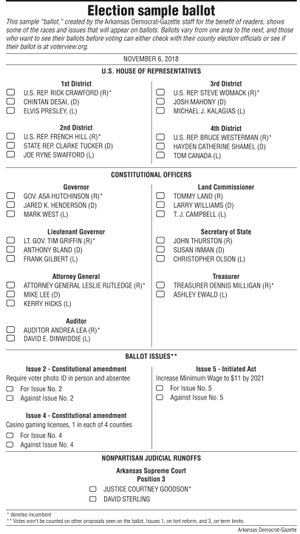 Details of proposed amendment to authorize casino gambling in Arkansas