In a state Senate race in northeast Arkansas, two candidates -- one a Democrat, the other a Republican -- offer the same stance on some key issues often debated at the state Capitol.

Both Epperson and Sturch said in recent interviews that they also support Hutchinson's plan for a $192 million individual income tax cut.

And both said they support a 2017 law allowing concealed-carry permit gun owners with extra training to take their weapons onto college campuses and into other public buildings.

While the May Republican primary in Senate District 19 was in many ways a proxy fight over Hutchinson's agenda, the general election pits one of the state's youngest lawmakers against a longtime teacher who expressed frustration with the state's education system.

Senate District 19 covers all of Independence, Izard and Sharp counties as well as parts of Fulton and Randolph counties. Both candidates are from Batesville, the largest city in the district.

Epperson, who is making her first bid for public office, suggested in a recent interview that she was more conservative than her Republican opponent.

She touted bona fides such as gun ownership and "pro-life" beliefs. But, as an educator for 16 years, she said she'd entered the race out of a concern for the state's education system -- and a desire to toss the state's current method for evaluating teachers.

"We're 42nd in the nation in education," Epperson said, referring to a ranking done by U.S. News and World Report. "That's just not good enough."

Epperson said bad teachers were at the center of the state's low ranking.

"No one will talk about teacher dismissal," she said, adding that the Teacher Excellence and Support System had saddled teachers with extra paperwork to complete their evaluations.

She said she wanted to get rid of the system, which was implemented statewide through a contract with the Department of Education in 2014. She added that she wants to "revamp" the state's Teacher Fair Dismissal Act.

"All [the Teacher Excellence and Support System] did was punish my good teachers," said Epperson, who was most recently a elementary school principal and grant writer in the Cedar Ridge School District. "The bad teachers, it didn't make them any better."

A legislative audit of the Cedar Ridge School District in 2017 found discrepancies in the documents supporting grant applications for the district, though the audit was unable to determine who was responsible. Asked about the report, Epperson said auditors failed to question her before releasing it. She said it was being used to "smear" her.

She said she left the district in the summer of 2017 as part of a planned career change to start her own education consulting business.

Sturch, who serves on the House Education Committee, said the Teacher Excellence and Support System was imperfect, but pointed to recent changes -- including one revision that would decrease the frequency at which teachers with more than three years of experience would undergo evaluations -- to say that the system had improved.

"Everyone wants to reinvent the wheel every three years," Sturch said. "Letting people get used to it and letting people give feedback on where we might need to improve it is where we need to go."

Sturch said his education priorities were in vocational training, pointing to a program at the University of Arkansas Community College at Batesville that allows high school students to take discounted classes at the college to earn technical degrees.

Sturch said he wanted to expand the program to more colleges in the state, and Epperson agreed. "I think that's a great program," she said.

Epperson accused Sturch of refusing to debate her and having higher ambitions than the Arkansas Senate.

She said that when she challenged Sturch's vote in support of a resolution to place Issue 1 on the November ballot, Sturch blocked her on social media. Issue 1 was a proposed constitutional amendment that would have, among other things, limited lawsuit damages and attorneys' fees.

Social conservative groups, including the Family Council, have opposed the kinds of limits on damages included in Issue 1, saying they put a price on life in wrongful-death cases.

Epperson said she felt similarly, saying "pro-life does not just mean anti-abortion; it means a lot more to me than that."

Sturch said his campaign's social media is managed by consultants, and he didn't recall blocking Epperson. He also said he only voted for the resolution to give Arkansans a chance to decide Issue 1.

But the amendment was ruled unconstitutionally broad and struck from the ballot by the Arkansas Supreme Court earlier this month, and no votes will be counted. Sturch said he was still deciding how to vote on the measure when the court issued its decision.

Epperson said Sturch saw the state Senate as a "stepping stone," adding, "His goal is to climb the political ladder. My goal is to serve northeast Arkansas."

Sturch declined to guess at his future employment. However, he offered a response saying he felt that ambition was often encouraged in people in other fields, yet used as a criticism for people in public service.

"I have a proven record of getting things done in the Legislature," said Sturch, pointing to his legislative record in 2017, when 12 of the 18 bills for which he served as a primary sponsor became law.

Both Sturch and Epperson are married. Epperson has two sons, in middle school and college, while Sturch and his wife have no children. 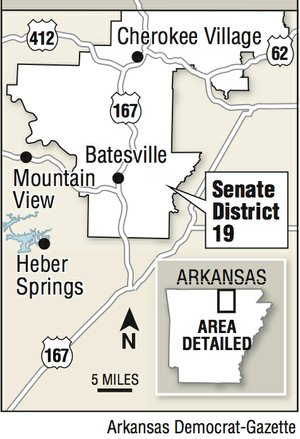