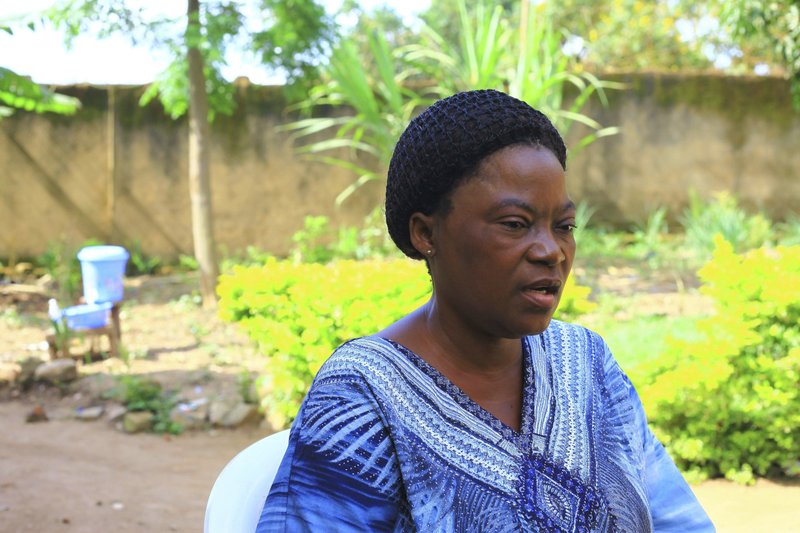 In this photo taken Sunday Aug. 26, 2018, Leoni Kahumbu, mother of Pascaline, a 15-year-old who was infected with Ebola and survived speaks to journalists, in Beni, Democratic Republic of Congo. Pascaline was among the first people given mAb114, one of five experimental treatments approved for use in Congo's latest Ebola outbreak. Now she and other survivors must now deal with the emotional toll of returning to nervous communities where they could be shunned. (AP Photo/Al-hadji Kudra Maliro)

"She did not even have the strength to get up ... I called an ambulance," Kahumbu said.

Experts came to their home the next day to disinfect the house. The 48-year-old and her three other children were isolated but have not come down with the often deadly virus.

Pascaline survived. She was among the first people given mAb114, one of five experimental treatments approved for use in Congo's latest Ebola outbreak.

Now she and other survivors must deal with the emotional toll of returning to nervous communities where they could be shunned.

This is the first time an Ebola outbreak has occurred in Congo's North Kivu and Ituri provinces, densely populated areas with an estimated 1 million people displaced by numerous armed groups fighting over rich natural resources. Ninety cases have been confirmed as Ebola, including 48 deaths.

Health officials face the challenge not only of combating a deadly virus in what is effectively a war zone but also of pushing back against possible stigma and fears of the unknown.

"Although I was negative for Ebola, all of my friends are scared of me," said Leoni, who tested negative for Ebola and came home to find all of the family's belongings destroyed to stop the virus from spreading. "I spend all day inside watching TV, and if I leave there are whispers and fingers pointing to me as the parent of a child who suffers Ebola."

Psychologists visit the family at least twice a day, helping them adapt.

The family lives in a neighborhood of Beni city, the region's largest urban area. Some other survivors are from far smaller communities that information can take longer to reach.

Last week, the Catholic bishop of the local Butembo-Beni diocese made a point of being vaccinated in Mangina village, where the outbreak was identified, to encourage others at risk to present themselves to health officials, Congo's health ministry said. Traditional healers were trained in Ebola prevention.

The ministry also put out a notice against a rumor circulating on social media that said eating onions would guard against Ebola. "It's UNTRUE!" the ministry said. "Apart from giving you bad breath that might keep people away from you, onions have no protective effect."

More worrying is the local resistance to health workers who are trying to promote safe burials, which are crucial to containing the outbreak as the Ebola virus is spread via bodily fluids of those infected, including the dead.

"We are experiencing fear and anger in some communities against Red Cross teams who come to bury the deceased," Dr. Balla Conde, head of emergency operations with the International Federation of Red Cross and Red Crescent Societies, said in a statement.

Leoni and her daughter Pascaline also illustrate another trend in this Ebola outbreak, one which health officials have not been able to explain.

The majority of confirmed and probable Ebola cases in this outbreak are women and children, the highest percentage of any of Congo's 10 outbreaks since the virus was first identified in 1976.

About one-quarter of the group is under 19 years old, said spokesman Yves Willemot with the U.N. children's agency. It's too early to say why children and women are the most affected, he added.

The hospital in Mangina village has been at the epicenter "and normally you get more women and children visiting health centers," Willemot said. Additionally, "more health workers there are female than male."

Dr. Gianfranco Rotigliano, UNICEF's representative in Congo, offered another possible reason: "Women are the primary caregivers for children, so if they are infected with the disease there is a greater risk that children and families become vulnerable."

As health workers try to contain this outbreak, more than 5,400 people have been vaccinated so far, according to Congo's health ministry.

Already more than 60 children have been orphaned or left unaccompanied as parents are kept in Ebola treatment centers. "Some children have lost large parts of their families and become isolated," Rotigliano said.

In an effort at normalcy for children across the region, the school year will start today as scheduled, but the young students will find a new subject on the agenda.

Hand-washing with chlorinated water will be made available at the entrances of 250 schools, and teachers will be newly instructed in Ebola and how to stay safe.