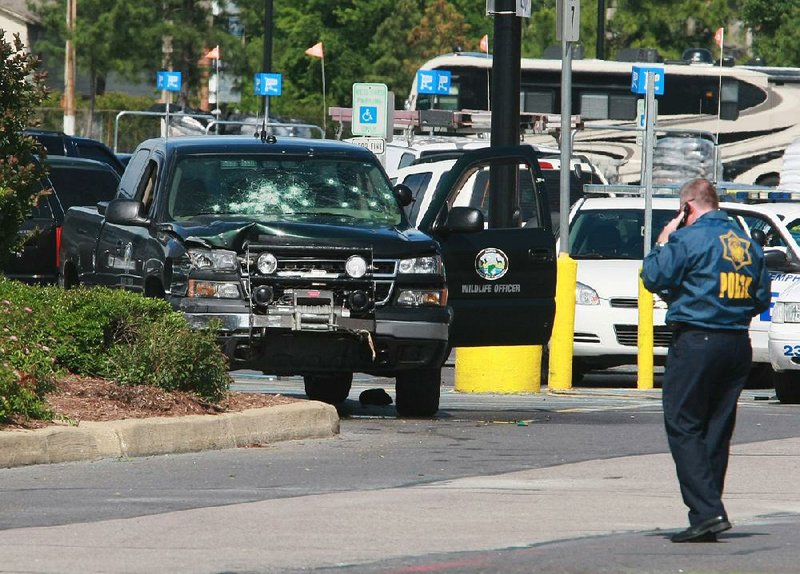 An Arkansas Game and Fish Commission truck was shot up during a gunfight in West Memphis on May 20, 2010.

WASHINGTON -- A bullet-riddled, smashed-up Arkansas Game and Fish Commission truck will be one of the star attractions at the new National Law Enforcement Museum when it opens its doors next month.

The green Chevrolet Silverado 1500 is a testament to the bravery and quick thinking of a wildlife officer who helped end a deadly West Memphis shootout. It's also a reminder of two courageous Arkansans who died in the line of duty.

Under wraps for now, the vehicle will be unveiled in time for the Oct. 13 grand opening, museum spokesman Robyn Small said Aug. 27.

"When it's not covered up, you'd be able to see all the damage. ... Glass shattered, all the bullet holes," she said.

On May 20, 2010, game warden Michael K. Neal rushed from Moro after two West Memphis lawmen were shot during a traffic stop along Interstate 40.

West Memphis police Sgt. Brandon Paudert, shot with an AK-47, died at the scene. Officer Bill Evans, who had initiated the stop, was declared dead minutes later at an area hospital.

The teenaged gunman, Joseph Kane, escaped, along with his 45-year-old father, Jerry Kane Jr. But their white Plymouth Voyager was eventually spotted outside the city's Walmart Supercenter.

With Busby and Wren gravely wounded, bullets flying and shoppers diving for cover, Neal slammed on his accelerator and drove straight toward the Kanes, smashing into the driver's side of the vehicle.

A police car's dashboard camera recorded the attack on Paudert and Evans. Walmart security cameras captured the final shootout, which ended with the gunmen's deaths.

Thanks to television news and the Internet, the images quickly spread around the globe.

Soon thereafter, museum officials asked the state agency if they could have the truck. Game and Fish Commission officials readily agreed.

The vehicle, by that point, was no longer roadworthy, agency spokesman Keith Stephens said.

"It was shot up pretty bad. ... It was beyond fixing. It was totaled," he said. "It probably would've been sold for scrap."

Instead, the agency sent it to Washington, D.C., on a flatbed truck.

"We understood right away that this was something that needed to be memorialized," he said. "Hopefully it never happens again, but I think it was kind of a testament to our officers' training and their ability to react in a manner that probably saved some lives."

The names of the two fallen officers are engraved on the National Law Enforcement Officers Memorial across the street from the new museum.

There likely would've been other victims were it not for Neal's actions, Stephens said.

"I think that he actually saved a lot of lives," he said. "There's no telling what would've happened if he hadn't done that."

In 2013, the White House awarded Neal a Medal of Valor, the nation's highest award for public safety officers. President Barack Obama's administration said Neal and the other recipients had displayed "exceptional courage, regardless of personal safety, in the attempt to save or protect human life."

The National Rifle Association was also impressed, naming Neal its 2010 NRA Officer of the Year.

After the truck left Arkansas, it was kept in storage for six or seven years while work on the project progressed. In July, it was transferred from its temporary location in Lorton, Va., to its permanent home in downtown Washington.

The engine, ruined by AK-47 fire, has been removed.

Two forklifts, working in tandem, lifted the truck to the display area where it currently rests. It will tower over most of the other exhibits, including the desk of former FBI Director J. Edgar Hoover.

Neal, who was elected Monroe County sheriff in 2014, will be on hand for next month's opening ceremonies.

The old truck, he says, has held up pretty well.

"It's in really good shape, other than the damage from the shootout and the impact," Neal said.

Arkansas State Police officials estimate the truck was traveling 55 miles per hour when the collision occurred, he said.

Before dying, one of the assailants unleashed 12 rounds of AK-47 fire at Neal's windshield, the former game warden said.

None of them found their mark.

"I wasn't wearing a seatbelt and my airbag never deployed. ... I bounced off the steering wheel, broke the steering wheel but didn't suffer any injuries from the impact," he said. "I took a lot of shrapnel, glass, injuries to my back, face, hands, ears. Blew my eardrum. Had a piece of glass through my eye."

Eight years later, Neal's vision is unimpaired; his hearing, on the other hand, has never recovered.

Still, he considers himself fortunate.

"I had a guardian angel looking out for me; that's for sure," he said.

Neal has been invited to attend next month's opening ceremonies; he looks forward to touring the site, he said.

"I think it's going to be a great museum," he said.