Electric Island: Arkansas Game and Fish to dedicate new nature trail, but you have to take a boat to get there 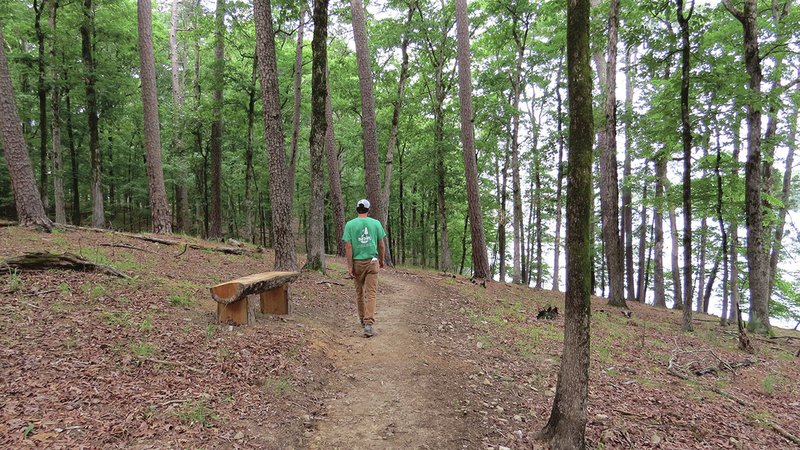 A new trail at Lake Hamilton, accessible by water only, will be dedicated by the Arkansas Game and Fish Commission and The Nature Conservancy of Arkansas this month.

Electric Island Nature Trail will open Sept. 21 with a special float via kayak or motorboat shuttle beginning at 9 a.m. The boat ride will be eight-tenths of a mile and launch from the Andrew H. Hulsey State Fish Hatchery boat ramp for the 10 a.m. dedication followed by a guided 2-mile hike on the island.

For more than three decades, the 118-acre island in the middle of Lake Hamilton has been managed as a nature preserve by The Nature Conservancy. The new trail will enhance opportunities for public hiking, exploring, bird watching, fishing and picnicking, a news release said. 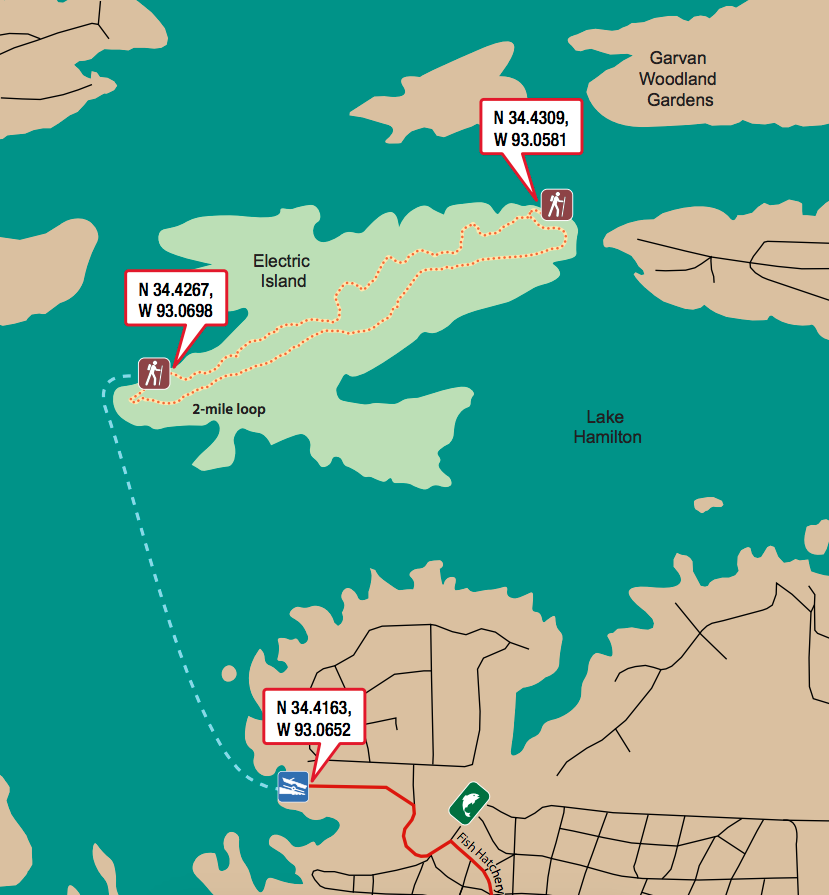 This Arkansas Game and Fish Commission map shows the location of the Electric Island Nature Trail.

Before the land was donated to TNC in 1981, the island belonged to Arkansas Power and Light, which later became Entergy Corp., hence the name Electric Island. It was created in 1931 when the Ouachita River was dammed, creating Lake Hamilton while bringing hydroelectric power to the area.

Kirsten Bartlow, the AGFC's watchable wildlife coordinator, credits wildlife biologist Jake Whisenhunt with the idea of creating a nature trail on the island. AGFC helps manage the island, however hunting and camping are not allowed. "He saw a trail as a way for people to enjoy this public land," Bartlow said in the release.

Whisenhunt said his interest was sparked by people coming to the AGFC's Hot Springs office asking about waterfowl hunting there. That was out of the question because of the strict deed from AP&L to TNC to maintain it as a nongame reserve, but Whisenhunt still wondered what might allow the public to enjoy all the island had to offer.

"It's been in our WMA system since 1984," he said. "The Game and Fish had adopted a management plan [in 1993] that included a trail, but the trail had not been laid out. I read that management plan and brought the idea back up with The Nature Conservancy. It took off this time."

Once TNC was in, Whisenhunt said, "I got with Kirsten. She knew who to contact to get workers out there. She got with The Nature Conservancy point person, Mitchell Allen, and they laid everything out and got it going."

Bartlow describes Electric Island as one of the rare places of solitude amid a lake that's usually bustling with activity and noise.

[RELATED STORY: Island getaway in Arkansas? Here's how campers are making the most of popular lake]

"This lake is a busy place most of the time, but you can sure have some quiet and see the Ouachita woodlands and wildlife right among the hubbub of Lake Hamilton," Bartlow said. "It has gentle topography, which makes it an easy hike for families with kids."

The island has been known for its wildlife, Bartlow added, such as a herd of deer that swims to and from its shore and the shores of Lake Hamilton. Also, depending on the season, visitors might see bald eagles, loons, great horned owls, red-shouldered hawks, waterfowl and other migratory songbirds, in addition to armadillos, box turtles, and ground skinks. "It's neat, all the creatures that are living on the island," Bartlow said.

A 2-mile, natural surface hiking loop has been cleared on the island, thanks to help from work release inmates from the Arkansas Department of Correction Benton unit, Bartlow said in the release. Visitors will find two trailheads on the north side of the island with signs and beaches where boats can tie up. Among the unique spots to explore, Bartlow said, are the remnants of two houses that were on the land before Lake Hamilton was created, with concrete foundations and chimneys still in place.

TNC's Allen and Bartlow laid out the trail, walked it and mapped it. The inmates did the real work and "built the trail the old-fashioned way," Bartlow added, "with hand tools — Kaiser blades, hoes, rakes and saws. They did a really great job. It was a lot of work."

Maps and directions to the island are available online at http://www.agfc.com/electricisland.