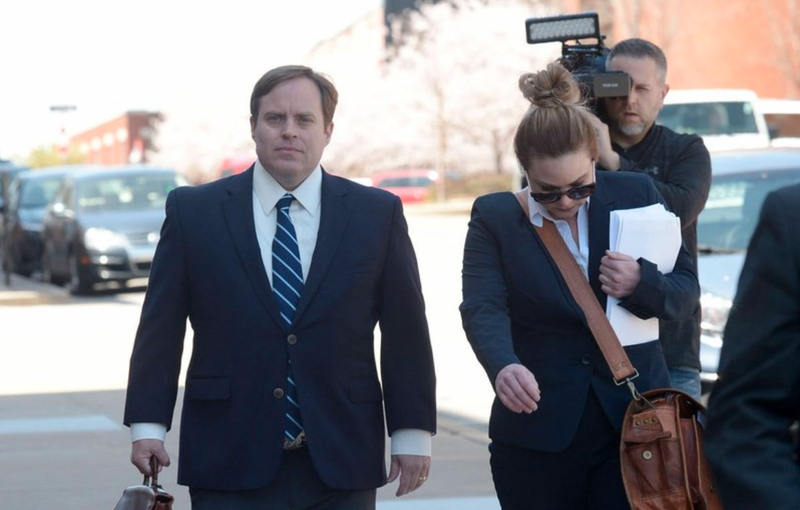 Former Sen. Jon Woods sought a bribe of $10,000 or more to stay out of the way of Jim Hendren's 2012 state Senate bid in the event that redistricting placed the two men in the same district, according to court documents released Friday and a telephone interview with Hendren on Monday.

Hendren's name was redacted in the court documents, but the senator confirmed Monday that he was the one who described the bribe request to federal investigators. Hendren rejected Woods' request, telling him that "he did not do business that way" and leaving the meeting, according to court documents.

"This is a serious allegation which was purportedly made by Mr. Hendren six years ago to a number of people with connections to law enforcement, both state and federal," said Patrick Benca of Little Rock, Woods' attorney. "Nothing was done when the purported allegation was made nor since. Mr. Woods denies the allegation. Mr. Woods is innocent and looks forward to his appeal before the Eighth Circuit Court of Appeals."

Hendren went home after the 2011 meeting, discussed the request with his wife and then called a Benton County deputy prosecutor, he said Monday. The deputy discussed the matter with an FBI agent who told Hendren that a statement would not be enough to prosecute Woods. Hendren would need to draw Woods into another conversation about the offer while wearing a wire, according to the senator's account Monday.

"They didn't ask me to wear a wire," said Hendren, a Republican from Sulphur Springs. "They asked me if I was willing to. I decided not to wear a wire and push it, but to run my race."

The district lines announced that year -- 2011 -- did not put the two candidates in the same Senate district. Woods, a Springdale Republican, defeated incumbent state Sen. Bill Pritchard, R-Elkins, in the 2012 GOP primary and won the Senate seat in November.

State legislative districts are redrawn every 10 years after each U.S. census. A Board of Apportionment consisting of the governor, the state attorney general and the secretary of state draw the lines. The current boundaries were announced on July 29, 2011.

Hendren told federal investigators in an Aug. 29, 2017, statement that he was willing to testify on the meeting at Woods' corruption trial, which was held earlier this year. He was never called as a witness.

"He called the money he requested 'moving expenses,'" Hendren said of Woods' comments at the 2011 meeting, which was held at "some restaurant in Rogers where we could get coffee." No other witnesses were present, Hendren said. He said the request was for either $10,000 or $12,000, but he was not certain of the figure.

"The thing that stuck this indelibly in my mind was when he said, 'this is the way it's done,' that this sort of thing happens in politics all the time. That is the culture we have to change," he said.

Hendren is incoming president pro tempore of the state Senate. The Senate formed a select committee on ethics earlier this year.

Woods' corruption case, which also involves former state Rep. Micah Neal of Springdale, was the first in a series of indictments involving abuse of grants from the state's General Improvement Fund. Five former lawmakers stand convicted in the ongoing federal and state investigations and another -- the chairman of the Senate Judiciary Committee -- was charged by federal authorities on Friday with diverting campaign funds to his personal use. Sen. Jeremy Hutchinson resigned from the Senate after the indictment was handed up.

Hutchinson and Hendren are both nephews of Gov. Asa Hutchinson. Gov. Hutchinson played no role in the 2011 drawing of Senate boundaries, as he was sworn in to his first term in January 2015.

Much of the case against Woods was sealed during the ongoing investigation into related cases. U.S. District Judge Timothy Brooks released 532 pages of documents Friday, saying much of the information had come to light either at Woods' trial or subsequently.

Among the details revealed in Friday's release, the documents disclose that Woods, who cooperated with investigators briefly in late 2015 and early 2016, wore a wire to record a conversation he held when he met with the governor's then-chief of staff, Michael Lamoureux, on Nov. 16, 2015. The documents also disclose that federal investigators took photographs of that meeting -- and that the photographs were later discovered to be missing. There is no mention in the documents of what was said at that meeting and whether the pictures were ever recovered.

The information was found to be missing after FBI Special Agent Robert Cessario wiped the hard drive of a laptop used in the investigation.

Arkansas Health and Economic Research Inc. was incorporated on Sept. 10, 2013, according to court documents, by a friend of one of Woods' accomplices in the kickback scheme. That accomplice, Randell Shelton Jr. of Kemp, Texas, also faces sentencing this week on 12 counts.

Health and Economic Research received a $20,000 state General Improvement Fund grant on Sept. 26, 2013, 16 days after it was created. The grant had been applied for the same day the Benton-based company had been incorporated, court documents say.

A witness whose name was redacted from court records stood ready to testify that the grant money to Health and Economic Research was used "to purchase equipment used to provide treatment for Woods's father. It is also anticipated that [redacted] will testify that Shelton used GIF grant money received by AHER for personal expenses and expenses relating to Shelton's for-profit business."