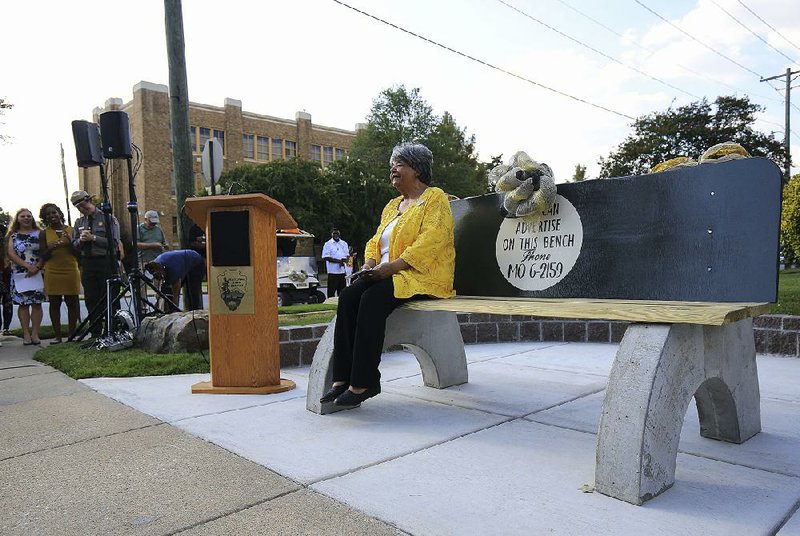 Elizabeth Eckford takes a seat Tuesday on a bench dedicated in her honor across from Little Rock Central High School. The bench is a replica of the public city bus bench where Eckford sat in 1957, surrounded by angry school desegregation protesters.

For Elizabeth Eckford, the bus-stop bench at a street corner south of Little Rock Central High School was a source of shelter from the mob protesting the school's desegregation in 1957.

Exactly 61 years later, a replica of that bench unveiled Tuesday represented both a culmination of a student-led project as well as something those students hope will inspire more stories to be told.

The Central High Memory Project student team, in collaboration with the University of Arkansas Clinton School of Public Service, the National Park Service and other partners, raised more than $25,000 in donations for the replica's construction.

The bench is the endpoint of a new oral-history walking tour of the site, for which students wrote a script and developed a mobile app.

"It was really fulfilling," Central High senior Zia Tollette, who has worked on the project since her freshman year, said of the work.

The bench's placement is the last in a series of events to commemorate the 60th school-year anniversary of the 1957-58 desegregation. But the Memory Project's work will continue, with some students, including Tollette, working on a new oral-history interview and podcast series.

That project will feature people's reflections upon visiting the site and encourage community members to share their own narratives about discrimination.

On Tuesday, a crowd gathered to trace Eckford's path. Eckford, one of nine black students to desegregate Central that school year, had gotten off the bus steps away from where the National Park Service visitor center now sits and tried to go through two different entrances to the school.

Yelled at, spat on and unable to enter the school that day, she made her way to the bench at the corner of 16th and Park streets and sat stoically and turned away from onlookers, becoming the subject of some of the most famous photos in U.S. civil-rights history.

That segment of the walking tour includes chants and taunts of protesters, as well as Eckford's own words.

"If I can make it to the bench, I will be safe," she had told herself.

Park Superintendent Robin White and other speakers thanked Eckford, who is now 76, for her grit. Memory Project team members, including leaders and Central High seniors Adaja Cooper and Morgan Hibbard, dedicated the bench to Eckford and the rest of the Little Rock Nine. Eckford recognized the students.

"Nobody claims to have a cure for post-traumatic stress disorder, but I don't cry anymore when talking about the past, and that is because of the efforts of students," Eckford said.

Finishing her remarks, Eckford sat down on the bench. She shimmied and grinned, her feet a few inches off the ground. She turned to the ribbon wrapped around the back, which was in Central's school colors -- ones that represented painful memories for Eckford.

"For a long time I avoided black and gold, but now I want a piece of this," she said.