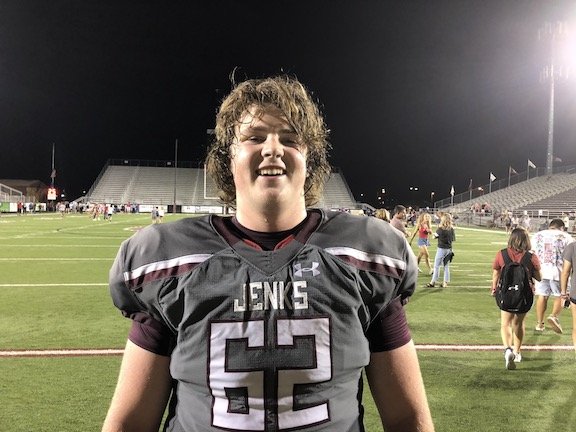 Offensive lineman Brandy Latham recently received a scholarship offer from the University of Arkansas and Tuesday night he orally committed to the Hogs.

“I thought it over with my family and coaches and some mentors in my life and I just felt like it was the place for me,” Latham said. “The people down there are really nice. It’s close to home. Great school, great facilities.”

Latham, 6-5, 290 pounds of Jenks, Okla., picked the Razorbacks over offers from Utah State, New Mexico, Missouri State and others.

Latham’s father Bob was an All-Big Eight center for Oklahoma in the late 1980’s. His father and mother are happy with their son’s decision.

“My dad is excited for me and I think my mom is really excited because I’m really staying close to home,” Latham said. Latham is looking forward to being coached by offensive line coach Dustin Fry.

“Every time I’ve talked to coach Fry, it’s been awesome,” Latham said. “He seems like a really nice guy, really cool guy. He seems to know a lot about the offensive line and very knowledgeable.”

He’s locked into being a Razorback regardless what other schools might come along.

“I’m all for Arkansas,” Latham said.

Latham is the Hogs’ 19th commitment for the 2019 class. Oral commitments are nonbinding.

Ricky Barrientos scored three goals in leading Hendrix College to a 4-2 victory over Belhaven on Tuesday in Conway. Barrientos goals came in the seventh minute, 47th minute and 86th minute. Jack Butler added an unassisted goal in the 60th minute.

Jack Savage scored in the 85th minute to lift Harding University to a 2-1 victory over William Jewell at the Stevens Soccer Complex in Searcy.

Jason Diaz scored the game’s tying goal for Harding in the 30th minute after Williams Jewell’s Teddy Gifford opened the scoring in the third minute.

The Wonder Boys shot a 291 in the final round and finished with a 54-hole total of 878, beating Southeastern Oklahoma State by nine strokes.

Shawn Tsai won the individual title for the Golden Suns with a 4-under-par 212 after shooting a 76 on the final day. Kellen Gray of Arkansas Tech finished eighth, with an 8-over 224.