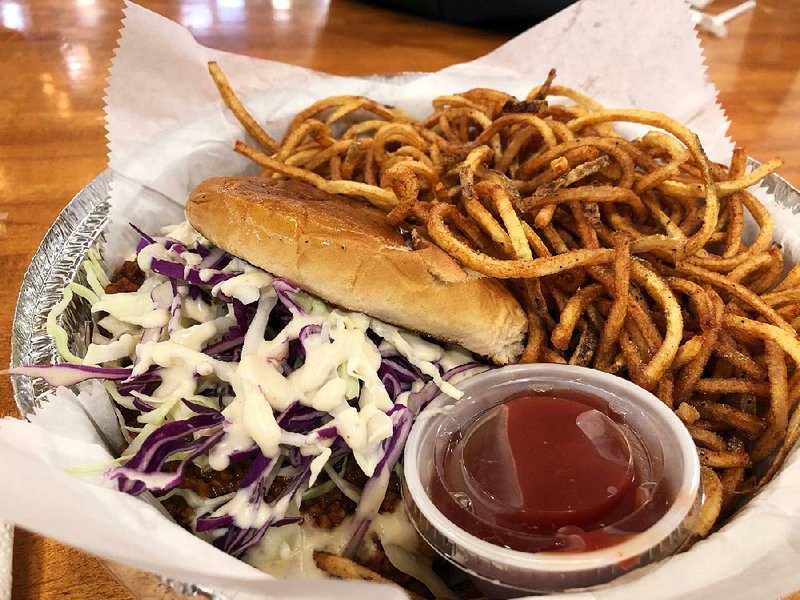 For $10, a Sloppy Joe with a side of Spiral Out Fries and a tub of ketchup fills a 9-inch, deep dish aluminum pie plate at Blue Sage Vegan Bistro.

Order off the menu at Bangkok Thai and Katmandu MoMo; check the buffets at Middle Eastern Cuisine and Indian Feast -- Indian Feast eagerly sautes something if they're out. Big on Tokyo, Casa Manana Taqueria and Garden Square Cafe are options, too.

But Ottenheimer Hall hasn't had a full-on vegan counter since 2016, when The Veg left -- sob! -- on its ill-fated venture into storefronts.

Until now. In the niche formerly filled by Mason's Grill is Blue Sage Vegan Bistro, the indoor incarnation of Phoebe Glass and Amir Salem's Shambala food truck. Everything behind the counter eschews meat, fish, dairy and eggs, including every employee.

That does not make the menu low-calorie or high-fiber. While crunchy customers line up for the SupaFresh Bowl and cauliflower "wings," less health-driven people are giving the daily chalkboard menu a look too: Hello, mountain of deep-fried potatoes.

Blue Sage serves freshly fried shoestring spuds nicknamed Spiral Out Fries. These tan tangles start with whole potatoes: The cook, usually Salem, impales a tuber on the nose of a stand-up mixer fitted with an attachment that unspools the starch like yarn. A quick sizzle in a fry bath later, and the fries emerge more crisp than oily, needing only a dash of salt.

Generous piles make a filling side for an entree, or they stand alone. Accompanied by a little tub of ketchup, "Reggie style" Spiral Out Fries fill a 7-inch, deep-dish aluminum pie plate for $8. For yuks, ask Glass and Salem what Reggie means.

As a dry base topped with white and red raw cabbage slivers, beans and Cheeze (think nutritional yeast and cashew cream) Spiral Out Fries become Frito Pie, $10. The menu includes a "Kitchen Sink" version, which lets the cook toss on whatever tidbits are available.

I tried to eat them as the Headie Spaghetti, $10. Served on white paper in a very full 7-inch aluminum pan, this not-spaghetti transported me to the Arkansas State Fair. The Spiral Out Fries were studded with cauliflower fragments cooked in the Buffalo-flavor breading used in Blue Sage's faux wings, aka Buffalo Bytes. Drizzles of orange Cheeze and white aioli bind the heap, and a sprinkle of sliced green onions brightens its color palette.

But after a few bites, my anatomical palate decided the whole thing tasted "tan." I pecked in about a third, and the rest went to live in the compost.

But I will reorder everything else I have tried at Blue Sage (already have in two cases). Writing this, I'm remembering that $8 SupaFresh Bowl: They layer half the bottom of a pie plate with raw spinach and the other half with quinoa; a hefty scoop of chickpeas follows, joined by an equal scoop of diced carrots and celery. Then comes a spiral of aioli across the top -- or, if you ask, a tub of aioli on the side.

Buffalo Bytes are $8, or $10 with a tangle of Spiral Out Fries. A few sticks of raw carrot and celery on the side make a pretty complement. Shaped like little wings or drumsticks, these Bytes come in Buffalo or barbecue flavors. They do not taste like chicken. But they also don't taste at all like cauliflower. Tangy and with an interesting, subtle moment of "yield" in their texture, they're mellow-mild and not at all spicy. But could be my Scoville sensor has been wrecked by a hot sauce habit.

Glass warns that if you let the Bytes sit around, the cauliflower steams inside its succulent coating, the "bones" soften and that cole-crop taste comes out. None of the Bytes I've bitten got time to sit around.

The Blue Sage Sloppy Joe can be small, for $6, or large, for $8. Add fries for $10. Topped with red and white cabbage slivers and drizzled with aioli, ground-beef-like crumbles -- texturized soy protein -- mingle in a umami-favorful sauce that soaks the bottom half of a griddle-toasted burger bun. Here's the right way to eat this bun: Shovel up the overflowing crumbles and cabbage with your biodegradable fork; heft the bun between both hands and flip it over. Eat the Joe upside down. Or you could carry a hand towel and stop every two bites to swab yourself.

The Blue Sage not-fish tacos also use a faux meat product, but everything else on the menu is cut from whole plants. That means you should always expect a little wait for your order; the longest I've stood around was 12 minutes during the noon crunch. Take a table and Glass will find you when the food's ready.

I haven't tried those not-fish tacos yet. But I can tell you the Don't Be Chick'n sandwich is $8 ($10 with fries) and comes in a Reggie, Buffalo or barbecue flavor. I tried the Reggie style: Sandwiched between caramelized Texas toast were two leaves of lettuce, two slices of slicer tomato, two slabs of not-chicken fried in a salty, peppery flour breading, and aioli. I was surprised to learn the tender-crisp fillets were cauliflower. I had no idea.

Peripheral offerings vary. Check the daily posts on the Facebook page, "Blue Sage Vegan Bistro." For instance, some days there are take-away tubs of Black Eyed Pea Hummus for $6; add $1 for Ritz crackers and squash.

Cornbread pudding, available with or without gluten for $3 a heap, was a buttery-tasting wreck of cornbread when I met it, and steeped in a sauce that must have included mashed fresh strawberries. Sweetened with brown sugar and a hint of something like rum and butter, it was very rich.

Not yet sparkling but already refreshing, infused water is $1 a glass, with or without ice. The flavors entice: cherry lemonade, cucumber, watermelon basil. You can have a straw, but they're sorry they can't give you a lid. Their start-up order of biodegradable lids don't fit the biodegradable cups.

But otherwise, Blue Sage has got those vegan cravings covered.