A boon to bees

Honeybees depend on humans for pollen and nectar — spring, summer and fall by ADRIAN HIGGINS The Washington Post | September 8, 2018 at 1:58 a.m. 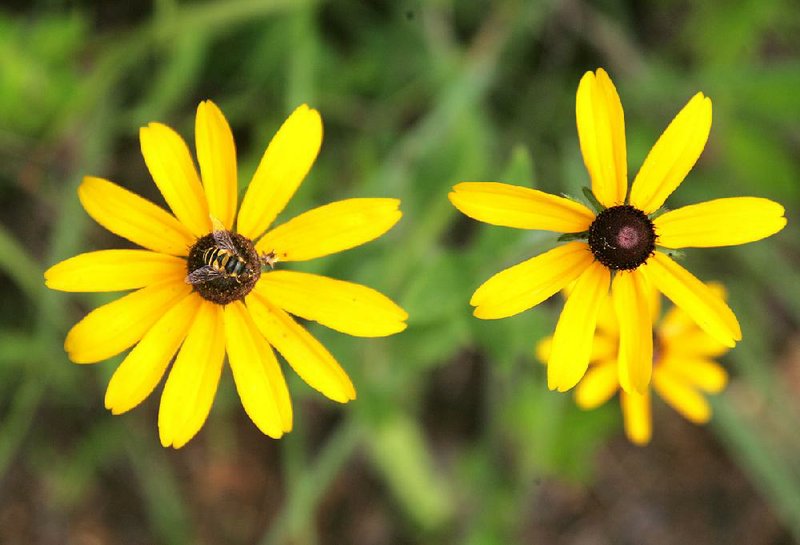 A honeybee lands on the center of a black-eyed Susan.

Carin Celebuski is a beekeeper and horticulturist who moved from a small yard in suburban Washington two years ago to an 80-acre farm north of Baltimore.

You might think that shifting beehives from the cramped city to the expansive country, with all its wildflowers and agricultural crops, would generate an abundance of honey from fat and happy bees. Instead, the yield dropped by almost half. This didn't come as a surprise to Celebuski, who is creating a cut-flower farm in Monkton, Md. "It still disappoints, though," she said.

Bees in urban and suburban areas have many sources of nectar and pollen from the blooms found in residential, commercial and public landscapes. The sheer density of flowers per acre is greater than in rural areas, but for the most part it's an accidental bonanza. The nectar-bearing plants are there for our benefit, not the bees'. Bees may fly as far as three miles to forage, and in that respect, we are all beekeepers.

General pollinator gardens are trendy as a way to draw beneficial and interesting wildlife, including bees of all stripes, butterflies, dragonflies and hummingbirds. But honeybees are unusual in their year-round presence and in their large numbers, and the gardener can tailor practices to their needs.

Honeybees are not indigenous insects, which may count against them in an age of ecological nativism, but they have been husbanded in America for centuries, and we have come to rely on their pollination skills for our food.

They are miraculous creatures, with a single hive containing thousands of industrious individuals driven by the needs of the colony. But they are also fragile, subject to new parasites and diseases, and my beekeeping friends tell me they are finding it harder to survive through the winter than in earlier periods of honeybee cultivation.

Winter loss was a consistent problem when I kept bees for several years and was one of the reasons I quit. But I still get a big thrill out of seeing worker bees foraging, and setting out a table for them is the next best thing to keeping them (and without the work).

Early-season flowers offer welcome sustenance to overwintering bees that are lured out on days above 50 degrees in late winter and early spring. Providing blooms then can be of great help.

Bulbs are an obvious and easy way to do this, and candidates include snowdrops and crocuses, especially "Tommies" (Crocus tommasinianus), which form self-seeded colonies over time. They are followed by other fall-planted spring bulbs: species tulips, glory-of-the-snow, scilla and grape hyacinth.

The rising popularity of the perennial known as Lenten rose and its related hybrids has been a boon to bees because of its appearance as early as February in mild years.

From mid-April to mid-June, honeybees rely much less on garden flowers; it's a period when flowering shade trees provide the main supply of nectar for the entire year, allowing the bees to build up their stores for the following winter. It is during this nectar flow that beekeepers harvest their own supplies of surplus honey.

After that, it falls to gardeners to provide a smorgasbord of blossoms from July to late October to keep the bees from tapping into the reserves they need for winter.

As the long purple coneflower season winds down, the black-eyed Susans take over. The related giant coneflower (Rudbeckia maxima) is a spindly thing, growing to seven feet or more, but its oversize daisies bloom for several weeks into August. It should be placed at the back of the border in a grouping. Sweet coneflower (R. subtomentosa) grows to a more manageable four feet with clusters of small golden daisies, and it steps on the stage as the giant coneflower leaves it, flowering the entire month of August.

If you can provide good drainage, the lesser calamint (Calamintha nepeta) is a valuable, fine-textured, mint-scented perennial smothered in tiny pale lavender or white flowers from July until fall. Plant it as a filler or an edger but always generously. Regular garden mint and other summer herbs, especially borage, also draw summer bees.

Russian sage, or perovskia, blooms for a full two months until mid-September or longer, and its tiny violet-blue blooms are beloved by honeybees. Caryopteris, or bluebeard, is another shrublike perennial whose clusters of purple-blue blossoms appear amid the foliage in August and September. Honeybees love it.

Annuals offer a bridge from summer to the fall, and some of my favorite bee plants are the Mexican sunflower (tithonia), along with single-flowered dahlias, zinnias and lantana.

In the vegetable garden, honeybees turn September-flowering garlic chives into a seedy nightmare, but there's no doubt the chives are of value to the insects then.

When I kept a couple of hives, I found it especially heartening to see honeybees on flowering perennials in September and October, knowing they were fattening up for winter. The showy stonecrop reminds me of clumps of broccoli, except the bloom heads are a dull pink-red. A plant for well-drained soil, it is known botanically as either sedum or hylotelephium. The popular varieties Autumn Joy, Matrona and Vera Jameson all bloom from the end of August to the beginning of October.

No late-summer plant is more useful to bees than the goldenrod, and many compact varieties have been bred to bring a garden quality to the plants.

Asters then take up the heavy lifting. As long as you have a sunny site and good drainage, you can't go wrong with these perennials whether you want bees or not. I am partial to a few superior performers, namely Raydon's Favorite, Bluebird and October Skies. These all peak in late September and bloom fully for a month. The tatarian aster, by contrast, is upright to six feet and expands into large clumps in time, much as Joe-Pye weed. The blooms remain showy past Halloween. Jindai is a smaller variety.

Calico aster is tall, too, but with the tiniest daisies on arching stems. The species is called Symphyotrichum lateriflorum, but look for a couple of garden varieties, Lady in Black and Coombe Fishacre.

Tender and half-hardy salvias bloom from June to October and attract all kinds of pollinators. Every garden should have the Mexican bush sage, which doesn't hit its stride until late September.

It may be surprising to know that honeybees need to drink. Beekeepers pay careful attention to sources of water, in part to direct bees away from properties where neighbors don't want them.

Providing a reliable source of water for bees will help them, but there are a couple of things to bear in mind. Position a water source in a way that avoids conflicts between people and the bees' flight path; a favored watering hole could attract many bees.

Once you provide water, maintain the supply. Change the water regularly to keep it fresh and to avoid problems with mosquitoes. Bees are not good swimmers and will drown in water that's too deep. A shallow-sided birdbath will work. If you have a pond, lily pads or some other surface vegetation will provide a perfect landing spot.

The greatest assistance you can give to bees is to avoid using pesticides. Pyrethroids, commonly used against insect pests, including mosquitoes, are highly toxic to bees as well as aquatic life.

Neonicotinoids, or neonics, are a class of systemic pesticides that are also toxic to bees, killing them outright or affecting their ability to function. (In April, the European Union banned the outdoor use of three neonics.)

Some nursery-grown plants are treated with neonics, even at the seed stage, to ward off sucking insects such as aphids. But the toxins remain and are taken up by the flowers. You can protect bees by buying plants from retailers that have pledged to sell neonic-free plants.

The last thing you can do is for yourself. Set aside a few minutes in the garden this summer and fall to watch a honeybee at work. If you are still and quiet, the bee will ignore you. The sound and the movement of the bee are free theater. Like any great performance, we are enriched by it. 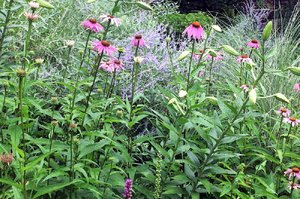 Photo by The Washington Post/ADRIAN HIGGINS
These plants are a summer cornucopia for bees, with coneflowers, Russian sage, lilies and liatris. 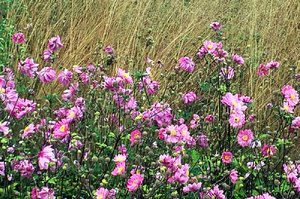 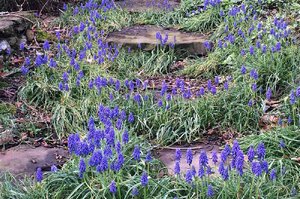 Photo by The Washington Post/ADRIAN HIGGINS
Grape hyacinths are another useful early spring bulb planted in early fall. The more the merrier. 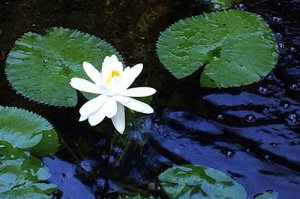 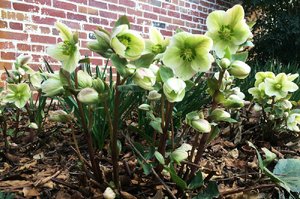 Photo by The Washington Post/ADRIAN HIGGINS
Hellebores make an appearance as early as February and bloom for weeks in late winter. 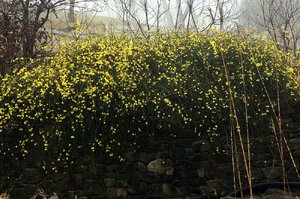 Photo by The Washington Post/ADRIAN HIGGINS
Winter jasmine at its peak flowers a full month before the start of spring. 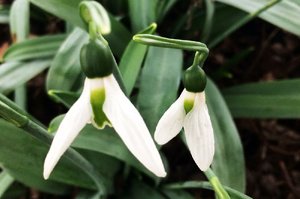 Photo by The Washington Post/ADRIAN HIGGINS
Honeybees emerge in winter when temperatures are above 50 degrees. Early blooms such as the snowdrop can be of vital help.

Print Headline: A boon to bees